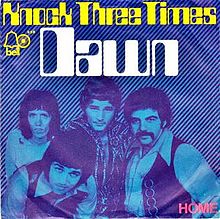 One year before the ’72 presidential election, South Dakota Senator George McGovern visited La Crosse during the fall fest.  At the time, McGovern was one of several Democrats challenging Republican President Richard Nixon for re-election.  But McGovern would become his party’s nominee the following summer.  McGovern toured the festgrounds for about 20 minutes, and gave a campaign button to the wife of La Crosse Mayor Peter Gilbertson, who was in his first year on the job.

La Crosse Festivals director Jerry Miller said more festgoers than ever were participating in some of the traditional Oktoberfest events in ’71, such as horseshoe pitching and square dancing.  Arrests were down from the year before, but the Holiday Inn on the pike reported its worst damages ever for an Oktoberfest.

Janis Joplin had a number 1 hit five months after her death, with the song “Me and Bobby McGee.”  The group Dawn topped the charts with “Knock Three Times,” before there was even officially a group.  On that record, Tony Orlando was backed by studio singers.  Telma Hopkins and Joyce Vincent Wilson were hired so the trio “Tony Orlando and Dawn” could perform concerts in 1971, yesterday in La Crosse.