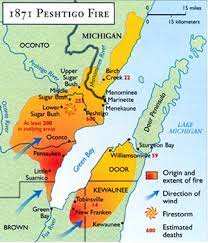 You’ve heard of the Great Chicago Fire of 1871…but there was another large fire, in Wisconsin, on the same day, yesterday in La Crosse.

October 8th marks 150 years since devastating fires caused death and destruction in Chicago…and in the woods of northern Wisconsin, at Peshtigo.  Strong winds have been blamed for causing small fires in Peshtigo to spread along the Lake Michigan shore.  At least 12-hundred people are thought to have died in the Wisconsin fire.    The Chicago fire of the same night claimed about 300 lives, and experts think that fire was caused by the same conditions that led to the blaze in Peshtigo…not by a cow in a barn.  Another theory suggests that both fires were caused by debris from a comet, or by meteorites.    A Madison newspaper from 1871 carries headlines about the Chicago fire such as ‘The Fire Fiend’ and ‘Terrible Calamity.’  The paper also ran a statement by Wisconsin Governor Lucius Fairchild, pledging ‘provisions and money’ to victims of the Peshtigo area fires.

Fairchild was finishing his third term as governor, and did not run again that fall.  The new governor elected in November was a former Congressman living in La Crosse…General Cadwallader Washburn.  He won the governor’s race in 1871…yesterday in La Crosse.