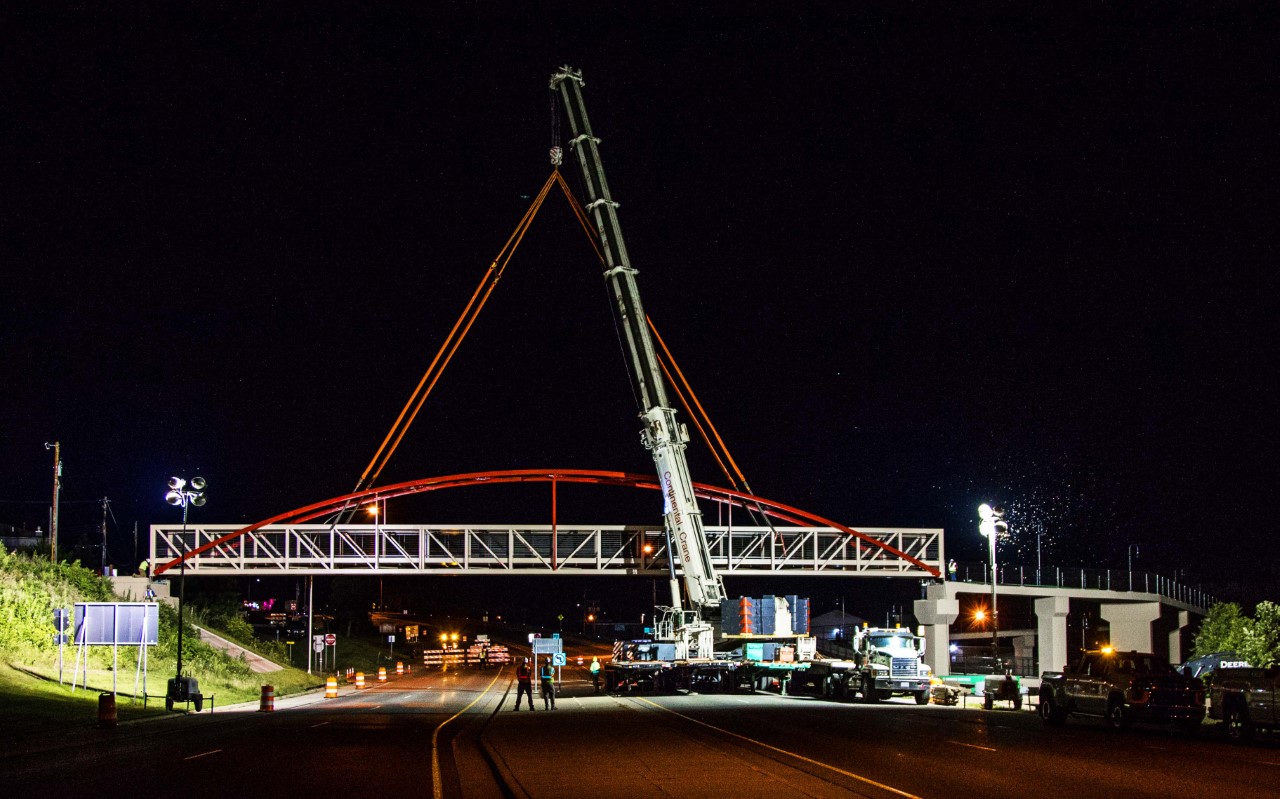 Throughout the night on Aug. 4, 2022, and into the next morning, workers install the new bike bridge in La Crescent, Minn. (CONTRIBUTED PHOTO: Ken Truax)

The city has been wanting to focus on building and improving biking and pedestrian trails for over 20 years but, at the state level, the focus was on improving conditions for motorized vehicles, so funding to help build these trails was not available.

Now, that is changing, and communities are seeing a bigger push to provide safer and more expansive options for those choosing to walk or bike.

Robbie Young, the owner of Coulee Bicycle Co. in Onalaska, says that it’s an important shift in thinking.

“It’s an important statement to say we are investing in this infrastructure,” Young told WIZM. “Realizing that for many years all we ever did was invest in infrastructure that only serves automobile transportation.”

The bike bridge is Phase 3 of a four-phase project to create a bike and pedestrian trail through La Crescent. Using the Wagon Wheel Trail, an old stagecoach road, the first and second phase of the project involved making improvements and expanding the road to make a usable bike path.

The third phase was to connect the trail to the city, which is where the new bike bridge came in. The fourth phase will involve expanding the trail down to the new La Crescent event center and hotel.

There are plans to continue the expansion in the future, with the hopes of getting a bike connection to the Root River Tails in Houston and Fillmore counties.

“I think sometimes it can be difficult to conceptualize things like this, but when you start to see the pictures and the maps, the connection between the communities becomes that much more real.” Young said.

Not only do these trails provide the community with more recreational opportunities, it also allows better access to stores and restaurants for those who choose biking or walking as their main form of transportation.

“People do travel here from all over to recreate on their bikes, but people locally are moving about their lives as well,” Young explained. “For a very long time we treated bikes as an exercise tool or a kids toy, when they are a perfectly capable solution to doing your day-to-day stuff.”

According to La Crescent Mayor Mike Poellinger, safety played a major role in the decision to build the bridge.

“Anybody that has tried to get through that intersection, it’s dicey,” Poellinger said on WIZM. “We really started reevaluating how can we make this safe for our young people, our seniors, who are trying to get across the highway.”

It’s not just the intersection where safety is a concern. Bike lanes throughout the city can feel dangerous with cars closely passing by.

“It’s about comfort and feeling safe,” Young said. “There’s already pretty safe ways to get across to La Crescent, but it doesn’t feel very safe. You feel very exposed sitting on the side of a four-lane highway.”

Poellinger added that that the local communities are working together to bring more bike options to their members, and providing access for travel between cities.

“Right now we are getting a new, up-to-date agreement between all the communities called a joint powers agreement to work together to develop a common goal with one thing in mind, which is a corridor connection,” Poellinger said.

While this will take time, the bike bridge project is the first step in a community shift toward alternative transportation.

“It’s very inspiring to see a community the size of La Crescent recognize the value in inter-city connections,” Young said. “To say, ‘We recognize that people can ride between La Crosse and La Crescent and we want to enable that.’

“It’s a lot of forward thinking.”