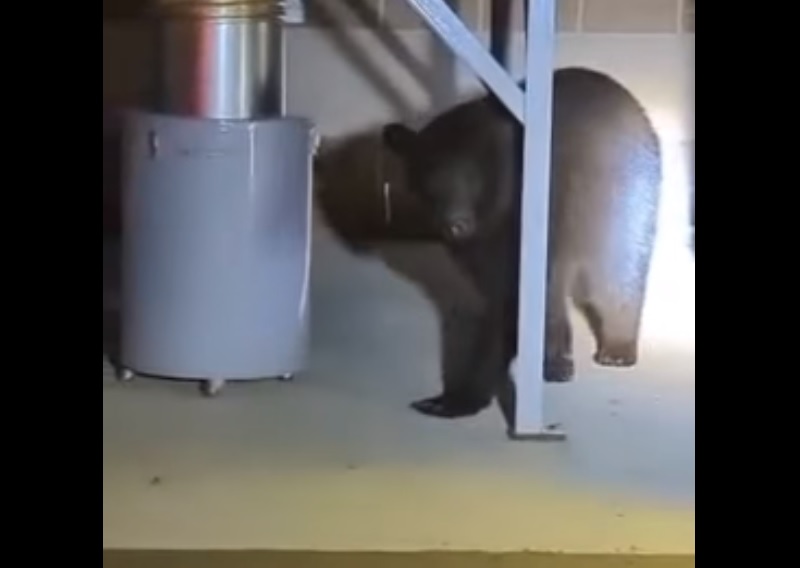 A bear wandered onto a La Crescent property on Sunday, May 15, 2022. (PHOTO: Screenshot from video shared by La Crescent P.D.)

If there was anyone on the La Crescent Police Department that wanted to get the call that a black bear was wandering through town, it would be Sergeant Michael Ernster.

Of course, he wasn’t the one to get that call, as a black bear made its way through La Crescent late Sunday night.

“Yeah, I’ll be honest, I am a little bit jealous,” Ernster, who’s been with La Crescent Police for 20 years, said Monday on La Crosse Talk PM. “I’ve never seen a bear in town before and those are the calls that I love but it’s just one of those things.”

Instead, officer Cody Bellock “guided” the bear out of town, as the La Crescent Police put it.

“He just slowly followed the bear as it lumbered through,” Ernster said. “It actually stopped and snacked on a few bird feeders.”

The video shared by the police department appears to be the bear at the high school on the south end of town, though Ernster thought it may have started downtown — maybe for some Corky’s Pizza.

“Well, to get to that location (by the school), it pretty much had to go right through downtown, unless it came across, down the river and cut up,” Ernster said. “It was down by the high school and stuff — the south end of town — but it definitely was residential. From where it was seen to where it exited, it probably walked through 30 yards, I would say.”

One commenter on Facebook said, “Bear popped back into pasture through Marty Zadow’s barb wire fence around 11:30 p.m. — through the yard at approx 1414 Willow St. Headed for Skunk Hollow, where he disappeared into township for night.”

And while Ernster would have loved to get the call — and would not have brought his dog named “Damnit” with — he did appreciate how well Bellock did as the bear’s chaperone.

“You could tell from the video, I think that the bear looked to be about 15 feet away from his squad car,” Ernster said. “So, I think he was having a little fun with it, too, and the bear didn’t seem to be too active on anything.

“I think he just followed behind, he gently just escorted it the right direction and followed it to where it needed to be to make sure there wasn’t any issues.”

Ernster said he hasn’t heard of a bear in town in his 20 years with La Crescent Police, but the department did post that it happens.

“Although it is rare to see black bears in our area, they do wander through from time to time,” La Crescent Police posted. “The best way to avoid problems with bears is to not attract them in the first place. If you see a bear, do not approach it.”

Police also posted some recommendations from Minnesota Department of Natural Resources conservation officer Tyler Ramaker, saying “moving attractants such as garbage cans, bird feeders, grills and pet food to the inside of your garage where a bear would not have access to it. If the bear cannot access food attractants, it is more likely to continue moving through the area without incident.”

The DNR added that “bears are wary of people and not normally aggressive. They are, however, large, powerful and surprisingly fast-moving animals. Anyone who encounters a bear should have a healthy respect for it, but, at the same time, do not feel that it is an inherent threat.”