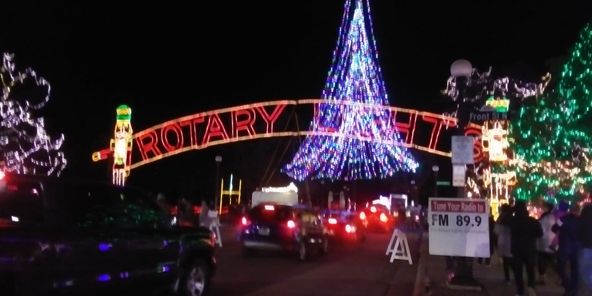 The 27th season of Rotary Lights in La Crosse has started with the traditional parade, fireworks, and illumination of Riverside Park.

Following the 6 p.m. parade downtown, Santa Claus arrived at the bandshell to throw the switch, which set off fireworks in Pettibone Park, and turned on millions of Christmas lights along the riverfront.

The opening ceremony introduced two new walking light-bulb mascots, a male bulb named Kilo Watt and a female bulb named Katie Watt. The names were chosen from dozens submitted by the public in a contest.

The main purpose of Rotary Lights is to collect food for area pantries, and event president Pat Stephens says that went well even in 2020, when the pandemic put some limits on holiday activities, with 340,000 food items collected.

The parade from Main Street to Riverside Park started an hour later than usual this year, to get rush-hour traffic through downtown before the event. It was called off last year because of COVID-19.

Rotary Lights will run 36 nights in 2021, operating every night through New Year’s Eve.