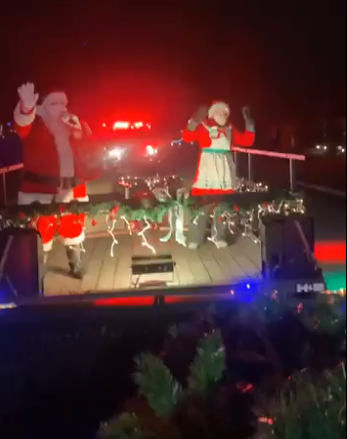 Finding a new way to bring cheer in a pandemic, the City of Onalaska found success with its continuous Santa Parade.

On Tuesdays and Thursdays in December, Santa could be seen on various routes throughout the city escorted by the fire and police department.

“It really has been a nice break to have something to look forward to for all of our neighborhoods,” Onalaska Mayor Kim Smith said. “I don’t think it is just exciting for the children. I think the parents, and I know the city staff and myself have been excited to have this opportunity.”

She said they were fortunate to brainstorm ideas with Santa about what to do in the community this winter.

“It is something that we’ve never done before, but we’ve definitely had great feedback,” Smith said. “A lot of people enjoy seeing the police and fire truck as well as Santa.”

She said some residents were surprised when they heard the sirens and lights coming down their streets, but quickly grabbed coats to run outside and give the face of Christmas a wave.

“I think this year more than ever, it is very heartwarming, and a wonderful experience for everyone in the community to get outside and have something interesting happen,” Smith said. “Hopefully, we spread a lot of good cheer that way this year.”

She thanked Santa for making himself available for the parades, noting they’ve made improvements each separate night.

“We are learning as we go to the benefit of the community.”

The final parade will be Tuesday from 5:30 p.m. – 7:30 p.m. Those who missed Santa coming down their streets are welcome to find a park or parking lot on the parade route, but the city does ask that people wear masks and stay socially distant.