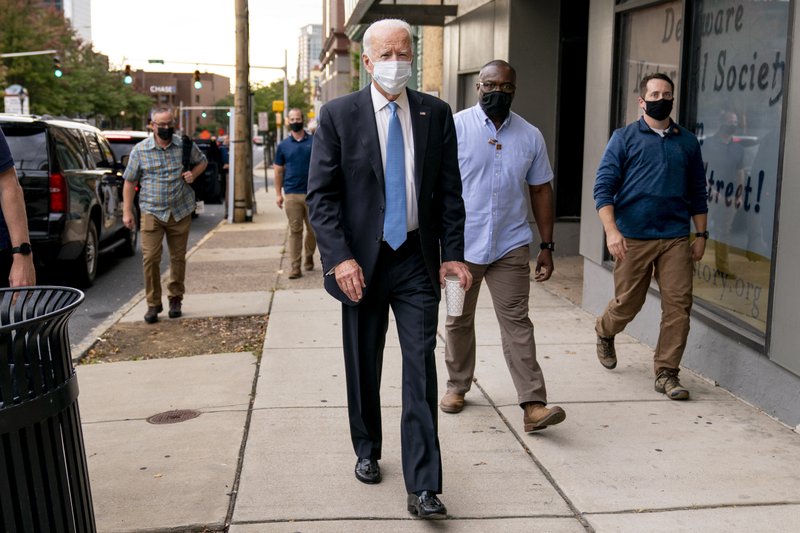 Democratic presidential candidate former Vice President Joe Biden stops to speak to members of the media as he walks out of the Queen Theater in Wilmington, Del., Thursday, Oct. 1, 2020, after pre-taping his speech for the Al Smith dinner. (AP Photo/Andrew Harnik)

The Republican leader said in a tweet the two “talked business” on Friday.

“Full steam ahead,” McConnell said about the Senate GOP’s plans for quick confirmation of Trump’s nominee Amy Coney Barrett to the Supreme Court.

The leader made no reference to ongoing talks on an a broader coronavirus relief package.

Democratic presidential nominee Joe Biden has been tested for the coronavirus in the wake of President Donald Trump’s infection and is awaiting results.

That’s according to a source with direct knowledge of the situation who spoke on the condition of anonymity to share internal discussions.

Biden was on the debate stage with Trump for more than 90 minutes earlier in the week.

It’s unclear if Biden will appear at his scheduled campaign events later in the day. The Democrat’s campaign is expected to announce the results of Biden’s test and his travel plans later Friday.

Chief of staff Mark Meadows says more White House staffers are expected to test positive for the coronavirus. He made brief remarks to update reporters on the health of President Donald Trump and first lady Melania Trump who have contracted COVID-19.

Meadows said the president was experiencing “mild symptoms” from the coronavirus, but would not describe them and did not provide details about any treatments that Trump or the first lady were being given while quarantined at the White House.

“They remain in good spirits,” he said.

Despite the startling news, Meadows said it was business as usual at the White House. He started his remarks by commenting on the most recent jobs report. He said Trump’s first question to him this morning was, “How’s the economy doing? How are the stimulus talks going on Capitol Hill?”

Meadows said the core staff members at the White House have been tested.

“I fully expect as this virus continues to go on, other people in the White House certainly will have a positive test result,” he said.

House Speaker Nancy Pelosi says she’s praying for the president and hopes his testing positive for COVID-19 might be a “learning experience” about the virus.

“Let us all pray for the president’s health,” Pelosi said on MSNBC. She added, “This is tragic, It is very sad.”

The speaker said she was tested out of caution and is awaiting results. But said warned against “brazen” behavior that allowed “something like this to happen”

Harris tweeted Friday that she and her husband, Doug Emhoff, are “keeping them and the entire Trump family in our thoughts.”

The California senator and running mate to Joe Biden took a routine test Thursday, and tested negative for the coronavirus. She was not in Cleveland on Tuesday night when Trump faced Biden for the first presidential debate of the campaign.