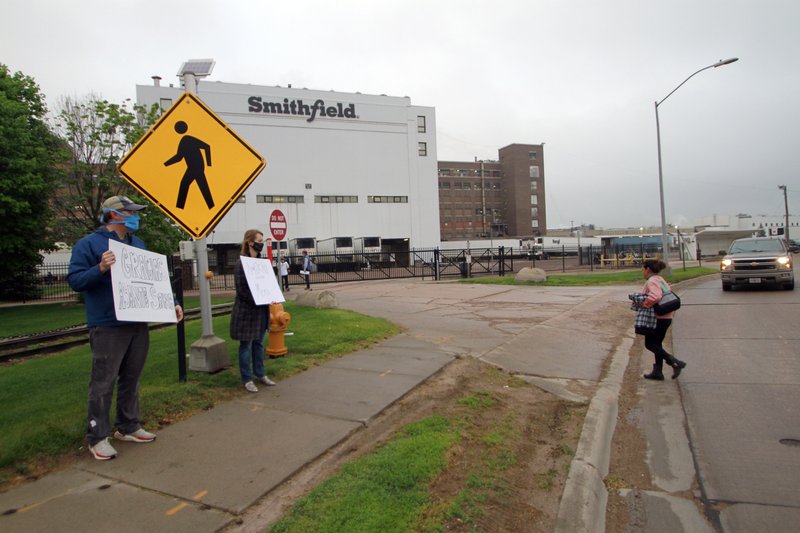 FILE - In this May 20, 2020 file photo, residents held thank you signs to greet employees of a Smithfield pork processing plant as they returned to their shifts after the plant had been closed because of a coronavirus outbreak in Sioux Falls, S.D. A new report studying the impact of the coronavirus on workers at meat processing plants has found that 87% of people infected were racial or ethnic minorities and that at least 86 workers have died. The report released Tuesday, July 8, 2020, by the U.S. Centers for Disease Control and Prevention examined more than 16,000 COVID-19 cases at 239 plants in 21 states. (AP Photo/Stephen Groves File)

A new report studying the impact of the coronavirus on workers at meat processing plants has found that 87% of people infected were racial or ethnic minorities and that at least 86 workers have died.

The report released Tuesday by the U.S. Centers for Disease Control and Prevention examined more than 16,000 COVID-19 cases at 239 plants in 21 states. It offers perspective on how the virus devastated U.S. pork, beef and poultry processing plants, but the figures likely understate the problem as Iowa officials declined to participate in the study.

“The effects of COVID-19 on racial and ethnic minority groups are not yet fully understood; however, current data indicate a disproportionate burden of illness and death among these populations,” the CDC said. “Ongoing efforts to reduce incidence and better understand the effects of COVID-19 on the health of racial and ethnic minorities are important to ensure that workplace-specific prevention strategies and intervention messages are tailored to those groups most affected by COVID-19.”

The agency said about 9% of more than 112,600 meatpacking plant workers at plants in 14 states came down with the illness caused by the coronavirus. The percentage of workers with COVID-19 ranged from 3.1% to 24.5% per facility.

“This new CDC report makes clear what UFCW has been saying for months. The COVID-19 pandemic is far from over and its impact on front-line workers — especially workers of color — is continuing to increase,” he said. “American workers simply cannot survive with the current patchwork of safety measures put in place by a fraction of companies and states. Without a strong national standard, millions of workers are still unprotected and vulnerable.”

The union, which represents over 250,000 workers in meatpacking and food processing, said the CDC data is consistent with its data but likely under counts those affected since the data comes from fewer than half the states. The union said at least 76 workers deaths have been reported at plants it represents and 15,682 workers have been infected or exposed.

A spokeswoman for The North American Meat Institute, a trade group for the meat processing industry, did not immediately respond to a message. The animal slaughtering and processing industry employs an estimated 525,000 workers in about 3,500 facilities nationwide.

The CDC noted that Iowa was among the states that didn’t contribute coronavirus-related meat processing plant data. Iowa is the nation’s leading pork producer and has about a dozen large-scale meat processing plants. Many had outbreaks sickening hundreds of workers. The Iowa Department of Public Health did not respond to a message seeking comment on why the state didn’t provide the CDC with data.