Senate to convene with risks due to no quick virus testing 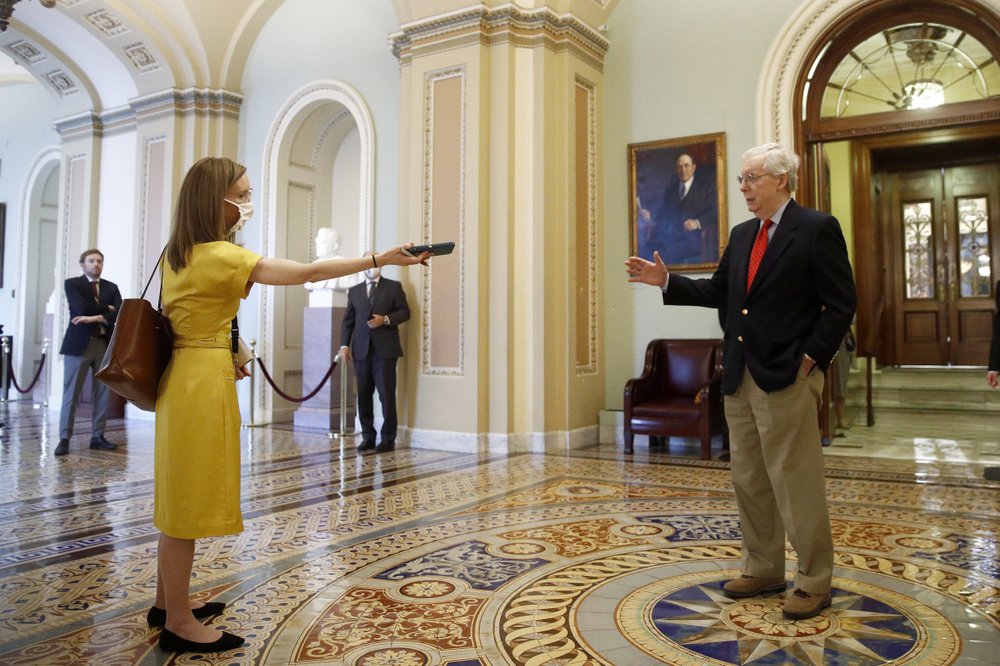 WASHINGTON (AP) — The Senate is set to convene Monday but the health risks from the coronavirus are being laid bare as the Capitol physician says there is no way to quickly test the 100 senators and staff.

It’s a high-profile snapshot of the national testing shortfall as the Trump administration strives to resume business as usual to kick-start the economy.

“The sooner we can have testing, the safer we’ll be,” Senate Democratic leader Chuck Schumer said Thursday on “The Late Show with Stephen Colbert.”

As Congress prepares to partially return next week, the legislative branch will be a changed place, after all but shuttering for more than a month amid the virus outbreak.

Senators are being advised to wear masks, stay six feet apart and keep most of their staff working from home, according to official guidance provided to top staff.

Republicans will resume their private lunches, but it will be just three senators to a table. Democrats will have lunch by conference call.

Testing though, and the stark lack of it, is sounding alarms.

On a conference call Thursday, the Capitol physician said his office does not have a testing system available for instant virus checks, as happens at the White House, according to a Republican familiar with the call with GOP chiefs of staff.

Instead, the physician said the office only checks those lawmakers who are showing symptoms. Test results can take up to seven days, he told them.

The U.S. Capitol remains closed to visitors, a shutdown extended to mid-May, and the Washington, D.C., region remains under stay-home orders.

“This is a dangerous moment in our region,” said Rep. Jamie Raskin, D-Md., whose district includes the surrounding suburbs that are home to many federal workers.

While the Senate has scheduled key public hearings, guidance from the Senate Rules Committee says people can view the proceedings online. Several House committees are also expected to hold hearings.

The House declined this week to bring its 400-plus members back into session after the Capitol physician warned it was not worth the health risks.

McConnell has declined to say if he consulted with the physician in deciding to resume Senate operations.

“I think we can conduct our business safely,” McConnell said this week on Fox.

Lawmakers are especially concerned about the hundreds of cooks, custodial staff and maintenance workers needed to run the vast Capitol complex, many who commute from the region that remains a virus hot spot.

A memo from the Office of the Attending Physician said it “continues to recommend teleworking for all Congressional offices.”

But one Republican, Sen. Mike Lee of Utah, in a strict reading of the Constitution, said lawmakers must be present.

“If some of my colleagues in the Senate are really concerned that they won’t survive the process of doing what they were hired to do, then perhaps they should consider another line of work,” Lee said in a statement.

As Congress considers the next coronavirus aid package, the Senate’s attention will largely be focused on what McConnell calls the “personnel business” — confirming the president’s judicial and executive branch nominees.

Among those are Justin Walker, a McConnell-backed nominee for the U.S. Court of Appeals for the District of Columbia Circuit, often seen as stepping stone for future Supreme Court nominees.

Also facing a nomination hearing will be John Ratcliffe, the Republican congressman from Texas who is President Donald Trump’s choice to be the new director of the Office of National Intelligence.

Schumer said the Senate instead should focus on congressional oversight of the federal coronavirus response.

For the next aid package, Speaker Nancy Pelosi said the states and cities are seeking as much as $1 trillion to prevent layoffs as costs skyrocket during the pandemic and revenues plummet during the economic shutdown.

Republicans are resisting what they call a “bail out” for state governments. GOP senators heard privately this week from Hank Paulson, the former Treasury Secretary, about strategies used during the 2008 financial crisis.