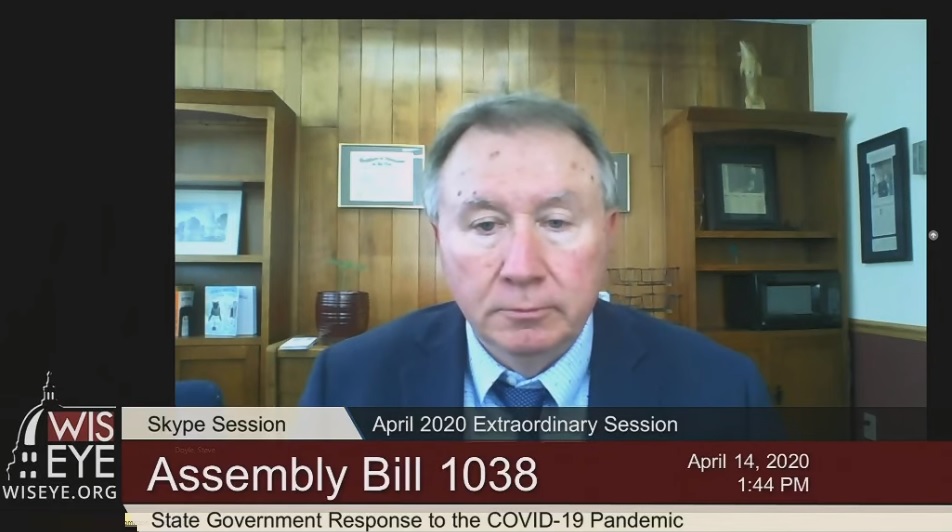 It was a rarity in Madison. Sure, a first-ever virtual vote, which hasn’t happened in the state’s 172-year history.

But, how long has there been the ability to virtual vote?

The rarity was that lawmakers made a near unanimous vote on Tuesday.

“You don’t see a lot of stuff passed unanimously, or close to unanimously,” Onalaska state Rep. Steve Doyle said Tuesday on La Crosse Talk PM. “It speaks volumes that we were actually able to bridge that divide and finally do something that we all agreed on or almost all of us agreed on.

All it took was getting weeks into a global pandemic with the state shut down, before Wisconsin started to vote on plans to utilize billions in federal funding over COVID-19.

“That was getting frustrating,” Doyle admitted. “It took a while. I mean, at least it finally came together.

“So we’re getting it done but nothing happens fast in government these days, even when there’s a crisis, and that gets to be kind of frustrating.”

The virus relief bill passed on a 97-2 vote by the Assembly. Doyle, who voted virtually from his law office in Onalaska, said it should help multiple facets of industry, the unemployed, as well as health care workers.

“So, if you are an EMS worker, for example, if you contract coronavirus, we don’t make you prove how you got it or that you got it through work,” Doyle said Tuesday on La Crosse Talk PM. “We’re simply saying, ‘You get it, you’re eligible for various benefits.'”

According to Madison state Rep. Chris Taylor, that wasn’t always the case. In fact, before the vote she said Republicans added provisions into the bill, giving lawmakers just 10 minutes to review them.

“It seems (Republicans) are changing the definition of “first responder” to include those providing medical treatment of COVID-19, but they are taking out “medical or other emergency services,” so it seems certain front line workers will be ineligible,” Taylor wrote. “There is also an additional specific requirement that these workers must have been exposed to COVID-19 while working in order to be eligible, which would be almost impossible for them to prove.”

Doyle’s comments seem to show at least one of those provisions were removed last minute. He also said, a lot of Democratic proposals were removed, as Taylor noted below.

“Democrats have put forth three amendments to the GOP COVID-19 legislation:
1. Our first amendment applied the provisions of the COVID-19 bill to other emergencies in the future so we don’t have to do this all again next time there is an outbreak or other crisis.
2. Our second amendment provided help for childcare providers serving front line workers, insurance coverage for COVID-19 treatment, emergency funding for the UW System, and loans for small businesses.
3. Our third amendment moves the fall election to be a mostly mail-in election.
Republicans voted them all down on a party-line vote.”

The bill does ensure Wisconsin can utilize $2.3 billion under the federal stimulus package. The Legislature’s budget committee would be allowed to allocate up to $75 million in funding during the public health emergency and up to 90 days after it ends, according to The AP.

Wednesday, the Senate should vote on the legislation and hopefully it’ll get on Gov. Tony Evers’ desk for signature Thursday.

Doyle said it should be the first of multiple phases. He added that part of this will be to “get people used to what is probably going to be the new normal. That things just don’t work quite the same as they used to.”

One part of the bill removes the one-week waiting period for those seeking unemployment benefits. It also allows anyone to receive unemployment between March and Feb. 7, 2021 — so those who were unemployed back in early March should be able to go back and apply for benefits through that week.

As for many big picture specifics, Doyle admitted he was leaving that to the experts in those fields.

“Can I tell you exactly what the components are going to be?” he asked. “No, but people who are smarter and more experienced than I am, are going to get together and figure out the components, whether it’s manufacturing, agriculture, construction, retail, whatever.

“We think that there’s more that’s going to need to be done over the next few weeks, perhaps few months, so we’d like to come back and pick up where we left off,” Doyle added.