Experts say virus could kill up to 240,000 Americans 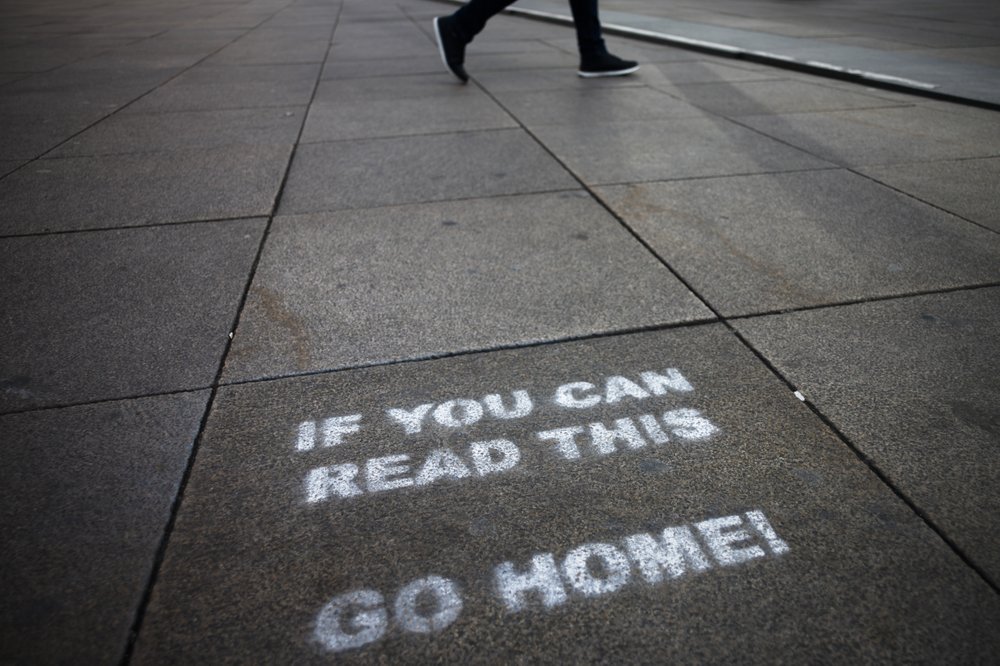 FILE - In this March 30, 2020, file photo, a message demanding the people to go home is sprayed on the ground of Alexanderplatz square in Berlin, Germany. Labs were quick to ramp up their testing capacity and now experts say up to 500,000 tests can be conducted in Germany per week. That quick work, coupled with the country's large number of intensive care unit beds and its early implementation of social distancing measures, could be behind Germany's relatively low death toll. (AP Photo/Markus Schreiber, File)

NEW YORK (AP) — As the number of coronavirus deaths continues to surge in the U.S., officials are warning the disease could kill between 100,000 and 240,000 Americans, even if people continue to stay home and limit their contact with others.

Experts made the prediction at a Tuesday media briefing with President Donald Trump. But they said they hope the figure won’t soar that high if everyone does their part to prevent the virus from spreading.

“I want every American to be prepared for the hard days that lie ahead,” said Trump, who also extended social distancing guidelines until April 30. “We’re going to go through a very tough two weeks.”

In Italy, where more than 12,000 people have died from the virus, the most of any nation, officials reported that the infection rate appears to be leveling off and new cases could start declining, but that the crisis is far from over. Spain, meanwhile, was struggling to fend off the collapse of its hospital system. China, where the outbreak began, on Wednesday reported just 36 new COVID-19 cases.

In Cuba, authorities canceled the island’s iconic May Day parade, which often draws hundreds of thousands of people to the Plaza of the Revolution in Havana. The country also tightened travel restrictions that already bar tourists.

Worldwide, more than 850,000 people have been infected and over 42,000 have died, according to a tally kept by Johns Hopkins University. Italy and Spain accounted for half of all the deaths.

Some people have chosen to ignore social distancing guidelines. In Louisiana, buses and cars filled a church parking lot on Tuesday evening as worshippers flocked to hear a pastor who is facing misdemeanor charges for holding services despite a ban on gatherings.

A few protesters also gathered at the Life Tabernacle Church, including one who held up a sign that read: “God don’t like stupid.”

The projections presented at the White House media briefing suggested that, if no social distancing measures had been put in place across the country, between 1.5 million and 2.2 million people would have died.

Dr. Anthony Fauci, who is helping to lead the U.S. effort, said, “As sobering a number as that is, we should be prepared for it.”

New York was the nation’s deadliest hot spot, with about 1,550 deaths statewide. Most of those were in New York City, which braced for things to get much worse in the coming weeks. Refrigerated morgue trucks were parked on the streets to collect the dead.

The indoor tennis center that is the site of the U.S. Open tournament is being turned into a hospital as well.

“I’ve practiced emergency medicine for a long time, and I’m seeing things that I never could have imagined in terms of the things this virus can do to all ages, including people who were previously healthy,” said Dr. Eric Wei of the city’s hospital agency.

Meanwhile, two ships carrying passengers and crew from an ill-fated South American cruise are urging Florida officials to let them dock. Dozens aboard have reported flu-like symptoms, and four people have died. Two of the deaths have been blamed on COVID-19, and nine people have tested positive.

In Italy, there was a glimmer of hope. Dr. Silvio Brusaferro, the head of Italy’s institutes of health, said that three weeks into a nationwide lockdown, the country was seeing the rate of new infections level off.

“The curve suggests we are at the plateau,” he said. But “arriving at the plateau doesn’t mean we have conquered the peak and we’re done. It means now we should start to see the decline if we continue to place maximum attention on what we do every day.”

With the country’s health care system buckling under the pressure, a field hospital, built in just 10 days, was unveiled at the Milan fairgrounds.

“We made a promise and we kept it,” said the head of the project, former civil protection chief Guido Bertolaso, who ended up catching the virus while on the job and had to work from his hospital bed.

In Russia, lawmakers approved harsher punishments, including prison sentences of several years, for violating quarantine rules and spreading misinformation. The chief doctor at Moscow’s top hospital for coronavirus patients said he tested positive, a week after shaking hands with Putin.

Spain reported more than 840 new deaths, pushing the toll above 8,000 and forcing Madrid to open a second temporary morgue after an ice rink pressed into service last week became overwhelmed.

Dozens of hotels across Spain have been turned into recovery rooms, and authorities are building field hospitals in sports centers, libraries and exhibition halls.

In Israel, the Defense Ministry said it has converted a missile-production facility into an assembly line for ventilators.

For most people, the coronavirus causes mild or moderate symptoms, such as fever and cough. But for others, especially older adults and people with existing health problems, it can cause severe symptoms like pneumonia.