Evers: ‘Connect the dots’ to see if GOP leaders are sexist 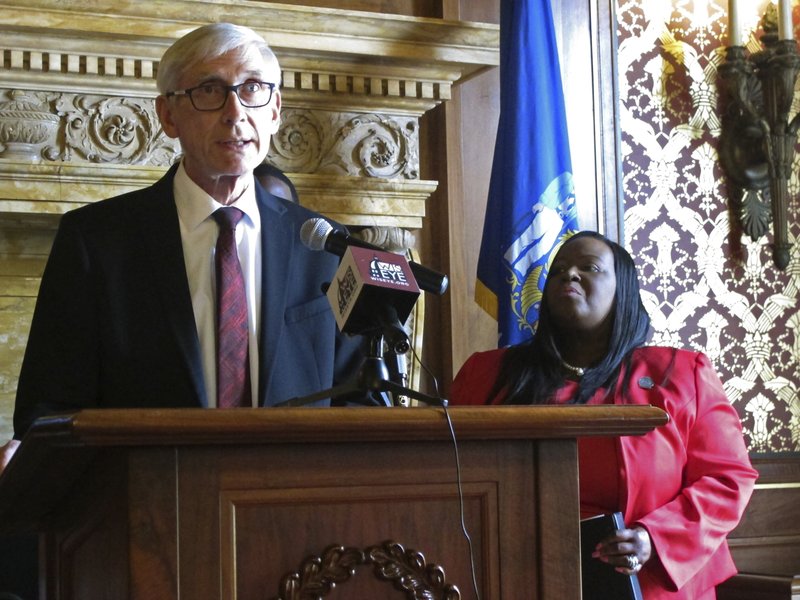 MADISON, Wis. (AP) — Democratic Gov. Tony Evers had this to say on whether Republican legislative leaders are sexist: “You connect the dots.”

Evers released a statement Monday, after earlier refusing to answer questions, about whether he agreed with his spokeswoman’s claims that Republicans won’t negotiate with the governor’s chief of staff because she is a woman.

“Only Robin Vos and Scott Fitzgerald can say why they won’t work with the women who are leading my office,” Evers said of the Assembly speaker and Senate majority leader. “I have asked Republicans to work with my staff the way they worked with the former governor’s staff. They know how to work with my staff and are choosing not to. So, this is clearly a departure from past practice. You connect the dots.”

Walker and fellow Republicans who controlled the Legislature met frequently to negotiate, but even they couldn’t easily find agreement on major issues like road funding. But the relationship between the Democrat Evers and GOP lawmakers is much more strained.

On Saturday, Evers spokeswoman Melissa Baldauff said Republican legislative leaders won’t negotiate with the governor’s chief of staff Maggie Gau because she is a woman. Fitzgerald called the charge “completely asinine.” Vos, in calling Evers’ staff “clueless,” noted that his chief of staff and other office leaders are all women.

“This entire argument is silly,” Vos said in one message. “An elected Governor should be meeting with legislative leaders regularly. Every state has partisan differences but it seems only in (Wisconsin) does the elected (governor) delegate meeting with other elected leaders to staff.”

Evers appeared Monday at a news conference in support of a Democratic bill for automatic voter registration. Republicans removed an Evers proposal to do that in his state budget and now Democrats are reviving the issue as a separate bill.

Evers refused to address questions about the sexism claim or whether he would veto four anti-abortion bills passed by the Assembly last week.

Fitzgerald reacted to Evers initially refusing to comment, but he had no immediate comment on the governor’s later statement.

“If not even the governor’s spokesperson can be trusted to speak for the governor, how can he expect us to work with anyone from his staff?” Fitzgerald said in his initial comment.

The conflict between Republicans and Evers began before he took office, when Republicans called a lame-duck session in December to weaken his powers and make it more difficult to undo GOP policies enacted under eight years of Walker.

The state Supreme Court heard arguments last week in one lawsuit challenging the constitutionality of the session. A lower court judge invalidated the laws, but an appeals court reinstated them pending the Supreme Court ruling. Other laws are not in effect because of rulings in separate lawsuits challenging the lame-duck session.

The dust-up over who should be negotiating with Republican lawmakers only further stresses their relationship at a time when the Legislature is reworking Evers’ budget as they prepare to pass their own version of the two-year spending plan.

Evers, who has powerful line-item veto authority, has held out the possibility of vetoing the entire budget. Vos, last week, noted that hasn’t happened since 1931 as he continued to bemoan Evers’ willingness to work with Republicans.

Evers has been sticking by his plans to expand Medicaid, increase funding for K-12 schools, and provide a long-term funding solution for roads that includes a gas tax increase.

His education funding plan is up for votes Thursday in the budget committee. Evers said he would “definitely” meet with Vos and Fitzgerald this week, and he wanted to talk about the voting rights bill.

Vos said in a statement that it’s easy to register to vote now and the bill isn’t needed. But back in 2012, Vos voiced general support for the idea.