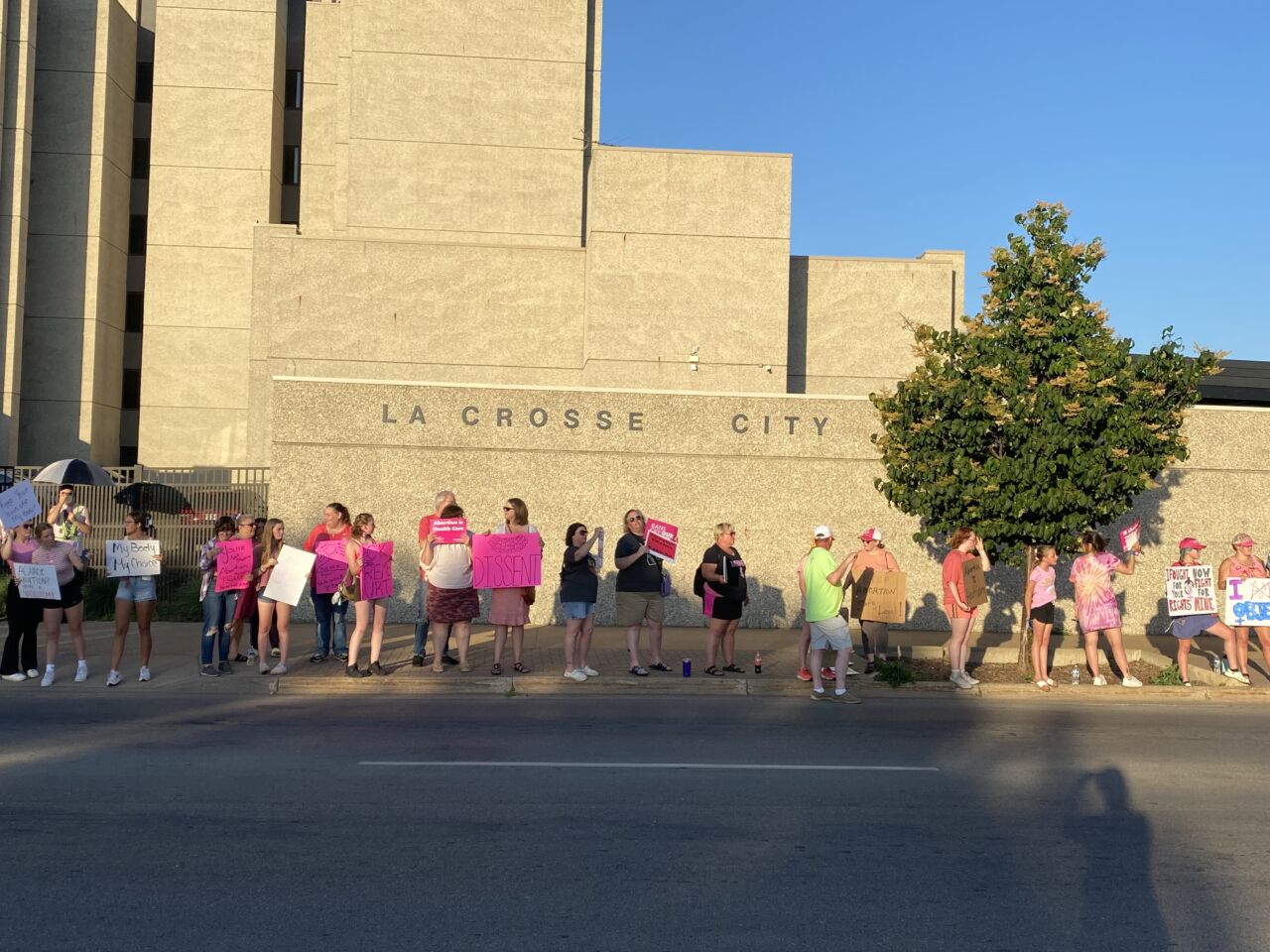 Around 450 people lined up outside La Crosse’s city hall Friday night to protest the overturning of Roe v. Wade, after the U.S. Supreme Court announced its decision that morning.

The crowd stood along 4th Street holding signs and yelling chants, while numerous cars drove by, blaring their horns and cheering. Several women in the passenger seat reached over and honked while their significant others drove.

With all the support shown by passers by, one protester, Cooper Simms, said that it was clear “the majority is not for what the Supreme Court chose to do with their overruling of Roe v. Wade.”

Jenna Helminski Juve said she felt like she should go to the protest, not as a political statement, but to support human rights.

“One of the things I truly hate is that women cannot talk about abortion,” Helminski Juve said. “We are not talking about it amongst ourselves, let alone anyone in the public. I’m just hopeful we can make it back someday, where things can be better. Wisconsin needs to move forward, not backward.”

The rally was coordinated by Planned Parenthood Advocates of Wisconsin. Joella Striebel, who works as the public affairs regional coordinator for the organization, explained that the rally was held to bring a sense of community and support to those who oppose the decision.

“We wanted people to be able to come together in community, and demonstrate that this is the will of the people,” Striebel said. “We know that the majority of Wisconsinites support access to safe, legal abortion and we’ve seen that reflected in the crowd that turned out tonight.”

Planned Parenthood of Wisconsin paused their abortion services after a Wisconsin’s 1849 trigger law rendered abortion illegal immediately after the decision was announced. Clinics in the state announced last week that their last day to provide the service would be on June 25 in anticipation for the court’s decision.

Planned Parenthood employees spent the day calling women who had appointments — some scheduled just hours after the decision was announced — telling them they were unable to be seen, and providing them with resources in Minneapolis and Chicago, where abortion access is protected.

“We are exploring a number of legal strategies and waiting to see what the courts in Wisconsin say about whether or not the ban is enforceable and what the legal landscape looks like,” Striebel explained. “Our hope is that we will be able to resume those services as soon as possible.”

Striebel stressed that Planned Parenthood is continuing to provide other reproductive health services, such as providing contraceptives and STD testing.

“I want to emphasize that the doors of Planned Parenthood of Wisconsin are still open and we are still here to continue to provide healthcare services to the people of Wisconsin,” Striebel said.