Scaffolds are down, but there's more work to be done on La Crosse cathedral 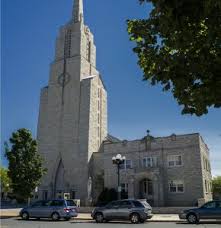 The St. Joseph the Workman Cathedral in La Crosse is back out in the open, after being shrouded in scaffolding for more than a year.

Replacement of heavy stones on the outer wall made the scaffolds necessary.  But the $6 million restoration isn’t done yet.  Monsignor Richard Gilles says the church which opened in 1962 had serious problems earlier than expected.

“We’re 60 years into it, but there’s been problems developing well into like the 20, 30 year mark which isn’t that long for a brand new building,” saus Gilles. The scaffolds helped keep people from getting close to the church as old stones would fall to the ground.

The project was supposed to be finished back in December.  However, Gilles likes how the outside of the cathedral looks after the replacement of many large pieces of stone.

Gilles tells us a celebration of the cathedral makeover is being planned for this September.