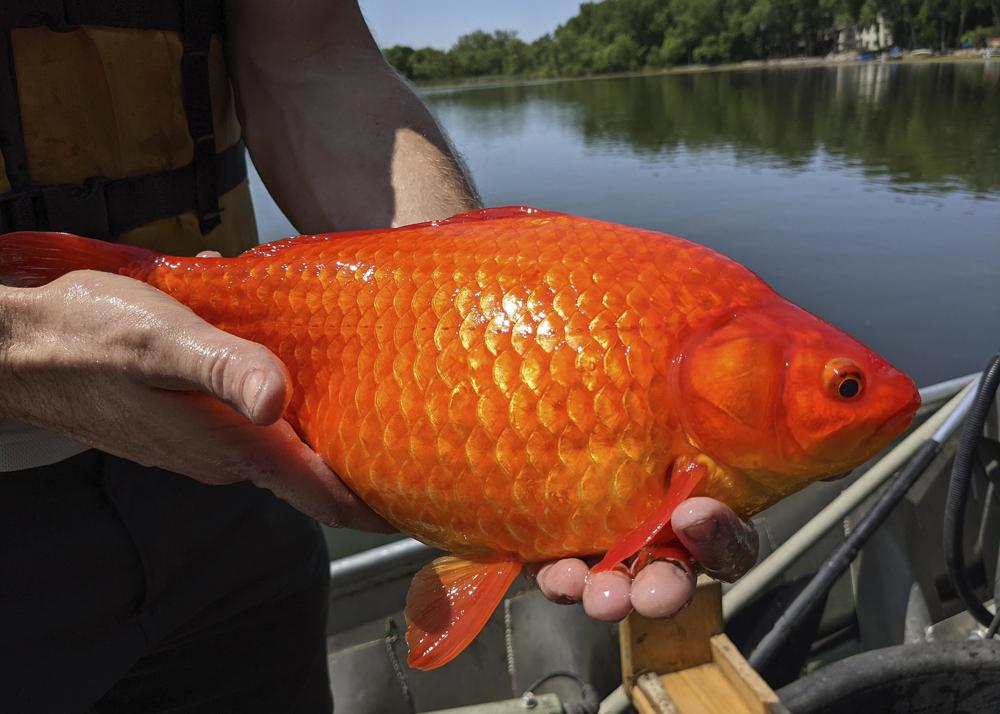 In this image provided by the City of Burnsville, Minn., a large goldfish caught in Keller Lake during a water quality survey is held, Friday, July 2, 2021. Officials in Minnesota say they're finding more giant goldfish in waterways, prompting a plea to citizens to stop illegally dumping their unwanted fish into ponds and lakes. The goldfish, which can grow to the size of a football, compete with native species for food and increase algae in lakes. (City of Burnsville via AP)

The goldfish, which can grow to the size of a football, compete with native species for food and increase algae in lakes. Officials in the Twin Cities suburb of Burnsville found 10 fish in Keller Lake earlier this month while doing a water quality survey.

On Monday, 18 additional fish were found. Some were 18 inches (46 centimeters) long and weighed about 4 pounds (1.8 kilograms).

“Please don’t release your pet goldfish into ponds and lakes!” the city said in a tweet. “They grow bigger than you think and contribute to poor water quality by mucking up the bottom sediments and uprooting plants.”

Burnsville officials have worked with Carp Solutions, a startup company that develops new technologies for controlling carp, a larger cousin of goldfish.

The company uses boat electrofishing to capture the fish, said founder Przemek Bajer. Wires electrify the water and the stunned fish float to the surface to be netted and measured.

In Burnsville, the fish were ultimately killed.

Goldfish and carp can survive in frozen lakes and those with very poor water quality because they can live without oxygen for long periods. They also show up in healthier lakes.

“I think that they are getting more and more common,” Bajer said.