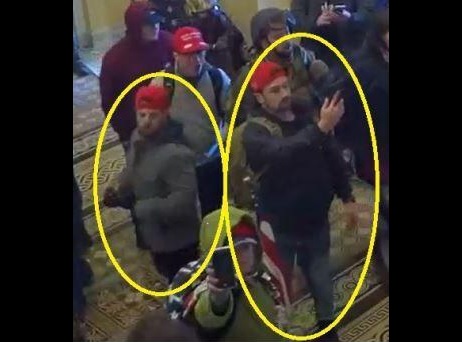 A La Crosse County man was in court Monday facing charges from being inside the U.S. Capitol during the Jan. 6 riot.

According to the complaint, investigators linked Markofski’s phone inside the Capitol or in restricted areas around the Capitol between 2:15-3:41 p.m. through his email address tied to the device.

Markofski and Brandon Nelson of Dane County, went to D.C. on Jan. 5 to hear then-President Donald Trump speak the next day. After the speech, like many others, the two marched to the Capitol.

A tipster initially alerted investigators to Nelson being in the Capitol, according to the complaint. The FBI interviewed him Jan. 18, when he admitted being inside, along with Markofski.

While Nelson told investigators they headed up the Capitol stairs and were guided in by police and were there about 40 minutes, Markofski said they weren’t ‘guided.’

Markofski’s told investigators a Capitol Officer said, “I can’t make you guys leave. However, for your safety, you should leave.”

Markofski joined the Guard in 2019 and is currently a private first-class in the 1st Battalion, 128th Infantry, Guard spokesman Joe Trovato told the AP.

U.S. Magistrate Judge Stephen Crocker released them Monday, pending a virtual hearing May 10 and barred them from entering the Washington, D.C.

More than 400 have been charged in the U.S. Capitol storming in hopes of blocking certification of Joe Biden’s presidential victory. Five people died and dozens of officers were injured in the riot.

Nelson and Markofski are at least the fourth and fifth Wisconsin residents charged.