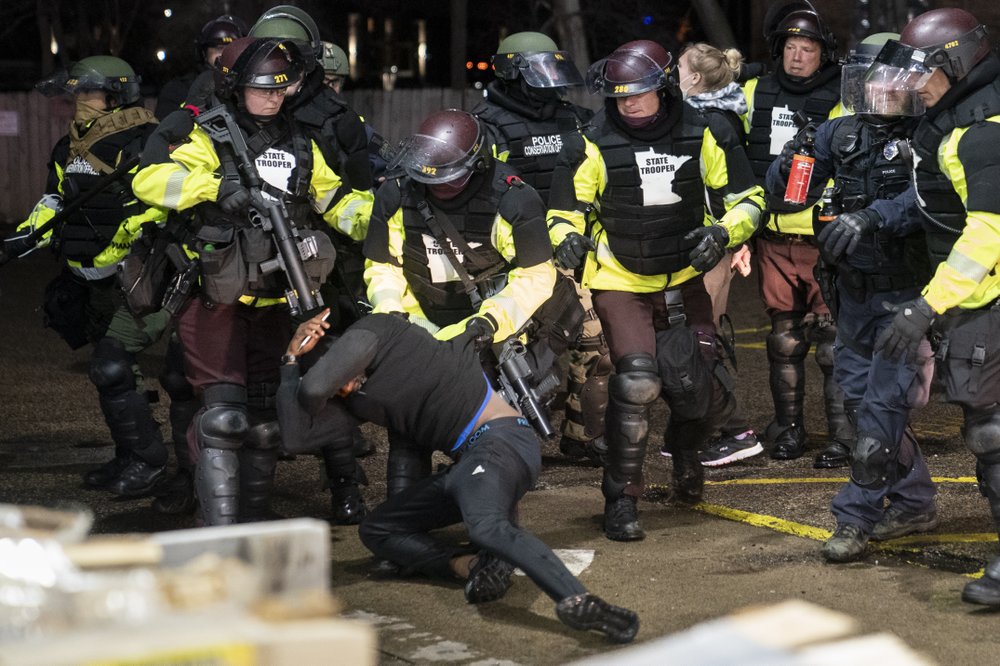 BROOKLYN CENTER, Minn. (AP) — As protests intensified in the Minneapolis suburb where a police officer fatally shot Daunte Wright, a group of Black men joined the crowd intent on keeping the peace and preventing protests from escalating into violence.

Hundreds of people have gathered outside the heavily guarded Brooklyn Center police station every night since Sunday, when former Officer Kim Potter, who is white, shot the 20-year-old Black motorist during a traffic stop. Despite the mayor’s calls for law enforcement and protesters to scale back their tactics, the nights have often ended in objects hurled, tear gas and arrests.

The Black men at the edge of the crowd wear yellow patches on protective vests that identify them as members of the Minnesota Freedom Fighters, a group formed to provide security in Minneapolis’ north side neighborhoods during unrest following the death of George Floyd last year. They are not shy about casting a forceful image — the group’s Facebook page features members posing with assault-style weapons and describes itself as an “elite security unit” — but on Friday the Freedom Fighters didn’t appear to be armed and said they intended only to encourage peaceful protesting.

As several people began to rattle a fence protecting the Brooklyn Center police department, the Freedom Fighters communicated to each other over walkie-talkies. They declined to say how many are in their group.

On recent nights, the Freedom Fighters have moved through the crowd in formation, wearing body armor and dark clothing, weaving past umbrella-wielding demonstrators to create separation along a double-layer perimeter security fence. Their passive tactics are intended to deescalate the tension, preventing agitators from pressing forward and provoking the law enforcement officers standing at attention with pepper-ball and less-lethal sponge grenade launchers at the ready.

“We can keep it peaceful,” said Tyrone Hartwell, a 36-year-old former U.S. Marine who belongs to the group. “There’s always somebody in the group that wants to incite something,” adding that throwing objects at the police takes the focus away from their calls for justice and seeps energy from the movement.