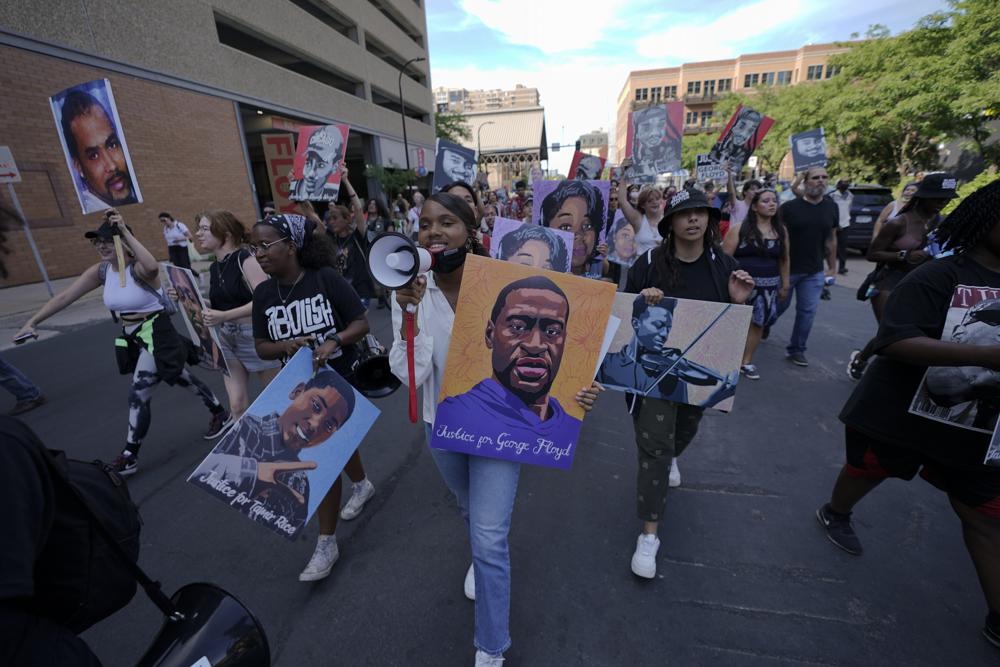 ST. PAUL, Minn. (AP) — Among the scathing findings of an investigation launched after the police killing of George Floyd is that Minneapolis police used covert or bogus social media accounts to monitor Black individuals and groups despite having no clear public safety rationale for doing so.

The report released Wednesday by the Minnesota Department of Human Rights echoes numerous past revelations that the FBI and other law enforcement agencies have — sometimes illegally — secretly surveilled prominent people and communities of color even though they weren’t involved in any criminal activity.

Overall, the two-year investigation found that the Minneapolis Police Department engaged in a pattern of race discrimination for at least a decade, including stopping and arresting Black people at a higher rate than white people, more frequent use of force on people of color and a department culture that tolerated racist language.
Regarding social media, it spotlighted departmental abuses turned up in a review spanning activity between 2010 and 2020.

Officers used “covert, or fake” accounts to seek and gain access to the online profiles of Black individuals including an unnamed City Council member and a state elected official, the report said, as well as groups such as the Minneapolis NAACP and Urban League. The activity included friend requests, comments on posts, private messages and participation in discussions.

“When doing so, officers posed as like-minded individuals and claimed, for example, that they met the targeted person at a prior demonstration or protest,” the report said.

The report acknowledged that law enforcement can have legitimate reasons for tracking social media “if a clear investigative purpose to advance public safety exists,” and if clear procedures and accountability mechanisms are in place.

The report doesn’t include enough details to support criminal charges against any specific officers or lawsuits by individuals who were targeted, but some observers say it seems likely the Human Rights Department has other information from the investigation that a lawyer could use to try to build a case.

Spokesman Taylor Putz said the agency was unable to release any information beyond what’s in the report because the case is still considered open while it works with the city to address the problems it identified.

Via Twitter, the Minneapolis NAACP expressed dismay over having spent years working with police to try to address problems “only for MPD to continue to stall efforts and turn around and surveil us.”

Andrew Ferguson, a law professor and expert on police technology and surveillance at American University, said that of the many examples of misconduct outlined in the report, “the abuse of social media raises a red flag for all police departments.”

“What is happening in Minnesota is happening in many jurisdictions, because there are few rules in place and no accountability,” Ferguson said. “Police rummage through social media without limits, turning our digital lives into sources of surveillance. It might feel less violent than some of the other police misconduct, but it is still violative and wrong.”

For Diala Shamas, an attorney with the Center for Constitutional Rights, the revelations are echoes of a covert FBI program from the 1950s to early ’70s, known as Cointelpro, that illegally conducted surveillance and sabotage against civil rights groups and other organizations, sowing paranoia, distrust and violence. Targets included the Rev. Martin Luther King Jr., the Black Panthers, Malcolm X and many others.

The police actions in Minneapolis, Shamas said, amount to “Cointelpro tactics with a modern twist.”

Law enforcement agencies across the country have been using social media surveillance for years, however. A 2016 survey by the Urban Institute and the International Association of Chiefs of Police found that 70% of departments mined social networks during investigations.

But the rules governing how they do so are often opaque, vague or not a matter of public record.

In a study last year of every U.S. jurisdiction with at least 100,000 people, researchers at the Brennan Center for Justice found just 35 police departments had publicly available policies that in some way addressed the use of social media for collecting information. Of those, 15 had language setting some limits on undercover or covert online activity. But several were vague or set a low bar for authorization, simply requiring supervisor approval.

“I would say that very few if any of the policies really gave detailed, robust limitations on the use of undercover accounts,” said Rachel Levinson-Waldman, deputy director of the Brennan Center’s Liberty and National Security Program.

Police misuse of social media has been uncovered in departments beyond Minneapolis, she noted.

In Tennessee, a lawsuit by the state chapter of the ACLU exposed the use of covert Facebook accounts by Memphis officers to target activists of color and community justice advocates. A federal judge determined that violated a longstanding consent decree barring the department from infringing on activities protected by the First Amendment.

And in California, the Brennan Center obtained records showing that third-party social media monitoring companies had pitched their services to the Los Angeles Police Department, including the ability to create furtive accounts for officers. While the city requires approval for some undercover online activity, Levinson-Waldman said, there are exceptions such as for threat assessments that allow officers to sidestep real oversight or accountability.

Shamas, of the Center for Constitutional Rights, said covert surveillance like that practiced in Minneapolis and elsewhere can have serious and chilling effects.

“The idea that you don’t know that the person you’re liaising with is undercover or an informant means you’re going to be less likely to explore new ideas for strategies and campaigns,” she said, “all the things that are important for a democratic society.”