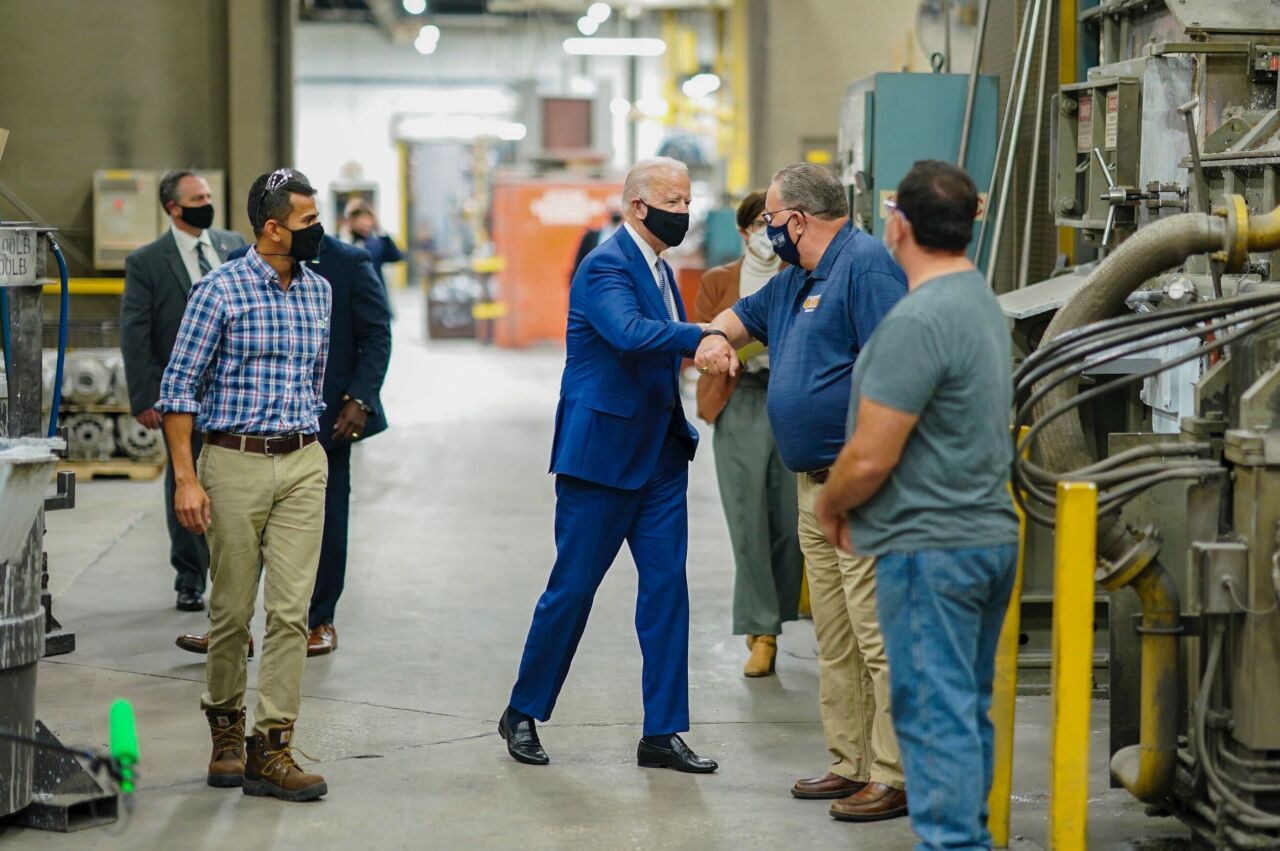 Greeting workers with elbow bumps, Joe Biden made his second trip in the past few weeks to Wisconsin on Monday, visiting an aluminum foundry.

As a precaution to COVID-19, Biden spoke to a limited number of attendees and reporters from the county that backed President Barack Obama, before swinging to Donald Trump in 2016 over Hillary Clinton.

“I know many of you were frustrated, you’re angry,” Biden said said during the visit to Wisconsin Aluminum Foundry. “You believed you weren’t being seen, respected or heard. I get it. It has to change. And I promise you this: It will change with me. You will be seen, heard and respected by me.”

Trump defeated Hillary Clinton in 2016 by more than 20 points. In 2012, Mitt Romney lost to Obama by three points.

Upon leaving, Biden’s motorcade stopped outside the foundry, as he greeted people waiting outside to see him.

Talking to a couple of kids wearing Green Bay Packers shirts, Biden said to them, “I gotta tell you one story about the Packers.”

He then talked about his Norbertine priests whose Catholic order originated at St. Norbert College in De Pere, Wis.

“I didn’t go there, but they were the Norbertine priests who taught us,” Biden said. “When we were in school, what happened is in this Catholic school I went to, the priests, we had a very tough curriculum, they were very tough … it’s a lot of work.

“But, what they would do is, when the Green Bay Packers played on Sunday, if they won, in homeroom, we showed up and we got the last period off. That was a way to bribe an entire group of young men, a lot of them Eagles fans and Baltimore Colts fans, to be Green Bay fans. So I just wanted you to know.”

While visiting the foundry, Biden spent much of his speech, calling out Trump’s tax cuts and trade policies, which he says have hurt manufacturers and the working class.

“(Trump) sees the world from Park Avenue,” Biden said. “I see it from where I grew up in a town like this, Scranton, Pennsylvania. A hard-(scrabble), hard-working town, just like this and so many more across Wisconsin.”

Biden criticized Trump’s response to the virus and for continuing to hold large rallies putting people at risk.

“Trump panicked,” Biden said. “The virus was too big for him.

“I worry we’re risking becoming numb to the toll it has taken on us and our country and communities like this,” Biden continued. “We can’t let that happen. We can’t lose the ability to feel the sorrow and the loss and the anger for so many lives lost.”