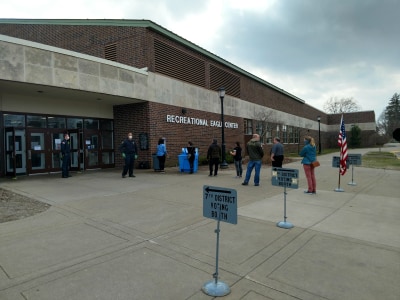 While reports across Wisconsin claimed thousands of voters were forced to congregate for hours outside of polling places Tuesday with no protective gear, that was not the case for voters in La Crosse.

The number of voters ebbed and flowed throughout the day, but Jim Jenks, chief inspector for the elections, said, for the most part, the process flowed smoothly between voters and poll workers.

There were only a few cases of voters showing up to the incorrect polling places because the city reduced the number open.

“Everyone has been very reasonable about it,” Jenks said.

Jenks said there had been lower voter turnout, especially with the three La Crosse college campuses closed because of COVID-19.

“That made a big difference, and I think there’s some uncertainty perhaps about when the news came out,” Jenks said referring to the back-and-forth decision of whether or not to postpone the election Monday. “But people have been even bringing their absentee ballots in today to make sure they get them in.”

Voter McKenna Schmidt said she followed the news closely Monday to know whether or not she would be voting in person this week.

“I double-checked to make sure it was still on just because I think it is really important to exercise your right to vote whether it be through a pandemic or not,” Schmidt said.

Polling places in the City of La Crosse had hand washing stations outside the buildings for people to use before entering. Additionally, there were hand sanitizer stations. Plexiglass separated poll workers from voters at the tables and those who worked directly with people were given masks. The pens used to mark votes were one-time-use only and sent home with voters.

Schmidt said she felt as if the poll workers took the necessary precautions in La Crosse to ensure a safe environment.

“It is important to make sure that you stay healthy, but also just as important to exercise your right to vote,” Schmidt said. Official primary results will be released Monday afternoon.