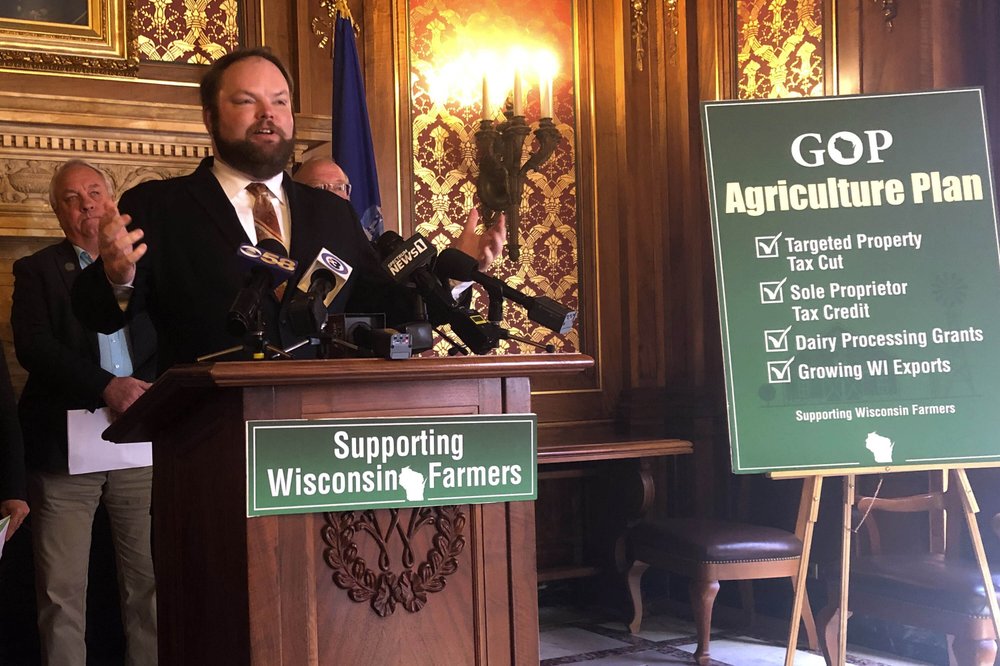 Wisconsin Assembly Rep. Tyler August speaks at a news conference attended by other GOP lawmakers to unveil a pair of tax cuts and other plans designed to help the state's struggling agriculture industry on Monday, Feb. 10, 2020, in Madison, Wis. The Capitol news conference to unveil the bills came a day before a public hearing was scheduled on the measures. (AP Photo by Scott Bauer)

MADISON, Wis. (AP) — Wisconsin farmers would receive up to a $7,500 tax break this year under a bill that’s part of a fast-moving package of proposals Assembly Republicans unveiled Monday to dovetail with Democratic Gov. Tony Evers’ special session call to help the state’s struggling agriculture industry.

It’s unclear whether the measures will have enough support to pass the Senate or be signed by Evers. The governor is reviewing the proposals and glad that lawmakers are working on efforts to help rural Wisconsin, said Evers’ spokeswoman Melissa Baldauff.

Republicans touted their package of five new bills building off of what the governor proposed as being “bigger and bolder” than the Evers plan but did not have a total cost estimate. The Evers proposals would cost $8.5 million over two years, but did not include a pair of tax breaks Republicans are seeking.

Wisconsin is home to nearly 65,000 farms and the agriculture industry contributes more than $100 billion annually to the state’s economy. But the state’s $46 billion dairy industry has been hit hard in recent years. Wisconsin has lost a third of its dairy farms since 2011, an average of two a day.

One of the newly proposed Republican tax breaks would allow farmers and other sole proprietors to deduct the cost of health insurance from their income taxes. That would cost roughly $9 million a year, according to its sponsor Rep. Amy Loudenbeck. She did not know how many farmers would qualify.

The other new tax credit would be available for three years to farmers who have at least $35,000 a year in cash farm income. The credit, up to $7,500, would be equal to about 66% of the taxes levied on buildings and other improvements that are used exclusively for farming. There was no estimate on how many people would qualify.

Bill sponsor Rep. Travis Tranel, whose family has a dairy farm in Cuba City, said the goal was to quickly get the money into the hands of farmers so they could use it to defray the costs of fuel, animal feed, fertilizer and other costs. Tranel said he didn’t know how quickly the tax credit would be provided to farmers who qualify this year, but the next two years it would be a refundable credit to be claimed when filing for income taxes.

“Our farms are feeling pain and they need help right now,” he said. The tax credit would end after three years, with the hope the agriculture economy will have rebounded by then, Tranel said.

Evers wanted to spend $1 million effort to increase dairy exports. Assembly Republicans said they planned to spend $5 million on that effort. They also planned to hire one person to coordinate work between the state agriculture department and economic development agency to boost dairy and agriculture exports. Evers called for hiring 20 county-based specialists to work with farmers.

Another Republican bill requires the University of Wisconsin-Madison to conduct a research study on developing a science and technology program specific to agriculture. Another GOP proposal requires the university’s Board of Regents to conduct a study into the UW System’s agriculture programs to evaluate what is working well and where more can be done.

The bills have to pass both the Senate and Assembly and be signed by Evers before taking effect. A public hearing and vote was scheduled for Tuesday before the Assembly’s Agriculture Committee.

There isn’t much time left for the Legislature to act. The Assembly only plans to convene three more days this month before quitting work for the session. The Senate plans to meet for a final day in March. Senate Republican Majority Leader Scott Fitzgerald has been open to taking up ag-specific bills, but has faced opposition from some of the most conservative senators who are reluctant to spend much money. Senators planned to discuss all of the bills in a closed-door caucus on Tuesday, Fitzgerald’s spokesman Alec Zimmerman.

Fitzgerald has also said there will be a push in the Senate to cut income and property taxes. Rep. Tyler August said he hoped the Assembly plan could be considered independently of any other tax cut the Legislature may pass.