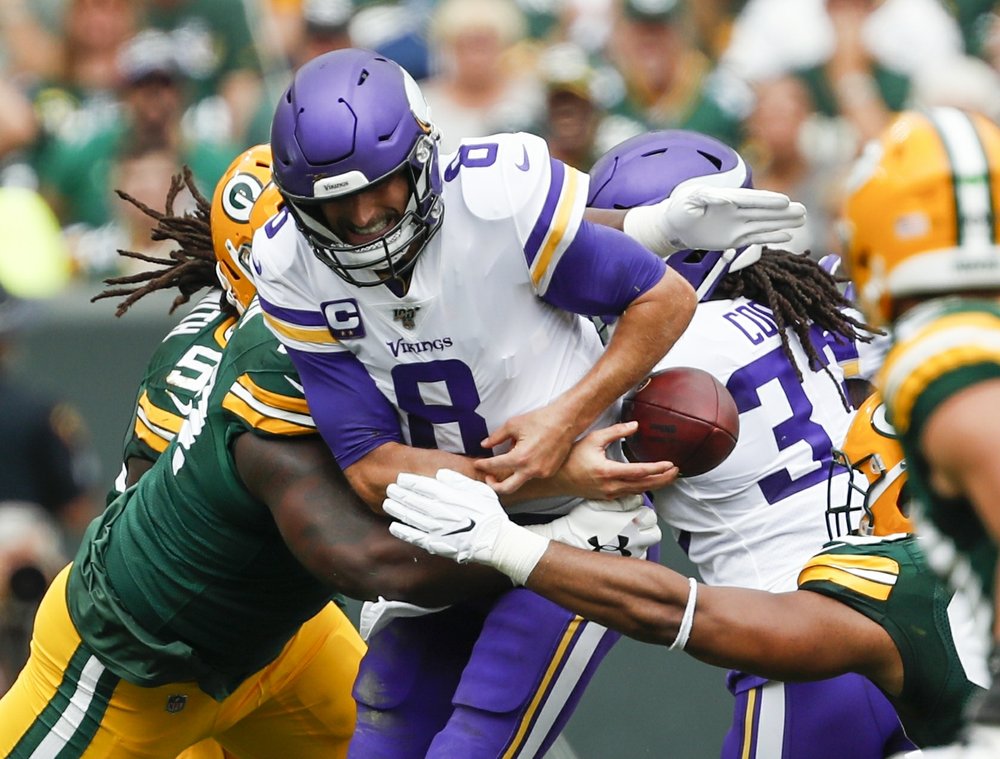 Minnesota Vikings' Kirk Cousins fumbles as he is hit during the first half of an NFL football game against the Green Bay Packers Sunday, Sept. 15, 2019, in Green Bay, Wis. The Packers recovered the fumble. (AP Photo/Matt Ludtke)

MINNEAPOLIS (AP) — During his nine-year hiatus from the NFL sideline, Jon Gruden evaluated players like he was still a coach, drawing particular attention as an analyst for ESPN for his one-on-one film breakdowns with quarterback prospects entering the draft.

Kirk Cousins was one of those pupils. Though only a fourth-round pick by Washington in 2012, the eighth player selected at his position that spring, Cousins made a clear impression on Gruden with his attention to detail and ability to communicate. Gruden even remarked at the end of that episode that perhaps he’d get back in the game to coach him.

Well, this week, Gruden and the Oakland Raiders have been scheming against Cousins, who will try to bounce back for the Minnesota Vikings on Sunday from one of the worst performances as a pro.

“He works hard at football. He’s had a lot of production,” said Gruden, who took over as coach of the Raiders last season. “Hopefully we can find a way to slow him down and win a football game.”

That’s what Green Bay did last weekend, when Cousins posted the second-worst completion percentage of his career and committed three turnovers in a 21-16 defeat. The comeback bid was waylaid by a first-and-goal interception in the end zone, an off-balance throw he said afterward he should’ve sent to the seats. Vikings coach Mike Zimmer expressed anew the team’s confidence in Cousins, who’s in the second season of a three-year, $84 million, fully guaranteed contract.

“You’ve got to play well to earn peoples’ confidence, so if he’s saying that, it’s because he’s seen practice reps, he’s seen game reps, he’s seen what we’re capable of as an offense throwing the football,” Cousins said. “So you’ve got to go out and earn it. Believe me, I’m not going to be playing quarterback here if I go out and play the way I did this past Sunday for much longer. So I understand that, and I look forward to getting out there and playing at a much higher level.”

Here are some other angles to follow on Sunday:

The Raiders (1-1) have begun this week a whopping 48-day stretch without a game at the Oakland Coliseum. After visiting the Vikings, the Raiders will travel to Indianapolis, then London for a “home” game against Chicago. After their bye week, they go back on the road to play Green Bay and Houston. The Raiders won’t play in Oakland again until Nov. 3 against Detroit.

“We’re still trying to understand how that happened, but we’re going to have to deal with it,” said Gruden, whose team went 1-7 on the road last year. “We’ve just got to showcase our mental toughness and deal with it. It’s uncommon, maybe unprecedented, maybe unrealistic that this should ever happen in pro football. I’m not excited about it, but we’ll adapt and do it the best we can.”

The Raiders will get a boost on the offensive line this week when left guard Richie Incognito makes his debut for the team. The four-time Pro Bowl pick missed the first two games, while suspended for violating the NFL personal conduct policy. He’s eager as ever to see the field for the first time since a Jan. 7, 2018, playoff game with Buffalo. Incognito did not play at all last season.

“All the negative stuff is behind me. Just eyes forward, staying positive,” he said. “Relishing the opportunity, enjoying every day in here because you don’t know how many more you’re going to have.”

Another talented veteran with a troubled past who joined the Raiders this year, linebacker Vontaze Burfict, is well-known to Zimmer, who was the defensive coordinator for Cincinnati during his first three NFL seasons. Burfict has been repeatedly fined and suspended by the league throughout his career for late, violent hits.

“He knows the defense as well as anybody, probably as well as I do. He’s very instinctive. He’s very athletic. He reads things extremely quick, and he’s a thumper,” Zimmer said. “We better make sure the officials know he has to play clean.”

Gruden wasn’t having that.

“Burfict’s played for us for two games. He hasn’t had any penalties. So I don’t know about all that,” Gruden said. “He’s had a bulls-eye on him in his career in Cincinnati, and I’m sure the referees are looking out for him. I don’t think the refs need any more help than they already have.”

The Vikings, though, were prepared to keep their head on a swivel when catching a pass in traffic.

“We’ve all lost our emotions at times, or what have you, so I think he’s learned from that stuff, and I think he’s been a pretty clean football player recently,” wide receiver Adam Thielen said.

The Raiders have made a bad habit in one-plus season under Gruden of stalling by the offense after fast starts. They’re tied for fifth in the NFL with an average of 2.83 points per drive on their first possession since the start of 2018, but that production has dropped to barely half of that over the rest of the game, with an average of 1.46 points per drive following their opening possession. Last week against Kansas City, Oakland had 10 points after two drives but didn’t score the rest of the game.

“We’ve always been able to start fast, which is good, and hopefully we can do that again this week but then maintain it and then cut out the penalties,” quarterback Derek Carr said.

The Vikings, with Dalvin Cook leading the NFL in rushing, aren’t the only team in this pass-favored league that’s content to keep the ball on the ground. Rookie Josh Jacobs, one of three first-round draft picks by the Raiders, has 184 rushing yards, fourth in the NFL.

“He runs hard, for sure,” Vikings defensive end Everson Griffen said. “He has the quickness to get the ball outside and cut it outside quick. He’s a downhill runner, and he can make the big play.”