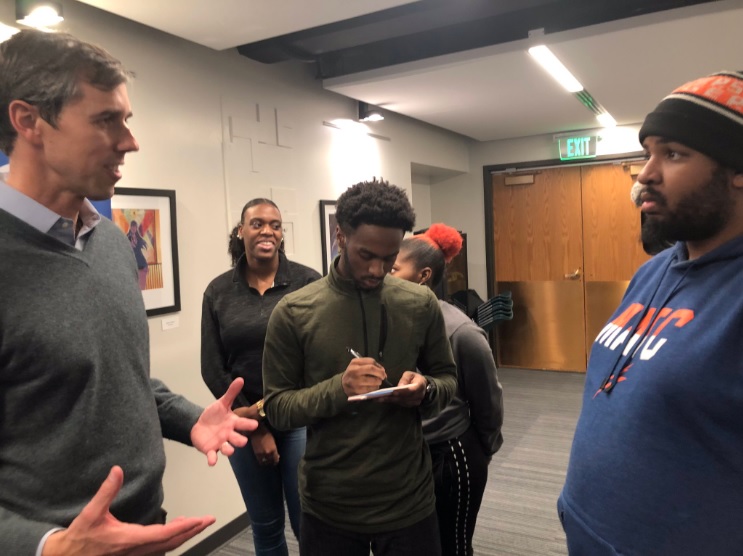 MADISON, Wis. (AP) — Beto O’Rourke said Friday during a visit to Wisconsin that before deciding whether he will join the increasingly crowded field of Democrats running for president in 2020, he wants to meet with voters in the “most honest, raw, real way possible.”

The former Texas congressman met with about 20 students at Milwaukee Area Technical College before heading to the University of Wisconsin-Madison for a similar event on campus with a group expected to exceed 200 students and faculty.

O’Rourke’s first visit to the battleground Midwest was to continue Saturday when he’s scheduled to address the United States Hispanic Leadership Institute’s national conference in Chicago.

Also Saturday, announced Democratic presidential candidate U.S. Sen. Amy Klobuchar, of neighboring Minnesota, was to launch her first campaign swing in Eau Claire, in western Wisconsin. Klobuchar was then to campaign in early voting states of Iowa and New Hampshire.

O’Rourke reiterated to reporters in Milwaukee that he hoped to make a decision about whether to get into the race “as soon as the end of this month.” He called Wisconsin an “extraordinarily important” state for Democrats to win and even said it would be “amazing” if Milwaukee were chosen to host the Democratic National Convention even though Houston in O’Rourke’s home state of Texas is also a finalist. Miami is the third city under consideration.

“It’s an extraordinary opportunity for the people of Milwaukee to tell their story,” O’Rourke said. “I think there are far too many communities that have been under-represented in the national conversation.”

President Donald Trump carried Wisconsin in 2016 by less than a percentage point, making him the first Republican presidential candidate to win the state since Ronald Reagan in 1984. Hillary Clinton was heavily criticized for not campaigning in Wisconsin during the general election and Democrats are eager to take it back.

O’Rourke said Wisconsin is “too often overlooked, the conversation does not begin until too late.” He said that is what is motivating his visits there and a similar swing that took him through Texas to New Mexico, Oklahoma, Kansas and Colorado in recent weeks.

“Before even deciding or announcing, I want to make sure to get a chance to meet people on a human-to-human level, not in a crowd, not as part of a campaign, but in the most honest, raw, real way possible,” he said. “I have so much to learn, and I want to make sure I’m learning it from anyone who wants to participate and share their stories.”