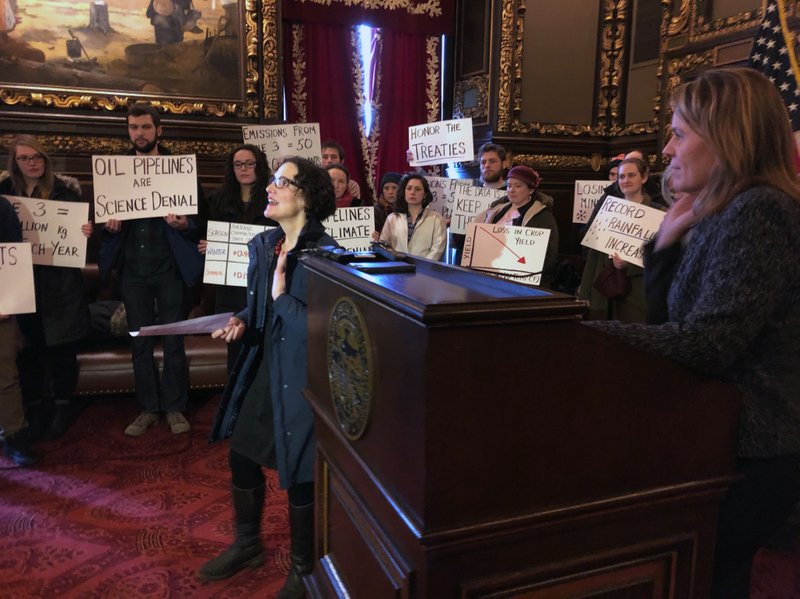 ST. PAUL, Minn. (AP) — A group of scientists on Thursday urged Gov. Tim Walz to join them in opposing Enbridge Energy’s plan to replace the stretch of its Line 3 crude oil pipeline that cuts across northern Minnesota.

Walz, who took office this month, has said he will examine all aspects of the proposed project before deciding whether to press on with a lawsuit seeking to overturn the Public Utilities Commission’s approval of it.

The lawsuit was brought by the state Commerce Department during the administration of Walz’s predecessor, fellow Democrat Mark Dayton.

More than 50 people, including scientists from the liberal activist group Science for the People, gathered in the governor’s reception room to say the science is clear that the Line 3 upgrade will aggravate climate change by facilitating further use of fossil fuels.

They called on Walz to continue with the lawsuit and for a face-to-face meeting with him and Lt. Gov. Peggy Flanagan.

“Nowhere is the call for science-based decision-making so urgent as around the need for rapid climate action,” said Christy Dolph, a University of Minnesota researcher.

The governor’s deputy chief of staff for communications and scheduling, Kristin Beckmann, welcomed the scientists, took detailed notes and said she’d convey their concerns. But she did not commit to granting the meeting.

“I would love to continue the conversation, and so we will try to work it into the governor’s schedule,” she said.

Calgary, Alberta-based Enbridge says Line 3, which was built in the 1960s, needs replacing because it is deteriorating. It says the project would restore full capacity and ensure reliable deliveries of crude to Midwestern refineries.

James Doyle, a physics professor at Macalester College, noted that Line 3 would carry Canadian tar sands oil, which takes a lot of extra energy to extract and transport.

He pointed to research showing that those oilfields are among the world’s top generators of carbon dioxide.

House Republican leader Kurt Daudt countered with a statement saying the science shows that Line 3 needs replacement and that pipelines are the safest way to transport oil.