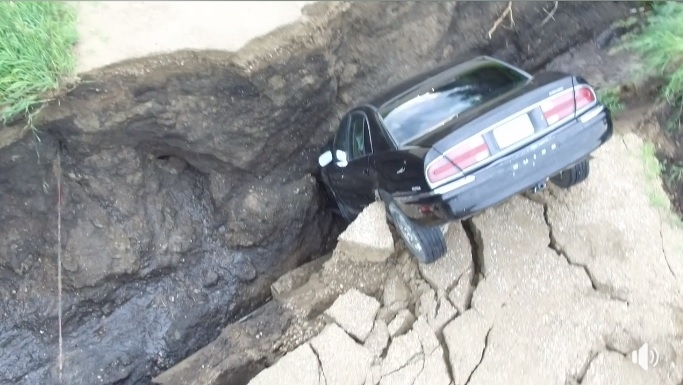 REDWOOD FALLS, Minn. (AP) — A 16-year-old in southwestern Minnesota, who drove his car into a sinkhole following heavy rains, escaped by climbing out the back window.

Another example of the power of Mother Nature! Following a significant rainfall in Renville County, this township road washed out around the culvert beneath. This 16-year-old driver was very lucky to have escaped without any injuries thanks in part to his seat bealt and air bags. Remember, always BUCKLE UP; you just never know what situation you might encounter!

The Renville County Sheriff’s Office said the sinkhole formed after a culvert under the road washed out. The teen wasn’t injured.

His grandmother, Candace Leopold, said he got his driver’s license last month and only had the car for a few weeks when the sinkhole swallowed it Tuesday. She said he was on his way to work at a farm near Redwood Falls, a community about 115 miles west of Minneapolis.

Details about damage to the car were not immediately known.