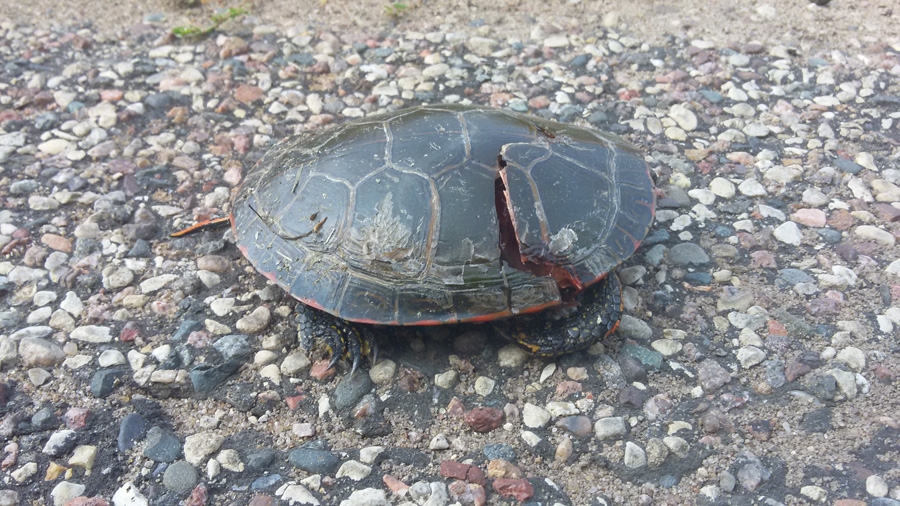 “Such reports have helped us identify problem road crossings throughout the state, and helped us document previously unknown populations of rare turtles.”

Since the project began in 2012, more than 1,300 citizens have reported nearly 3,000 turtle sightings throughout Wisconsin and have identified more than 1,300 turtle road crossing hotspots. Those hotspots include 38 sites where turtles were being run over by cars at high rates.

From May through July, female turtles cross roads to find suitable nesting areas in sunny uplands with sand, gravel, and loose soil. Turtles getting run over by cars is considered a leading cause of decline in turtle numbers in Wisconsin, especially in highly fragmented areas and areas with high traffic volumes, Badje says.

“Keeping these adult, breeding-age, females around is critical in managing sustainable turtle populations,” Badje said. “The loss of even one adult female can have a large effect on future population numbers, especially in species like the wood turtle and Blanding’s turtle, which can take from 12 to 20 years to reach reproductive age.”

For example, reports of one deadly crossing in central Wisconsin led to DNR, state transportation officials and UW-Stevens Point collaborations to install and monitor a wildlife underpass when a highway resurfaced.

That project has decreased turtle mortality at the site by 85 percent and has shown how similar projects can be undertaken to duplicate this success. Read more about this project in the article “Tunnel Vision” in the December 2017 Wisconsin Natural Resources [PDF] magazine.

In southeast Wisconsin, additional reports from Waukesha County residents spurred the county highway department to create its own road stencil and apply it to those sites where residents have reported turtle crossings, Badje says.

In addition to saving turtles, citizen reports to the website have also provided DNR information on new locations of state-threatened wood turtles and Blanding’s turtle, a protected species of “special concern” status, because its populations are low.