After closed-door meeting with Republicans, Walker confident bills will pass 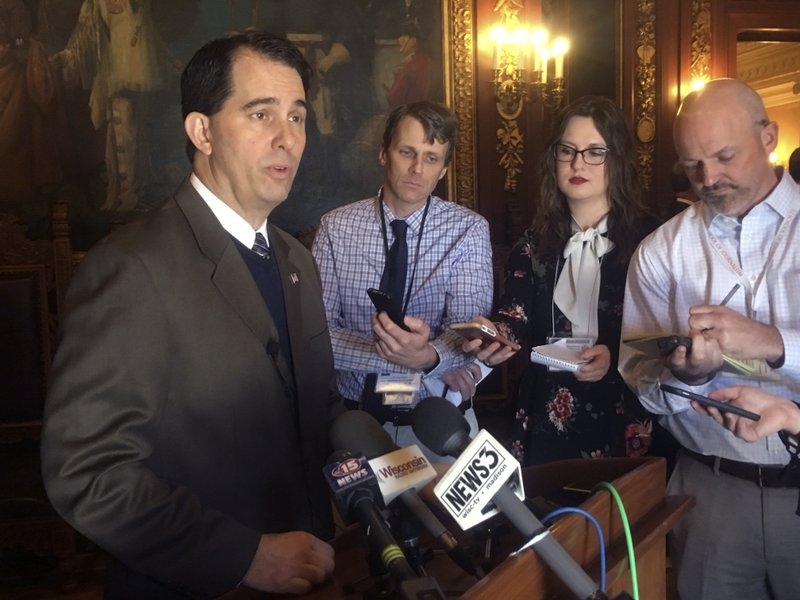 MADISON, Wis. (AP) — Gov. Scott Walker emerged from a closed-door meeting with Senate Republicans on Wednesday confident priorities such as his $100 child tax rebate, can pass, even as the more skeptical Republican leader of the Senate said changes were coming.

Walker said his $80 million juvenile justice bill, which would close the troubled Lincoln Hills prison in Irma, was in a “great spot” and would “pass overwhelmingly in the Senate.” But minutes earlier, Republican Senate Majority Leader Scott Fitzgerald said the bill was “not ready for prime time.”

That proposal is one of several Walker priorities that passed the Assembly but remains in limbo in the Senate, with reticent Republicans there talking about changes that would force the Assembly back into session after it had adjourned for the year.

Another Walker priority in trouble is a $100 per-child tax rebate and August sales tax holiday. Walker wants the rebate to arrive before the school year starts, just months before he’s on the ballot for re-election. Walker would pay for the $147 million tax cut out of a budget surplus, money he argues must be returned to taxpayers.

But Fitzgerald said the sales tax holiday, which Republicans have derided as a “gimmick,” doesn’t have the votes to pass. And Republican Sen. Luther Olsen, of Ripon, said he wants to scrap the whole thing and use most of the money to pay for school safety improvements.

Walker said after the meeting with Republican senators that he told them he was open to compromise.

“There’s going to be some give and take and I think we can get there,” Walker told The Associated Press.

Walker seems to be near an agreement with Fitzgerald on the best approach for school safety. They both said separately they want to focus on shoring up the safety of school buildings and other propert. Fitzgerald didn’t put a dollar amount on it, but ruled out allowing schools to raise more in property taxes to pay for it.

Walker, again, likened the changes he’s pushing to how airport security was upgraded after the 9-11 terrorist attacks. Walker plans to announce his proposals by March 20, the last session day for the Senate to vote on bills this year.

The Republican-controlled Assembly approved making grants available to schools to pay for more armed guards, an approach Walker has previously said he supports. But Fitzgerald said Wednesday that’s not a focus for Republicans.

State Superintendent Tony Evers, one of the most prominent Democrats running for governor, sent Walker and legislative leaders his ideas this week. They include giving schools $50 million more to invest on hiring more security guards and counselors and more services designed to reduce school violence.

Olsen, chairman of the Senate Education Committee, said he wants to give schools roughly $100 million in categorical aids to spend on security needs as they see fit.

“It has to be substantial enough that it does some good,” Olsen said. “Let’s invest it wisely.”

Walker and Senate Republicans appear to be farther apart on juvenile justice. The Assembly unanimously passed a bill that would close the Lincoln Hills juvenile prison by 2021, move the most violent inmates into state-run facilities and put counties in charge of housing the rest.

Fitzgerald bristled at the bipartisan negotiations that led to the bill’s passage but did not include him, calling the process “horrendous.”

“It didn’t go through the right channels,” Fitzgerald said. “I don’t think we had the right people in the room. … As a result of that it’s not ready for prime time.”

Walker, citing support from counties and sheriffs, said the bill was in a “great spot.”

“I haven’t heard yet what a specific concern is but if there is one we’re willing to listen,” Walker said.