Trump blames media for condemnation of comments on Virginia 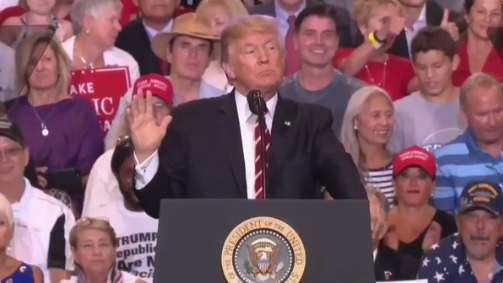 PHOENIX — President Donald Trump blamed the media Tuesday for the widespread condemnation of his response to a Charlottesville, Virginia, protest organized by white supremacists that led to the killing of a counter-protester.

Trump opened his political rally in Phoenix with a call for unity, saying, “What happened in Charlottesville strikes at the core of America and tonight, this entire arena stands united in forceful condemnation of the thugs that perpetrated hatred and violence.”

But he quickly trained his ire on the media, shouting that he “openly called for healing unity and love” in the immediate aftermath of Charlottesville and claiming the media had misrepresented him. He read from his three responses to the violence — getting more animated with each one.

Democrats and fellow Republicans had denounced Trump for placing blame for the Charlottesville violence on “both sides.” Trump omitted that part of his reaction from his recap Tuesday night.

“You know where my heart is,” Trump said. “I’m only doing this to show you how damned dishonest these people are.”

After the rally, a day of noisy but largely peaceful protests outside the Phoenix convention center turned unruly as police fired pepper spray at crowds after someone apparently lobbed rocks and bottles at officers.

Trump spoke after Vice President Mike Pence and others called repeatedly for unity.

Trump teased a pardon for former sheriff Joe Arpaio, asking the crowd what they thought of him. Loud cheers erupted. The former Maricopa County sheriff is awaiting sentencing after his conviction in federal court for disobeying court orders to stop his immigration patrols.

“So was Sheriff Joe convicted for doing his job?” Trump asked. “I’ll make a prediction: I think he’s going to be just fine.”

Earlier, White House press secretary Sarah Huckabee Sanders said Trump wouldn’t discuss or take action on a pardon “at any point today,” even though the president had told Fox News he was considering it.

Trump said at the rally that the only reason he wouldn’t pardon Arpaio from the stage was to avoid controversy for the moment.

In the comfort of his most fervent fans, Trump often resurrects his free-wheeling 2016 campaign style, pinging insults at perceived enemies such as the media and meandering from topic to topic without a clear theme. Although Trump’s high-profile warm-up acts suggested the president’s speech would be about unity, the president was more intent on settling scores. And the tone of the event took on a combative tone.

At one point, the president threatened to shut down the federal government unless Congress, mired in gridlock over spending bills, agrees to provide funding for the border wall he wants to have built between the United States and Mexico.

Trump told the crowd, he said he has a message for “obstructionist” Democrats. “If we have to close down our government, we’re building that wall.”

He skewered both of Arizona’s Republican senators — but coyly refused to mention their names, describing his own restraint as “very presidential.”

Instead, Trump bemoaned that the Senate was only “one vote away” from passing a health care overhaul. Sen. John McCain, who is undergoing treatment for an aggressive form of brain cancer, voted against a Republican health care bill.

Trump called another unnamed senator “weak on borders, weak on crime.” Trump has lashed out at Sen. Jeff Flake, a frequent critic, using the same language in the past.

The president tweeted last week: “Great to see that Dr. Kelli Ward is running against Flake, who is WEAK on borders, crime and a non-factor in Senate. He’s toxic!” Flake has been on tour promoting his book that says the Republican Party’s embrace of Trump has left conservatism withering.

Ward attended Trump’s rally, but did not appear onstage.

In a modest but telling swipe at Ward — and, by extension, at Trump — the Senate Leadership Fund, a political committee closely aligned with Senate Majority Leader Mitch McConnell of Kentucky, is spending $10,000 on digital ads that say of her, “Not conservative, just crazy ideas.”

Trump began his Arizona visit with a brief trip to the southern edge of the country.

While touring a Marine Corps base in Yuma that is a hub of operations for the U.S. Border Patrol, Trump inspected a drone and other border equipment on display in a hangar.

Trump shook his head as he was shown a series of everyday objects, such as a fire extinguisher, that had been refashioned to secretly transport drugs across the border. Afterward, he spent about 20 minutes greeting service members in the grueling, 106-degree heat, signing caps with his “Make America Great Again” campaign slogan and posing for selfies on the tarmac just steps from Air Force One.