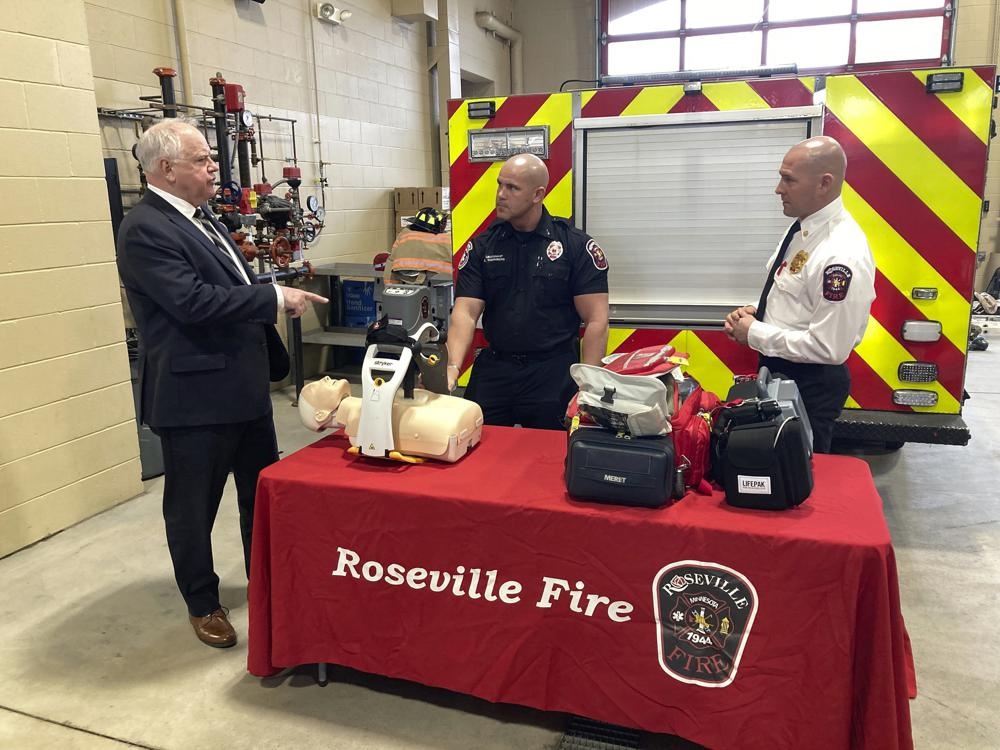 Minnesota Gov. Tim Walz, left, watches a demonstration at the Roseville, Minn., Fire Department Monday, Jan. 23, 2023, of a machine that performs chest compressions to help first responders perform CPR. Discussing the LUCAS device with him are Lt. Cody Thornberg, center, and Fire Chief David Brosnahan, right. Walz went to the station in suburban St. Paul, to roll out more pieces of his budget, including $300 million to support public safety agencies across the state. (AP Photo/Steve Karnowski)

ROSEVILLE, Minn., (AP) — Minnesota Gov. Tim Walz rolled out more pieces of his budget Monday, calling for $300 million to support public safety agencies across the state, over $1 billion to expand affordable housing, and allowing more residents to buy into the MinnesotaCare health plan for the working poor.

The Democratic governor went to the Roseville Fire Department to highlight the health, safety and housing components of his two-year budget proposal, which he is scheduled to unveil in full on Tuesday.

Walz’s overall general fund budget is expected to total in the high $50 billion range, while one-time spending from the state’s $17.6 billion surplus could boost the complete package to over $60 billion. While he has made education his top priority, he reiterated Monday that his budget proposal will include rebates to taxpayers from the enormous surplus, which he said could make the difference between being evicted or not for some struggling renters.

The proposed $300 million for public safety would go to cities, counties and tribal governments across the state, based on their population, and they would get wide latitude in deciding how to spend it. Walz made a similar proposal last spring, but the Legislature was divided then between a Republican-controlled Senate and a Democratic-led house. The idea stalled and most of the surplus went unspent amid partisan stalemates. But Walz’s fellow Democrats now control both chambers.

“This proposal will make sure that communities have what they need,” Walz said at a news conference. He added that it will be coupled with increased funding for communities that he’ll announce Tuesday for the state’s separate local government aid program.

Public Safety Commissioner Bob Jacobson said communities would have the flexibility to use the money for recruiting and retaining police officers, for better responses to mental health crises, community engagement or whatever else they need.

“Our public safety folks have been through, like many others, a rough last two or three years,” Jacobson said. “We’ve been through pandemics, we’ve been through the murder of George Floyd, there’s a lot of work for us to do, but part of that is to uplift the folks that are doing that work.”

Roseville Fire Chief David Brosnahan said the money would “truly matter” for cities like his.

“Fire departments and public safety agencies throughout the state share the same mission, but oftentimes have different means and needs to complete that mission, whether it is recruitment or retention of career or volunteer staff, equipment changes or needed upgrades, support for enhanced training or a focused effort on firefighter cancer and mental health awareness and prevention,” Brosnaham said.

But Republicans said the governor’s public safety proposal “comes up dramatically short” of the money that’s needed to fight crime in Minnesota.

“We need to be focused on getting dangerous criminals off the streets and making sure we are investing adequately in local law enforcement so they have the tools they need to investigate and prevent crimes,” House Minority Leader Lisa Demuth, of Cold Spring, said in a statement.

The governor’s housing budget is aimed at increasing the availability of affordable housing statewide for both renters and first-time homebuyers, and preventing homelessness, including money aimed at ending homelessness among veterans, Lt. Gov. Peggy Flanagan said.

Walz said offering a “public option” for MinnesotaCare will be one of his initiatives to improve access to health care and reduce costs for patients, including more choices for the nearly 300,000 Minnesotans who currently don’t have health insurance, with a special focus on all young people 19 and under including the undocumented.

The governor revealed several other pieces of his budget last week, including a plan for education and families that includes big tax credits for families with young children as well as more money for schools across the state. He’s also proposing money to launch paid family and medical leave for workers, to bolster support for small businesses and to expand the workforce in critical sectors. He also proposed an agriculture budget with money to expand the state’s biofuels infrastructure and help new and emerging farmers.

Walz plans to announce his proposal for a public infrastructure borrowing package known as a bonding bill on Thursday.