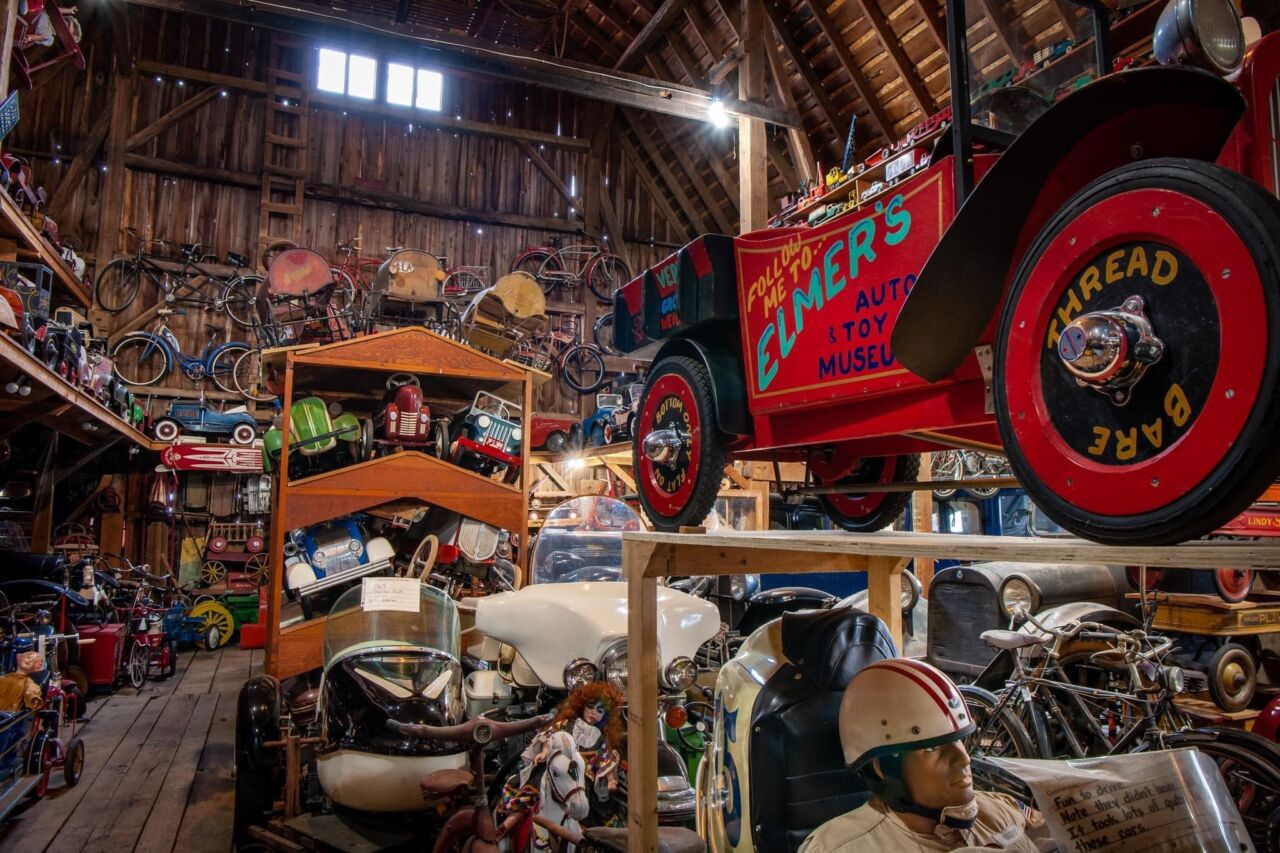 FILE - Inside one of the buildings at Elmer's Auto & Toy Museum in Fountain City, Wis. (PHOTO: @ElmersAutoandToyMuseum on Facebook)

The barn find is often the phrase used by antique collectors who run into an old farm that’s full of items that haven’t seen the light of day in decades.

Beginning Wednesday, the epitome of the barn find — times 2,000 — goes up for auction at Elmer’s Auto and Toy Museum.

One of the biggest auction companies in the world will be selling off some of the rarest antiques on Earth and it all happens over the next four days in Fountain City, Wisconsin — population 809.

“I mean, this is really a major collection and a major opportunity for collectors to take advantage of just how specific and careful he was about his collecting strategy,” John Kraman said on La Crosse Talk PM.

Kraman is the TV voice of Mecum Auctions. Mecum is conducting the event — a company that televises auctions on MotorTrend TV, where cars sell for millions of dollars.

Kraman said that while the items at Elmer’s museum are so rare and some one-of-a-kind, collectors also value where they got them.

“Not just the individual items, but it’s the story that goes along with it,” Kraman said. “And I think the fact that they’re all under the halo of this Elmer’s collection that’s going to put — literally anything bought from here — on a bit of a pedestal. And they’ll be proud to say, ‘I got that at Elmer’s.’”

Last month, Brad Duellman talked about his dad’s museum and told the story of how the family ended up with a Model A in the living room.

Kraman noted that Model A and many other vehicles will be included, as everything in all five buildings and the house-garage will be auctioned off.

Over 2,000 items, from oil cans and pedal cars to muscle cars — cars that have sat for decades, have never been driven, still have the plastic on the seats and that new car smell.

Kraman said the 1966 all-original GTO spoke to him, as does, what he called most “precious, newest 1978, 25th Anniversary, Collector’s Edition Corvette on the planet.” The car has 5.4 miles on it and Kraman said still has that new car smell.

How much is it all worth? Kraman wouldn’t say. Perhaps because that’s the nature of working for an auction company or because the items are so unique. But he did say they have done auctions like this in the past.

“No, we haven’t put any auction estimates on anything,” Kraman said. “The variety and uncertainty and rarity of a lot of these items — some of these items date back to the early 1900s and are believed to be the only known examples, especially when it comes to some of these pedal cars.”

For those who want to spectate the auction, you can’t. But you can be a bidder and attend. That’ll cost you $100, which includes all four days. Collectors can also bid and view the items online here.