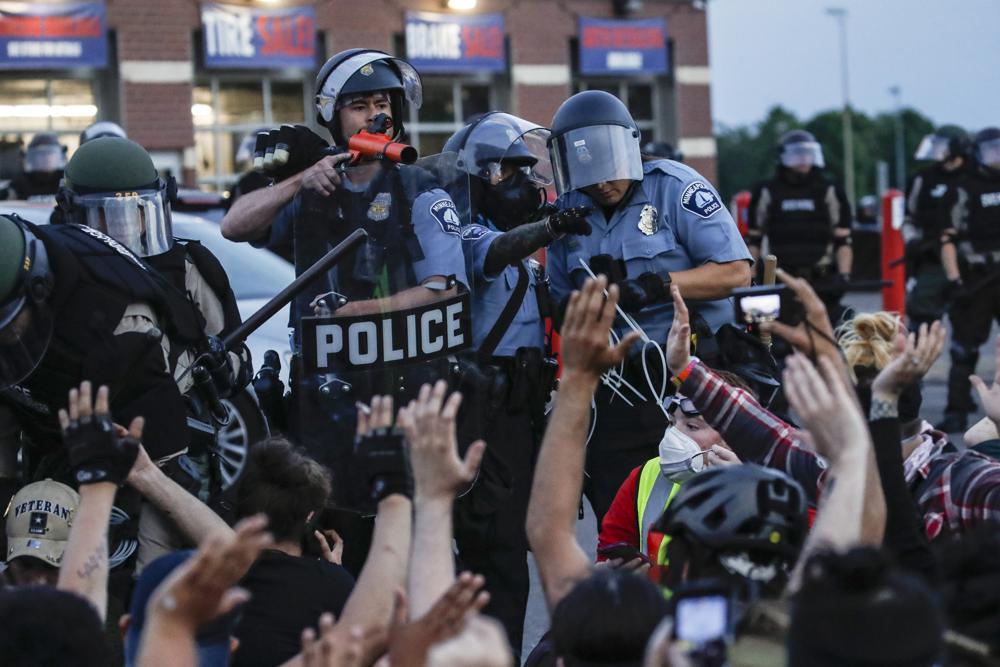 FILE - In this Sunday, May 31, 2020, file photo, a police officer points a hand cannon at protesters who have been detained pending arrest on South Washington Street, as protests continued following the death of George Floyd, in Minneapolis. (AP Photo/John Minchillo, File)

DES MOINES, Iowa (AP) — An assistant attorney general in Iowa is suing the city of Des Moines and its police chief over his arrest during a June 2020 racial justice protest, alleging he was tackled, pepper-sprayed and handcuffed for no reason.

The lawsuit filed by Assistant Attorney General Paxton Williams is among at least eight cases filed against the Des Moines police, the Des Moines Register reported. The cases involve protests following George Floyd’s death in the custody of Minneapolis police.

Williams, who is Black, alleges police used unnecessary and excessive force in arresting him in front of his home. The lawsuit, filed May 31 in Polk County District Court, says Williams felt the effects of the pepper spray for several days and suffered shoulder, arm and hip pain.

According to court records, a failure-to-disperse citation that Williams received was dismissed under an agreement requiring him to avoid further criminal charges for six months.

A representative for the police department did not immediately respond Tuesday to an email seeking comment about the lawsuit. A spokesperson for the attorney general’s office, Lynn Hicks, declined to comment, calling it a “personal matter.”

Williams also is suing a police sergeant and 10 unnamed officers. He alleges the sergeant told him hours after his arrest that police video refuted Williams’ claims.