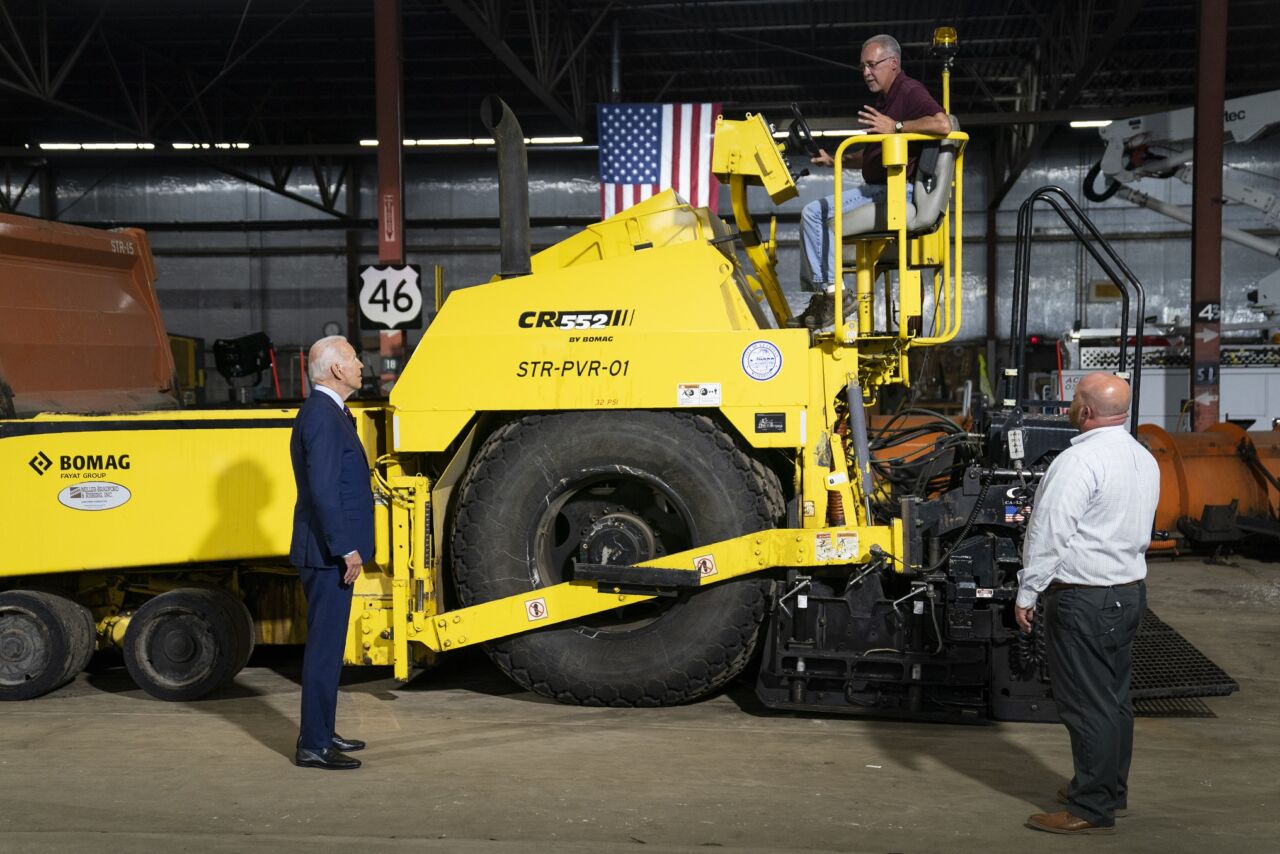 Sure, Wisconsin is the dairy state. But for those living here, snow plows and road construction signs might be more “Wisconsin” than cows and cheese.

When President Joe Biden visited La Crosse, almost exactly a month ago, he missed out on some prime photo opportunities to be very “Wisconsin.” To relate to the plight of those living in the upper-Midwest. And he was right there. He was right next to those rigs in the “Bus Barn” on Isle La Plume.

Funny, none of the signs welcoming or protesting President Biden’s visit to the city said “Fix the roads!”

We all like to relive our childhood once in a while — even presidents.

Donald Trump was really good at it. We’ve seen the former President in a big rig, in a fire truck, looking like, well, how he looked.

When Biden visited La Crosse and that bus barn to promote infrastructure, there could not have been a better time to be more Wisconsin than jumping in an orange snow plow or some road paver.

La Crosse Municipal Transit Utility (MTU) manager Adam Lorentz was asked jokingly Tuesday on La Crosse Talk PM if he was hoping Biden would do just that. Lorentz felt like Biden’s team might have wanted to. The Secret Service, however, did not.

“They look at every absolute angle you could think of,” Lorentz said of the Secret Service. “And they make sure the President’s not put into any type of predicament he shouldn’t be in.

“So, the big orange snowplow? That was one of the predicaments they would not allow.”

So, Biden’s team didn’t take advantage of the most obvious of photo ops — though he did stop to get ice cream at The Pearl, downtown — but it sounded like they wanted to.

“It was interesting to watch the political side of President Biden’s team,” Lorentz said. “To have them, I don’t want to call it ‘Go to battle,’ but have them have disagreements with the Secret Service. They had all these ideas for him to be underneath a doorway, or underneath a truck, and the Secret Service put a stop to all that.”

Lorentz said he had about 36 hours to get ready for Biden’s visit. But asked — again, jokingly — if that meant Lorentz was going to spruce the place up all fancy, or make everything look disheveled so the President would throw him some more funding, Lorentz said, seriously, Biden wasn’t getting anything you wouldn’t see every day in the barn — for the most part.

“Well, they wanted real, they wanted realistic,” Lorentz said. “So, what you saw on TV, I’ll say, was 80% real. Obviously there was some staging — that’s what they do. But that was our shop. That’s where the busses and all the street plows get worked on.”

As for how it was that Biden ended up in La Crosse in the first place, Lorentz said a prior visit from a certain Lieutenant Governor in Wisconsin, checking out the city’s new electric busses, might have had something to do with that.

“We had Lt. Gov. Barnes here (a couple months ago),” Lorentz said. “So, when the White House staff called the state of Wisconsin — the Capitol office there — it was actually recommended to put this location as one of the possibilities.”

Barnes, who just last week announced he is running for US Senate in Wisconsin, was in La Crosse in early April discussing alternative modes of transportation, including the city’s recently acquired two electric busses. The city will be getting two hybrid busses in 2022.