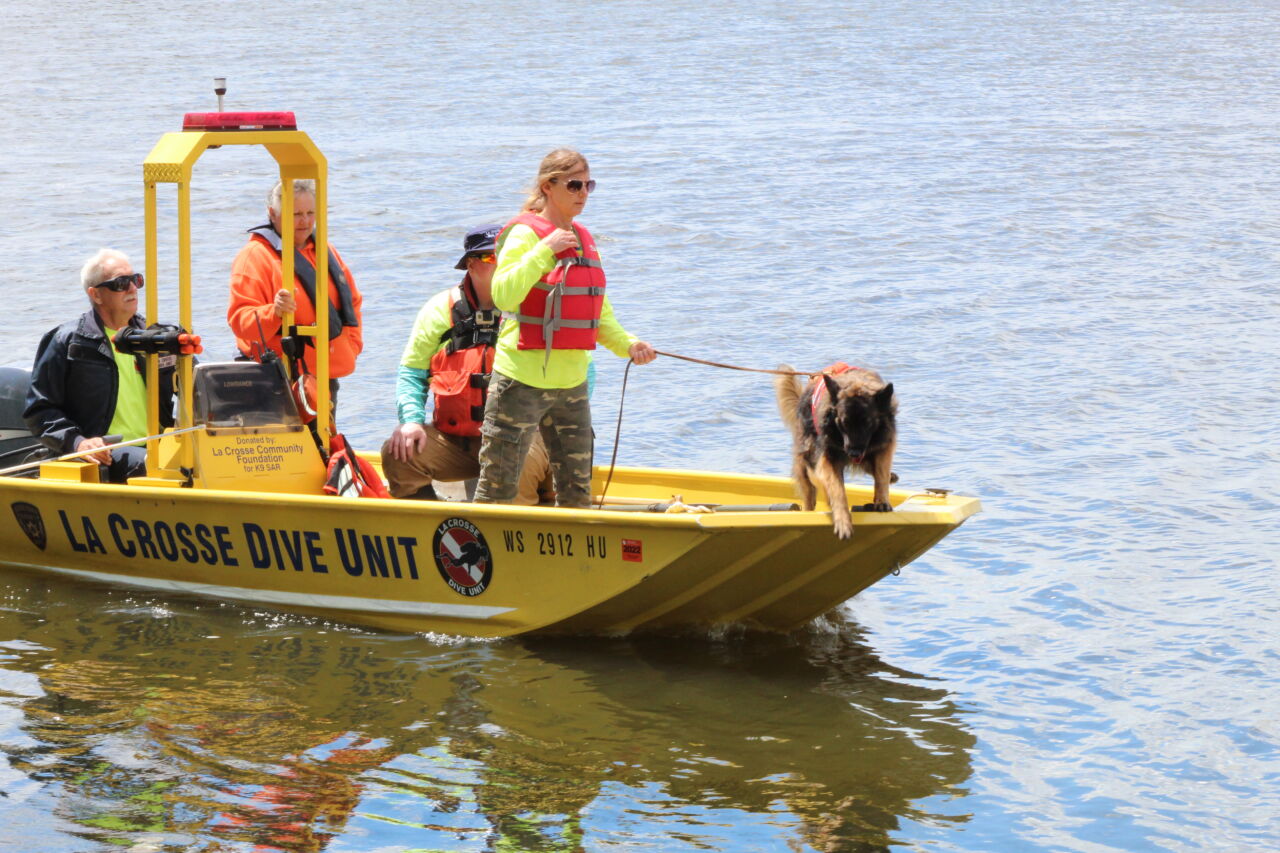 It’s not quite what you would expect from a dog as part of a search and rescue dive team. Not until you think about it for a minute.

On a boat, helping a dive team look for someone that’s fallen into, say, the Mississippi River, the dog isn’t making any heroic dive into the water, to pull up a drowning person.

The dog’s role is all nose. Their handler’s role is reading the pup’s reaction. Then it’s up to the dive team to do the hard work.

The La Crosse Dive Unit wraps up three days of a training workshop Wednesday. The media was invited to watch a dog in action on the boat, simulating a person in the water.

If you don’t know what you’re looking at, it just looks like a dog playing with a toy in a boat. Because that’s sort of what they’re doing — playing.

“They are,” trainer Jenny Sauer said. “It’s very serious to us, but to them it’s a game. So, they’re working for their toy.”

Sauer said the dog will be able to get the scent of air that bubbles up from underwater, indicating that’s where the dive team needs to go to work. Watching though, the dog let’s the handler know simply by getting a little hyper in the boat.

That’s where the handler-dog relationship through training like this comes in. Sauer said it probably takes the human longer to train than the dgo.

“The dogs figure out what you want them to do really quickly,” Sauer said. “It’s just having the human be able to read what they’re telling us and making that partnership with the dog.”

Different dogs react differently, but the pup used in a simulated run during the workshop for the media just looked like a dog that was excited about seeing something in the water.

Treats and toys are the reinforcement tools used to train and reward the dogs, Sauer said.

She also mentioned, if a dog gets a treat, it does not have to wait 15 minutes before going into the water.

There are 25 people, three dogs on the La Crosse Dive Team roster — all volunteers.

The La Crosse Community Foundation brought in one of the nation’s experts in K9 searches, Lisa Higgins, for the workshop. Higgins is a qualified Subject Matter Expert using K9s for body recovery in New Orleans criminal courts. She also serves as a civilian contractor K9 handler with the FBI.