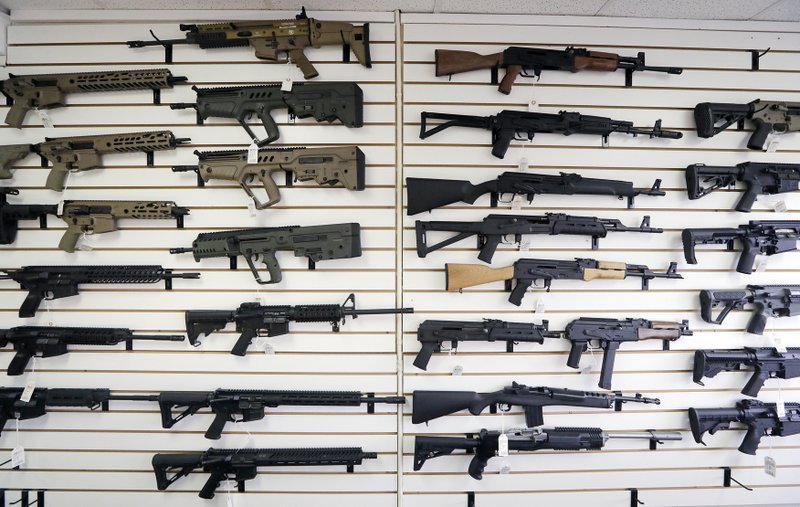 FILE - In this Oct. 2, 2018, file photo, semi-automatic rifles fill a wall at a gun shop in Lynnwood, Wash. Mass shootings in Georgia and Colorado in March 2021, that left several people dead, have reignited calls from gun control advocates for tighter restrictions on buying firearms and ammunition. But with Democrats in control of the federal government, gun rights advocates have been persuading Republican-run state legislatures to go the other way, making it easier to obtain and carry guns.(AP Photo/Elaine Thompson, File)

Mass shootings in Georgia and Colorado that left at least 18 people dead since last week are reigniting calls from gun control advocates for tighter restrictions on buying firearms and ammunition. But with Democrats in control of the federal government, gun rights advocates have been persuading Republican-run state legislatures to go the other way, making it easier to obtain and carry guns.

How are the politics of gun legislation playing out in the United States this year? Here’s the breakdown.

This month, the Democrat-controlled U.S. House of Representatives adopted measures to expand background checks to all gun purchases and expand the time to to vet people flagged in a nationwide background check system.

But to pass in the Senate, the support of every Democrat would be needed. And that’s not a sure thing.

States led by Democrats are pushing to expand some gun control laws.

Maryland lawmakers overrode a veto from Republican Gov. Larry Hogan on a bill that requires background checks for all sales and transfers of rifles and shotguns. Previously, the checks were required only for sales of handguns and long guns by licensed firearms dealers.

In Washington state, a ban on high-capacity magazines has stalled, but a measure to ban carrying weapons openly at the state Capitol or during permitted demonstrations has cleared one house of the Legislature and is awaiting a vote in the other.

California lawmakers are expected to require individual identifiers on all bullet casings to include weapons used by law enforcement. Proponents say the pending legislation is another attempt to help investigate shootings by police as well as make it easier to solve crimes. Critics say it’s based on unworkable technology.

At least five states also have bills that would require or expand waiting periods before the purchase of a gun.

Lawmakers in at least a dozen states have introduced legislation that would prohibit local police officers from enforcing any federal gun-control laws that could be passed by congressional Democrats and signed by President Joe Biden. Some of the bills would make officers who do so subject to lawsuits or even criminal charges.

Some states also are considering bans on future laws or local ordinances that would restrict gun rights. In New Hampshire, Republican lawmakers are pushing a state constitutional amendment that would block the Legislature from restricting gun rights. The amendment ultimately would need voter approval.

Another bill would block local governments from restricting firearms.

Several states are expanding where people can take their guns.

Most adults over 21 would be allowed to carry firearms — either concealed or in the open — without a permit under a measure advanced by the state Senate in Tennessee this month.

Most states require background checks and firearm safety training for people who want to be allowed to carry weapons in public. But 15 states already have laws allowing permitless carry for concealed guns. Nine states are considering measures to allow or expand the practice. One was sent Monday to Iowa Gov. Kim Reynolds, a Republican, for her signature.

In Montana, Gov. Greg Gianforte, the first Republican to hold the job in 16 years, signed a bill that relaxes gun restrictions. It allows concealed firearms to be carried in most places without a permit and expands the list of places where guns can be carried to include university campuses and the state Capitol. Similar measures are being pushed in states that include Oklahoma and West Virginia.

In January, Ohio Gov. Mike DeWine, a Republican, signed a so-called “Stand Your Ground” bill that eliminates an individual’s duty to retreat before using force.

DeWine acted despite his ongoing criticism of GOP lawmakers for ignoring his own legislation seeking to toughen background checks and boosting penalties for felons committing new crimes with guns. The governor proposed those measures following a 2019 mass shooting in Dayton.

A similar “Stand Your Ground” measure has been approved by the South Dakota Legislature and is awaiting Republican Gov. Kristi Noem’s signature.

THE STATE OF THE COURTS

A federal judiciary system that is more conservative after nominations by former President Donald Trump gives gun-rights advocates hope that pro-gun measures will be left intact by courts and restrictions will be tossed out.

One big test has been in California. In 2016, voters there approved a measure banning magazines holding more than 10 rounds of ammunition.

Two federal courts have struck down the restriction. Last month, the 9th Circuit Court of Appeals agreed to have 11 judges consider the case.

Last June, the U.S. Supreme Court declined to hear challenges to several gun-control laws. Since then, liberal Justice Ruth Bader Ginsberg has died and her former seat has been filled by a conservative Trump appointee, Amy Coney Barrett.