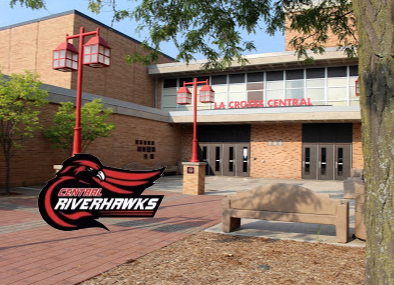 Central High School will become the RiverHawks, after dropping the “Red Raiders” nickname in 2020 because of controversy.

In November, the La Crosse School District announced both the name “Red Raiders” and the existing mascot on horseback would be retired as part of the district’s goal to be culturally sensitive and inclusive.

“I felt our previous logo and nickname has brought a lot of pride to Central, but as we move forward, I really want this to be something that our students and staff would feel a great deal of pride and support for,” La Crosse Central Principal Troy McDonald said in an update with the La Crosse School Board Monday night.

McDonald said the school gathered suggestions, and the Student Senate and Department Chairs were asked to vote on the top choices on Jan. 4. On Jan. 18, a survey with the elite eight was sent out to all students and staff to determine the new mascot.

“When we got the initial group of finalists for the name, I sent that out to some of our clubs including GSA, our Indigenous People Club, our FEM Club, just making sure there wasn’t anything I was missing,” he said. “Being an older, white male, there are sometimes things I don’t fully understand. I wanted to make sure there wasn’t something that would be inappropriate or offensive.”

With 558 responses, the final vote went to RiverHawks followed closely by the Bandits. Games People Play began working on different logos, and 537 voted for the final design. The school’s brand will still look familiar with the same red and black colors and the use of LC.

“Actually, the last couple of years we’ve talked about using that as our main logo, so that is something that will continue to move forward,” McDonald said.

Central is still seeking full approval from the administration to move forward with the new RiverHawks mascot, but McDonald hoped it would be ready in time for sports this spring.

The decision to retire the “Red Raiders” name and mascot has been met with some pushback from the community and Central alumni.

McDonald said the school has been talking with both community members, parent groups and staff for years about changing the name.

“The support has varied at different levels,” he said. “Obviously, there is a lot of pride and a lot of tradition that goes into the past mascot. As a former Central student, somebody who has coached at Central, and now as a principal, I certainly understand that pride. It is well-intentioned This does not diminish the pride that people have had. In order to make Central a safe place for everybody, I felt that we needed to move forward.”

Engel noted it will be a costly and timely process to change over equipment, uniforms, and even logos embedded into the school’s facilities.

“It is one that we will invest in, but it is not usually something that happens overnight,” he said. “It often involves sanding gym floors and taking out bricks here and there depending on the amount of commitment you had to your previous logo.”

Engel added that the project could be spaced over a few months or even years to complete in a financially responsible way. Fortunately, McDonald noted they had already started transitioning to the LC logo, which will help reduce costs, but there are still marble floors, signs, uniforms, and other branded school property that will need to be changed.

Board Member Shaundel Spivey said he saw this as an opportunity to take action and to right wrongs. He asked McDonald if, in addition to celebrating the new logo, there would be plans to acknowledge how the previous mascot may have harmed people in the past and apologize.

“When we talk about communities of color and those that have been marginalized and oppressed, to see that and to feel that acknowledgement is really important,” Spivey said.

McDonald said the school was working with the Ho-Chunk Nation to have a ceremony or diversity day before COVID-19 interrupted the school year. Central also added a Ho-Chunk flag to its main gym.

“Obviously as we move forward, we do want to talk about embracing what has happened in the past and moving forward,” McDonald said. “I want to work with the Ho-Chunk Nation to move forward.”