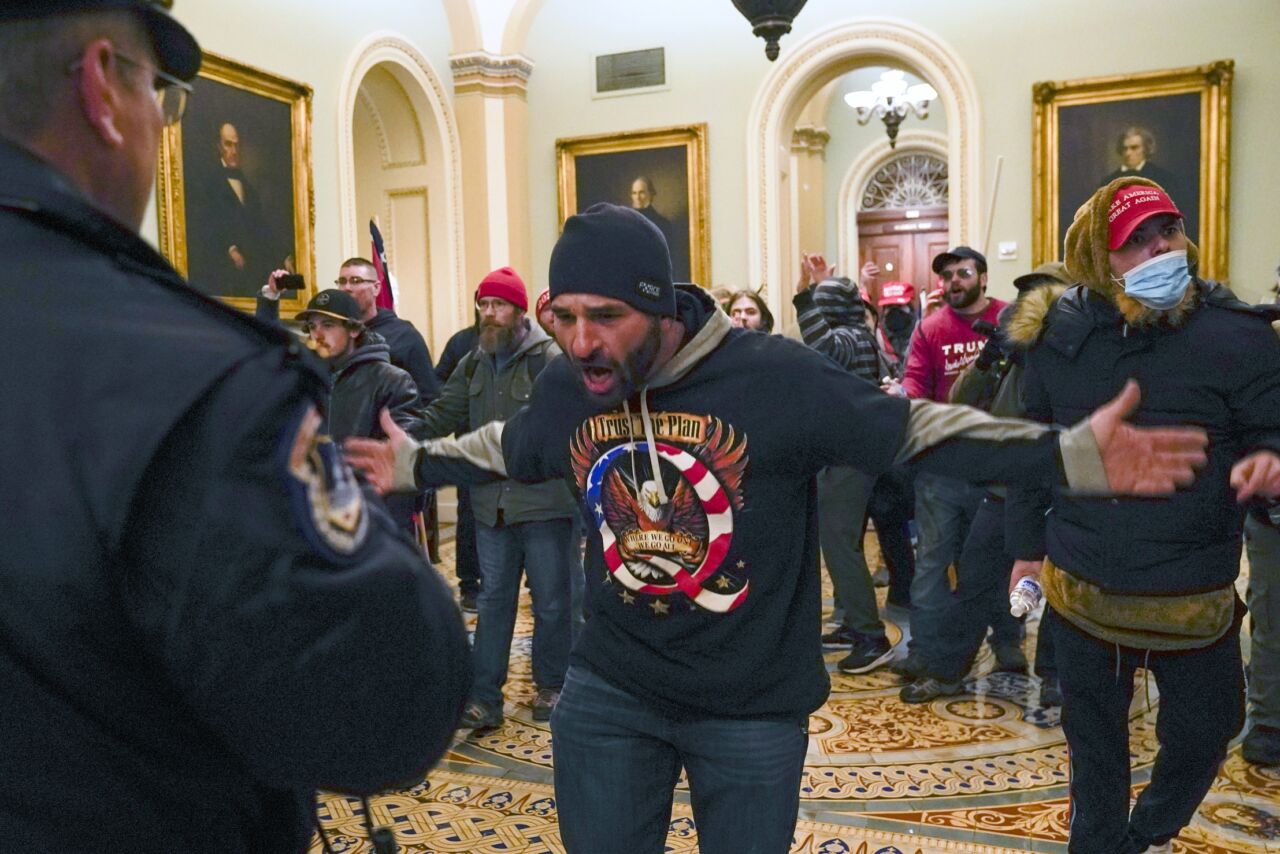 FILE - Trump supporters gesture to U.S. Capitol Police in the hallway outside of the Senate chamber at the Capitol in Washington, Wednesday, Jan. 6, 2021. (AP Photo/Manuel Balce Ceneta)

MADISON, Wis. (AP) — A local Republican group in northwestern Wisconsin refused to take down an online message urging conservatives to “prepare for war” despite urging from the state GOP and the violence last week at the U.S. Capitol.

The St. Croix County party’s chairman, John Kraft, said the message went up before right-wing extremists stormed the U.S. Capitol on Wednesday. He did not say when it was posted and he didn’t immediately respond to messages from The Associated Press on Monday.

The Capitol attack left five people dead including a police officer and has prompted widespread calls for unity and toning down inflammatory rhetoric. Andrew Hitt, chairman of the Wisconsin Republican Party, said in a statement Monday that the party suggested to the county party that the message should be removed, but the county party refused.

The message begins with “if you want peace, prepare for war” and “welcome to the digital battlefield.” It goes on to say that President Donald Trump changed the Republican Party and conservatives have watched for four years as Democrats “in concert with the Marxist left and a complicit mass media has done everything possible to overturn the 2016 election through any means necessary.” It also repeats false claims that the 2020 election was rigged against Trump.

“It’s time to stand and be counted as a conservative warrior in the on-going fight to preserve our Constitutional Republic,” the site says. “Please join us. We need to start local by removing leftist tyrants from all local and County (sic) positions in the future April elections.”

Kraft told the Milwaukee Journal Sentinel that he can’t help what “twisted inferences” Democrats draw from the message.

Democrat Joe Biden defeated Trump by about 7 million votes in the Nov. 3 election. Trump maintains Democrats stole the election from him, though no evidence exists of any widespread fraud.

Kraft posted on his Facebook page Sunday that “it’s never been clearer that we are absolutely at war with the left.”

Meanwhile Monday, workers boarded up windows at the state Capitol in Madison amid threats that right-wing groups may try to incite violence at statehouses across the country this weekend. Molly Vidal, a spokeswoman for the state Department of Administration, which oversees the Capitol, declined to comment when asked if the department has learned of any threats specific to the Wisconsin Statehouse. An FBI spokeswoman also declined to comment.

The Capitol’s windows were boarded up for months this summer and fall after demonstrators protesting police brutality smashed out windows and tore down two statues on the Capitol grounds, one of abolitionist Hans Christian Heg and one of a woman embodying Wisconsin’s “Forward” motto.