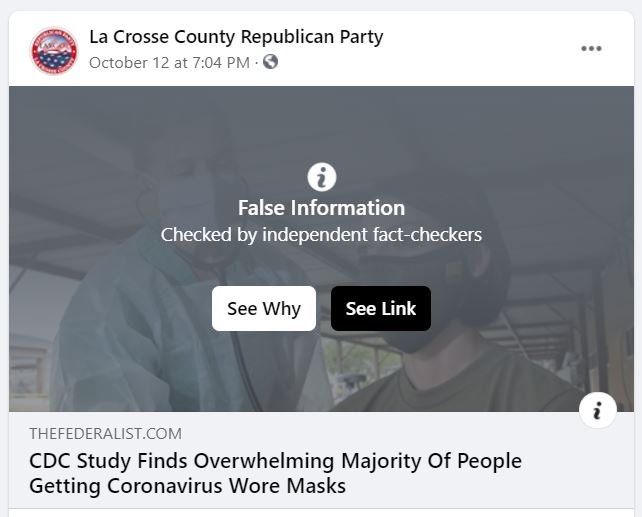 One of two posts shared recently by the La Crosse County Republican Party has been flagged by Facebook as fake news. (screenshot)

After the “repeated sharing of false news,” the La Crosse County Republican Party’s Facebook page has been sent to stand in the corner.

Republicans can no longer advertise on Facebook and the page will have reduced distribution and other restrictions, according to Facebook screenshots from the party.

Facebook also said “People will also be able to see if a page has a history of sharing false news.”

The party spent $745.50 on ads the past “couple months” according to Empower Wisconsin, a website that features, on its homepage, a link dedicated solely to conservative memes.

That story goes on to say La Crosse County Republican Party chair Bill Feehan thinks the page was “censored” because it shared a Daily Caller video of Rudy Giuliani ranting about Hunter Biden.

That video remains unhindered on the page but other posts have been flagged for “False Information,” including this meme of Donald Trump saying, “The doctors said they’ve never seen a body kill the Coronavirus like my body. They tested my DNA and it wasn’t DNA. It was USA.”

Meanwhile, the Facebook page of the La Crosse County Democratic Party didn’t have any flagged posts through at least September, before I got sick of scrolling down.