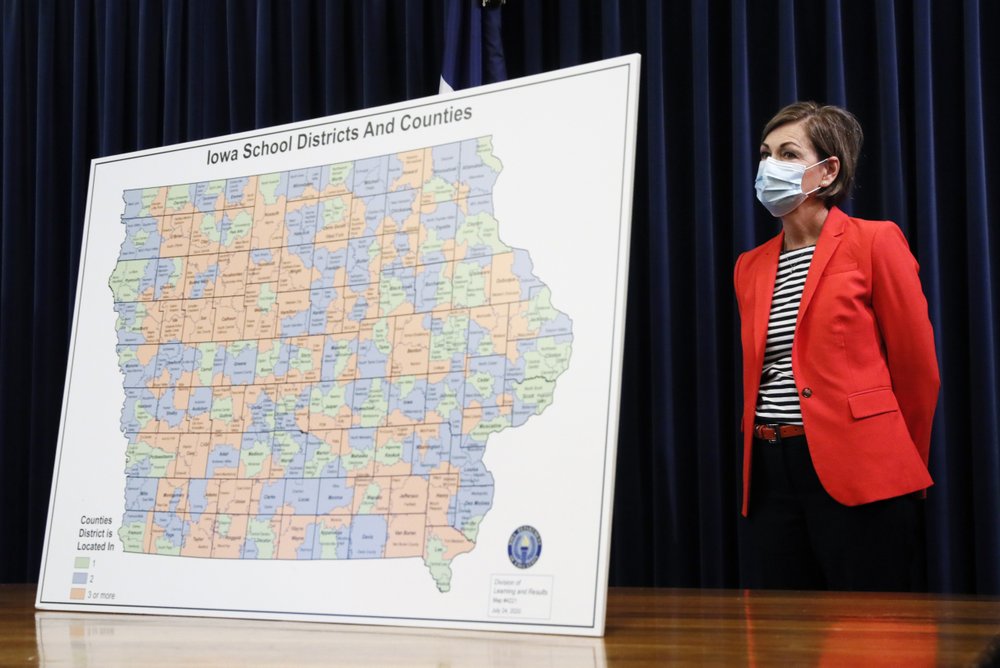 FILE - In this July 30, 2020, file photo, Iowa Gov. Kim Reynolds listens to a question during a news conference on the state's guidance for returning to school in response to the coronavirus outbreak in Des Moines, Iowa. An aggressive push by Reynolds to reopen schools amid a worsening coronavirus outbreak has descended into chaos, with some districts and teachers rebelling and experts questioning the scientific benchmarks being used by the state to make decisions. (AP Photo/Charlie Neibergall, File)

IOWA CITY, Iowa (AP) — An aggressive push by Iowa’s governor to reopen schools amid a worsening coronavirus outbreak has descended into chaos, with some districts and teachers rebelling and experts calling the scientific benchmarks used by the state arbitrary and unsafe.

The clash in the Midwest has illustrated in condensed form the tension between science and politics — and between economic concerns and health fears — that has characterized the nation’s response to the outbreak from the White House on down. The virus has devastated the U.S. economy and killed over 170,000 Americans.

“We’re about to see a tragedy occur in the state. And there’s not a lot we can do about it. That’s frightening,” said Sara Anne Willette of Ames, a parent and former math tutor who runs a website tracking state infection data.

The conflict intensified Wednesday when the statewide teachers union announced a lawsuit challenging the governor’s ability to make such decisions for local districts. The Iowa City school board, which like many others had planned to start the year fully online, voted to join the lawsuit.

In her order, the governor said districts where 15% or more of coronavirus tests were positive over the prior 14 days can request permission to move to online instruction for two weeks at a time.

Health experts say Reynolds’ 15% threshold is not based on science and is three times higher than what the Centers for Disease Control and Prevention suggests is safe. The surgeon general has recommended a 10% limit.

States and local districts have set widely varying thresholds for reopening schools, but Iowa’s is among the highest anywhere.

“They decided they wanted to open schools and then set the threshold, rather than deciding what’s safe and meeting that target. They did it backwards,” said Eli Perencevich, an infectious-disease expert at the University of Iowa.

By contrast, New York City says schools can reopen if positivity rates are below 3%. Arizona has put its rate at 7%.

Perencevich and others warn that it will only be a matter of time before Iowa educators, students and their families face illness and death in growing outbreaks. About a half-million students are preparing to begin school in the coming days.

Reynolds has dismissed the health warnings as scare tactics and, echoing President Donald Trump, argued that children infrequently get seriously ill from or transmit the virus. She has said schools need to be open for children’s benefit and so parents can go to work.

“Education is fundamental to the well-being of our children, and our teachers are essential to ensuring that our schoolkids return to learn rather than mark time and lose ground,” she said. “We can do this safely.”

Reynolds noted that one of her daughters will be teaching in-person classes and eight of her grandchildren will be going to school this fall.

Since her order, Iowa’s outbreak has only gotten worse. Its per capita cases are the highest in the Midwest, the number of patients now in the hospital has increased to nearly 300, deaths surpassed 1,000 Wednesday, and dozens of nursing homes are suffering outbreaks. The governor has refused to order the wearing of masks statewide.

As of Wednesday, only a few districts across the state would qualify to request a waiver under the state’s calculations.

Making matters worse: The data the state is using to calculate local positivity rates has been flawed.

The Fort Dodge district this week said its positivity rate looked grimmer than it really was because a clinic failed to report up to 3,000 negative tests.

Other school districts are seeing worse outbreaks than the state data would indicate. Reynolds’ office announced Wednesday that it is fixing a major flaw in the data that unintentionally backdated thousands of negative and positive test results, which will lower or raise each county’s 14-day positivity rate.

Thomas Tsai, a health policy researcher at Harvard, called Iowa’s 15% threshold arbitrary and said it was made worse by the data problems. He said Iowa is among the states rushing to reopen schools despite not having the virus contained, while others that could safely reopen them haven’t done so.

“You are seeing both extremes,” he said.

The governor’s order also required school districts to give parents the option of choosing online-only education, and many have agonized over what to do.

A storm that damaged school buildings across the state last week with 100 mph winds dealt another blow, and many districts have delayed their start dates so they can clean up and make repairs.

But it also highlighted the friendly relationship between Reynolds and Trump, who traveled to Iowa on Tuesday to discuss the damage with the governor.

Business groups have backed her in her move to reopen schools. Democratic lawmakers and school officials have mostly lined up against her.

“I believe the governor is misinterpreting that law,” said Iowa City school board member J.P. Claussen, who said the state’s metrics “don’t seem designed to keep our staff and students safe.”

The governor has warned that administrators who defy the state could face discipline against their licenses. In addition, the state said schools moving to 100% virtual instruction will not be allowed to offer sports or other activities. That could put pressure on administrators to keep classrooms open even when outbreaks occur.

Under pressure, some districts, including Iowa City, have decided on a hybrid arrangement in which students will go to class two or three days per week.

But the Des Moines district, the state’s largest school system, is still pushing back against the state, despite the county’s positivity rate well below 15%. The school board intends to begin next month in an online-only format but allow sports and other extracurricular activities.