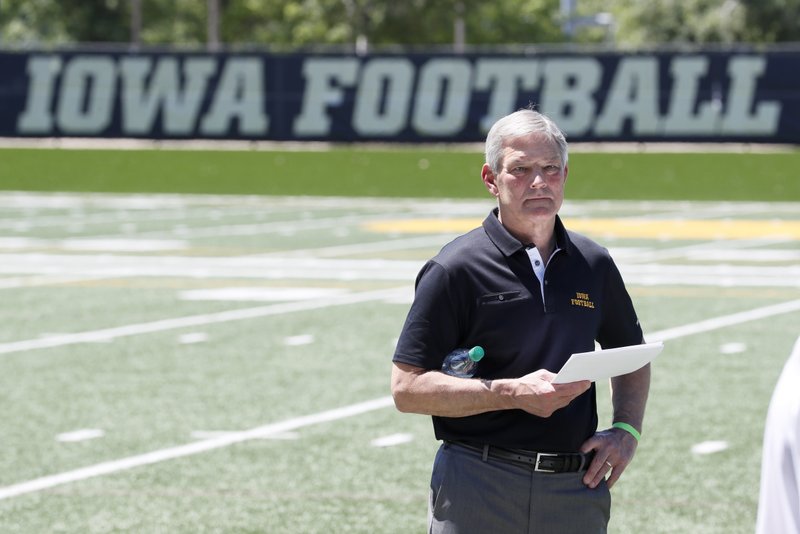 Iowa football coach Kirk Ferentz listens to one of his players speak during a news conference, Friday, June 12, 2020, in Iowa City, Iowa. The Iowa football team took a big step toward improving its lines of communication in the week since the program was hit with allegations of systemic racism, Ferentz and three of his players said Friday. (AP Photo/Charlie Neibergall)

IOWA CITY, Iowa (AP) — Iowa has paused ticket sales for the 2020 football season until there’s clarity about how many people will be allowed to attend games in Kinnick Stadium, the athletic department announced Monday.

Only individuals who have renewed season tickets and completed per-seat contributions by June 30 will be included in potential stadium seating plans. Spokesman Steve Roe said about 35,000 season tickets and 5,000 student tickets have been sold.

“Hawkeye fans are excited for the upcoming season and we truly appreciate their continued enthusiasm and support,” athletic director Gary Barta said. “With the current information available, we needed to pause additional sales and start focusing on reduced capacity seating models based on our season ticket holders. We anticipate finalizing this by late July and will share with our fans.

“The option of having the ability to accommodate as many Hawkeye fans who are comfortable attending a game in Kinnick Stadium is still one of the scenarios.”