Trump says he will renew effort to end DACA protections 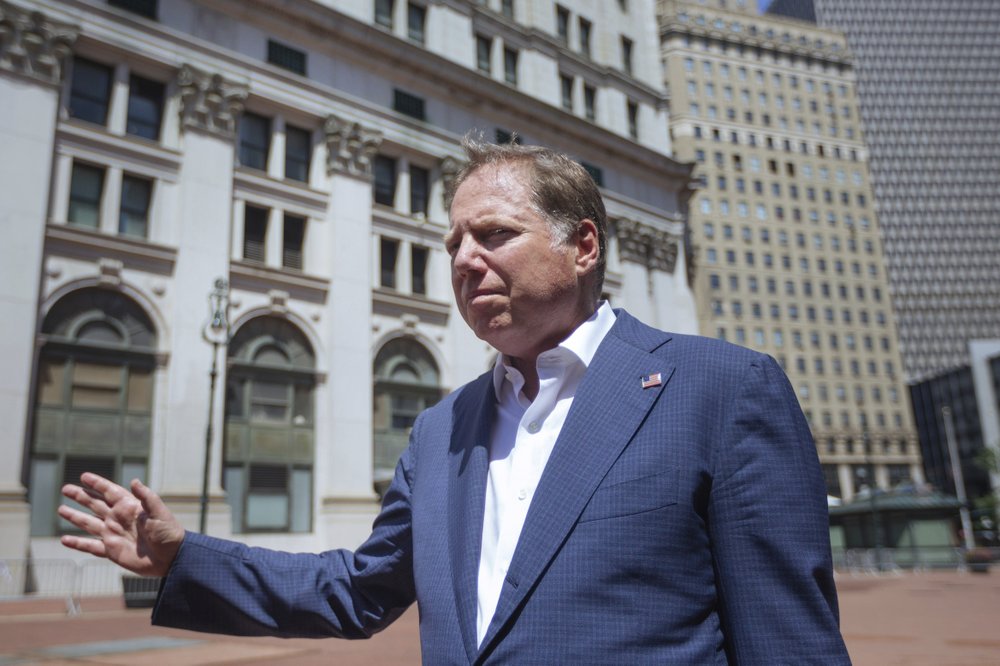 Geoffrey S. Berman, United States attorney for the Southern District of New York, arrives to his office in New York on Saturday, June 20, 2020. The Justice Department moved abruptly Friday night to oust Berman, the U.S. attorney in Manhattan overseeing key prosecutions of President Donald Trump’s allies and an investigation of his personal lawyer Rudy Giuliani. But Berman said he was refusing to leave his post and his ongoing investigations would continue. (AP Photo/Kevin Hagen)

WASHINGTON (AP) — Attorney General William Barr on Saturday told the top federal prosecutor in Manhattan that President Donald Trump had removed him from the job, deepening tensions between the country’s chief law enforcement officer and a high-profile U.S. attorney who had been overseeing investigations of Trump’s allies.

Adding to the confusion, Trump distanced himself from the move to oust U.S. Attorney Geoffrey S. Berman, telling reporters the decision “was all up to the attorney general.” Nevertheless, Berman said he continues to fight his removal.

The whirlwind chain of events began Friday night, when Barr announced that Berman, the U.S. attorney for the Southern District of New York, had resigned. Hours later, the prosecutor issued a statement denying that he had resigned and saying that his office’s “investigations would move forward without delay or interruption.”

On Saturday morning, he showed up to work, telling reporters, “I’m just here to do my job.”

The administration’s push to cast aside Berman set up an extraordinary political and constitutional clash between the Justice Department and one of the nation’s top districts, which has tried major mob and terrorism cases over the years and is investigating Trump’s personal lawyer, Rudy Giuliani. It also deepened tensions between the department and congressional Democrats, who have accused Barr of politicizing the agency and acting more like Trump’s personal lawyer than the country’s chief law enforcement officer.

Only days ago, allegations surfaced from former Trump national security adviser John Bolton that the president sought to interfere in an investigation by Berman’s office into the state-owned Turkish bank in an effort to cut deals with Turkish President Recep Tayyip Erdoğan.

In a letter made public by the Justice Department on Saturday, Barr said he expected to continue speaking with Berman about other possible positions within the department and was surprised by the statement he released.

“Unfortunately, with your statement of last night, you have chosen public spectacle over public service,” Barr wrote, adding that the idea that Berman had to continue on the job to safeguard investigations was “false.”

“Your statement also wrongly implies that your continued tenure in the office is necessary to ensure that cases now pending in the Southern District of New York are handled appropriately,” he wrote. “This is obviously false.”

Although Barr said Trump had removed Berman, the president told reporters: “That’s all up to the attorney general. Attorney General Barr is working on that. That’s his department, not my department.” Trump added: “I wasn’t involved.”

Barr offered no explanation for his action. The White House announced that Trump was nominating Securities and Exchange Commission Chairman Jay Clayton, a well-connected Wall Street lawyer with virtually no experience as a federal prosecutor, for the job.

People familiar with the matter in the Southern District could point to no clear reason for Berman’s removal, though they noted his job had always seemed in jeopardy and Berman was never given the sense that it was secure.

Berman’s office also took actions on some important cases without first informing Washington. But the various investigations are ongoing and no charges seem imminent, said the people familiar with the matter, who weren’t authorized to publicly discuss the matter and spoke to The Associated Press on condition of anonymity.

A senior department official said Clayton was planning to leave the administration, wanted to move back to New York and expressed interest in the Southern District position, and Barr thought he would be a good fit. The official was not authorized to publicly discuss internal department matters and spoke on condition of anonymity.

The chairman of the Senate Judiciary Committee, Sen. Lindsey Graham, R-S.C., said he was unlikely to proceed with Clayton’s nomination unless New York’s senators, Democrats Chuck Schumer and Kirsten Gillibrand, gave their consent to the pick. Schumer said the bid to oust Berman “reeks of potential corruption of the legal process,” and Gillibrand said she would “not be complicit” in helping fire a prosecutor investigating corruption. Both lawmakers called for Clayton to withdraw from consideration.

The chairman of the House Judiciary Committee, Rep. Jerry Nadler, D-N.Y., said his committee was inviting Berman to testify this coming week. Schumer called for the department’s inspector general and Office of Professional Responsibility to investigate.

Berman’s statement Friday night said he would stay on the job until a nominee was confirmed by the Senate. He challenged Barr’s power to remove, given that Berman was appointed by federal judges, not by the president, and the White House never formally nominated him. Under federal law, a U.S. attorney who is appointed by district court judges can serve “until the vacancy is filled.”

But the Justice Department’s Office of Legal Counsel argued in a 1979 opinion that the “power to remove a court-appointed U.S. attorney rests with the president.” It says, “The president is responsible for the conduct of a U.S. Attorney’s office and therefore must have the power to remove one he believes is an unsuitable incumbent, regardless of who appointed him.”

Barr said in his letter that the deputy U.S. attorney, Audrey Strauss, would take over the top job until a permanent successor is in place.

Federal prosecutors in New York have overseen numerous prosecutions and investigations with ties to Trump in recent years. That includes an ongoing investigation into Giuliani’s business dealings, including whether he failed to register as a foreign agent, according to people familiar with the matter. They were not authorized to discuss the investigation publicly and spoke on the condition of anonymity.

The office has also prosecuted a number of Trump associates, including Trump’s former personal lawyer and fixer Michael Cohen, who served a prison sentence for lying to Congress and campaign finance crimes. Cohen was recently released from a federal prison to continue serving his sentence on home confinement over coronavirus concerns.

Berman has overseen the prosecution of two Florida businessmen, Lev Parnas and Igor Fruman, who were associates of Giuliani and tied to the Ukraine impeachment investigation. The men were charged in October with federal campaign finance violations, including hiding the origin of a $325,000 donation to a group supporting Trump’s reelection.

A Republican who contributed to the president’s election campaign, Berman worked for the same law firm as Giuliani and was tapped as U.S. attorney by the Trump administration. In that role, he won over some skeptics after he went after Trump allies.