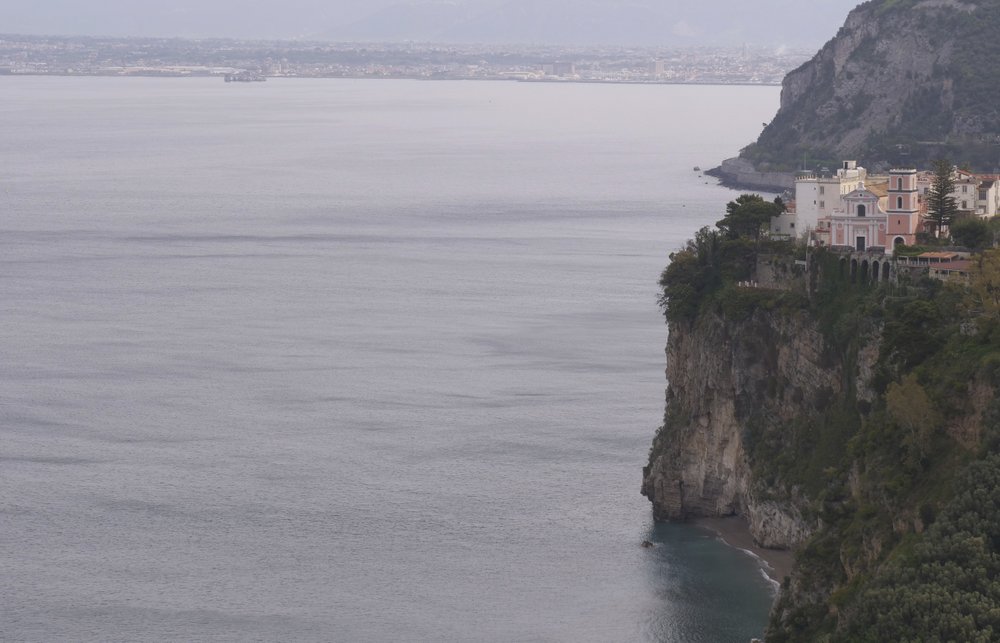 In this photo taken on Sunday May 3, 2020, a view of the town of Vico Equense overlooking the Gulf of Naples, Italy. Preliminary results from a survey of seawater quality during Italy’s coronavirus lockdown indicate a sharp reduction in pollution from human and livestock waste in the seas off Rome. Authorities stressed it was too soon to give the lockdown sole credit for the change. They say shifting sea currents and limited rainfall in April and May also could have reduced runoff from agriculture. (AP Photo/Paolo Santalucia)

FIUMICINO, Italy (AP) — Pollution from human and agriculture waste spilling into the seas off Rome has decreased 30% during Italy’s coronavirus lockdown, preliminary results from a nationwide survey of seawater quality indicate.

Authorities stressed it was too soon to give the lockdown sole credit for the change, saying that shifting sea currents and limited rainfall in April and May also could have been responsible for reduced runoff of livestock and fertilizer waste.

But Marco Lupo, director general of the Lazio region’s environmental agency, hypothesized that the evaporation of tourism starting in March could have reduced the amount of sewage produced by the 30 million tourists who normally visit Rome each year.

In addition, the lockdown meant Italians couldn’t flock to their seaside vacation homes as they normally would in spring, a phenomenon that typically overwhelms local water treatment plants and results in increased pollutants spewing into the seas, Lupo said.

“This year, coastal towns have been much less populated, decreasing the (human-caused pollution) burden” on the water, he told The Associated Press.

There’s no indication seas will stay cleaner, since the lockdown is ending and any pollution reduction may be temporary.

But scientists around the world have documented some remarkable ecological changes as a result of travel ceasing, industrial production in many countries grinding to a halt and people staying home. Air pollution is down in some of the world’s smoggiest cities, while wildlife such as coyotes and boars have been seen in urban areas.

Off Italy’s coasts, which are popular and occasionally polluted, there are visible effects of the lockdown. With the usually busy Gulf of Naples cleared of pleasure boats, cargo and cruise ships, dolphins usually only seen far out in the Mediterranean flock close to shore. Jellyfish have been spotted in the empty canals of Venice.

During the lockdown, fishermen are pulling in bigger hauls than usual off Rome’s main industrial port at Civitavecchia. In April, for example, fishermen pulled in 60,000 kilograms (132,277 pounds) of fish compared with 52,000 kilograms (114,640 pounds) during the same month last year.

Environment Minister Sergio Costa noted that the coronavirus emergency, while tragic given the loss of life, offered an unprecedented opportunity to create a “photograph” of Italy’s seas. Costa on April 15 tasked the Coast Guard and other law enforcement agencies to work with regional environmental authorities to take water samples and monitor and assess changes in the seas off Italy’s 8,000 kilometers (4,971 miles) of coastline.

The results will provide data and a baseline from which the country can reboot industrial production sustainably and create “a new normal that we know is absolutely necessary,” he said.

“This can give us a point of departure, actually a point of re-departure,” he said in a statement. “This photograph will become the point of reference for the future controls of the seas, lakes and rivers, so that nature and our country can be better cared for.”

Coast Guard Adm. Vincenzo Leone, who is responsible for the Lazio region, said it was appropriate to seize the moment to determine if an elimination of tourism and boating had a measurable effect on water quality. He described the sampling underway as a “blood test of the sea.”

“There is only one sea and we must protect it,” he said. “So when the sea talks to us, we have to listen to it.”