Despite health warnings, Trump hoping to see US economy reopened by Easter amid virus 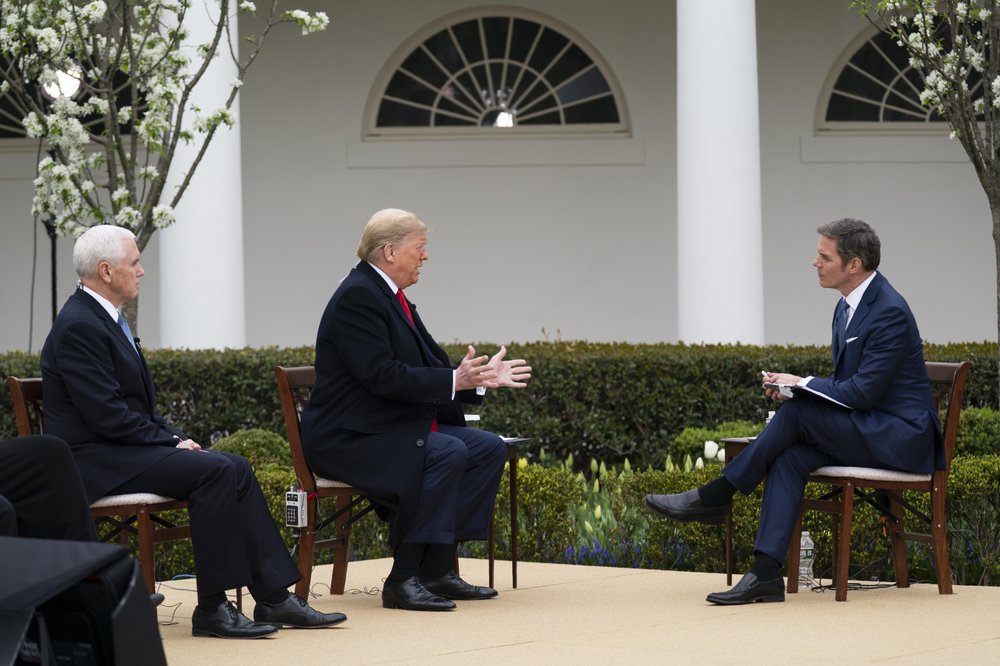 WASHINGTON (AP) — President Donald Trump said he is hoping the United States will be reopened by Easter as he weighs how to relax nationwide social-distancing guidelines to put some workers back on the job during the coronavirus outbreak.

Trump’s optimism contradicted the warnings of some public health officials who called for stricter — not looser — restrictions on public interactions. But federal officials suggested that advisories could be loosened in areas not experiencing widespread infection.

With lives and the economy hanging in the balance, Trump said Tuesday he was already looking toward easing the advisories that have sidelined workers, shuttered schools and led to a widespread economic slowdown.

“I would love to have the country opened up and just raring to go by Easter,” he said during a Fox News virtual town hall. Easter is just over two weeks away — Apr. 12.

“Wouldn’t it be great to have all of the churches full?” Trump said in a subsequent interview. “You’ll have packed churches all over our country.”

And as scientists warned the worst is yet to come — with hospital systems tested beyond their capacity and health workers sidelined by exposure — Trump addressed the nation, saying he was beginning “to see the light at the end of the tunnel.”

Trump’s comments came even as White House officials urged people who have left New York City amid the outbreak to self-quarantine for 14 days after their departure, owing to the widespread rate of infection in the metro area. It also follows on the president encouraging lawmakers on Capitol Hill to pass a roughly $2 trillion stimulus package — estimated at roughly $6 trillion once the Federal Reserve’s actions are included — to ease the financial pain for Americans and hard-hit industries.

Health experts have made clear that unless Americans continue to dramatically limit social interaction — staying home from work and isolating themselves — the number of infections will overwhelm the health care system, as it has in parts of Italy, leading to many more deaths. While the worst outbreaks are concentrated in certain parts of the country, such as New York, experts warn that the highly infectious disease is certain to spread.

The U.S. is now more than a week into an unprecedented 15-day effort to encourage all Americans to drastically scale back their public activities. The guidelines, issued by the Centers for Disease Control and Prevention, are voluntary, but many state and local leaders have issued mandatory restrictions in line with, or even tighter than, those issued by the CDC.

On Monday, the U.S. saw its biggest jump yet in the death toll from the virus, with more than 650 American deaths now attributed to COVID-19. Trump’s comments come after dire warnings by officials in hard-hit areas. New York. Gov. Andrew Cuomo said his state’s hospital system will soon hit a breaking point — resulting in avoidable deaths — even with the restrictions already in place.

“I gave it two weeks,” Trump said during the town hall from the Rose Garden. He argued that tens of thousands of Americans die each year from the seasonal flu and in automobile accidents and “we don’t turn the country off.”

When the 15-day period ends next Monday, he said, “We’ll assess at that time and we’ll give it some more time if we need a little more time, but we need to open this country up.” He added, “We have to go back to work, much sooner than people thought.”

Trump’s Easter target was not immediately embraced by Dr. Deborah Birx, the coordinator for the White House task force, who indicated any move would have to be guided by data still being collected. She suggested that public health professionals could recommend a general easing, while pushing for local restrictions to remain in the hardest-hit areas.

Trump acknowledged that some want the guidance to continue, but claimed without providing evidence that keeping the guidance in place would lead to deaths from suicide and depression.

“This cure is worse than the problem,” Trump said.

During a press briefing Tuesday evening, Trump said public health officials and economists were “working to develop a sophisticated plan to open the economy as soon as the time is right — based on the best science, the best modeling and the best medical research there is anywhere on earth.”

Trump’s enthusiasm for getting people back to work comes as he takes stock of the political toll the outbreak is taking. It sets up a potential conflict with medical professionals, including many within his government, who have called for more social restrictions to slow the spread of the virus, not fewer.

Dr. Anthony Fauci, the nation’s leading expert on infectious diseases and a member of the White House’s coronavirus task force, did not appear at the virtual town hall, but Trump denied there were any tensions between the two men.

“I will be guided very much by Dr. Fauci and Deborah,” Trump said.

At the press briefing later, Fauci said, “No one is going to want to tone down anything when you see what is going on in a place like New York City.” But he suggested he would be willing to examine the potential for easing the CDC advisories in areas that have been less affected by the outbreak.

During a private conference call with roughly 30 conservative leaders on Tuesday, Vice President Mike Pence reinforced Trump’s eagerness to lift coronavirus-related work and travel restrictions “in a matter of weeks, not months.”

When pressed on a specific timeline for lifting restrictions, Pence said there would be no formal decisions made until the current 15-day period of social distancing was complete, according to a conference call participant who spoke on the condition of anonymity to share details of the private discussion.

Pence told the group that accommodations would need to be made for the highest-risk populations if and when restrictions begin to be lifted.

Despite Trump’s rosy talk, other elements of the government were digging in for the long haul. Top defense and military leaders on Tuesday warned department personnel that the virus problems could extend for eight to 10 weeks, or even into the summer.

Army Gen. Mark Milley, the chairman of the Joint Chiefs of Staff, said during a Defense Department town hall meeting that restrictions could go into late May or June, possibly even July. He said there are a variety of models from other countries, so the exact length of the virus and necessary restrictions are not yet clear.