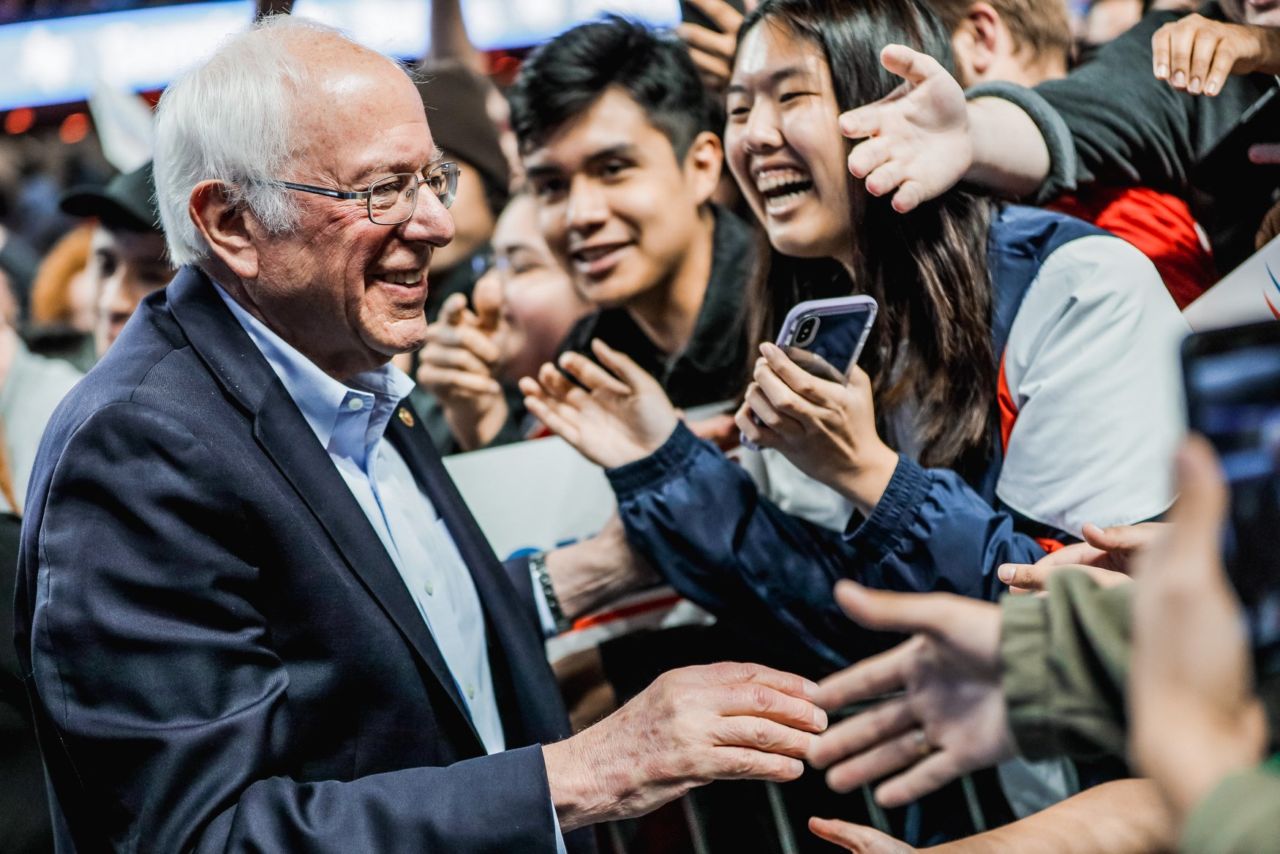 SAN ANTONIO (AP) — By the fall of 2018, when Democrats were promoting a slate of centrist candidates to topple Republicans in Congress, Bernie Sanders was seeing a very different picture.

The Vermont senator and avowed democratic socialist was convinced his most fervent supporters were as energized as ever, ready to rally around the political insurgency flag he planted in 2016. He could keep stoking the deep frustration and mistrust of the political system and attract backers who had felt too disillusioned to bother voting in the past — much like President Donald Trump had on the right.

And, most importantly, he was sure he’d have the money, enough consistent financial backing built on mostly small donations made online from around the country, to finish what he started in 2016, rising from an unknown nationally to a credible challenger to Hillary Clinton for the Democratic presidential nomination.

This time, Sanders’ movement has a political machine to propel it.

“Last time, we really did not know how this would go with our fundraising model,” said Jeff Weaver, Sanders’ senior adviser. “It ended up being $240 million, but we had no way of knowing that in the spring of 2015, so we were very slow to staff-up in early states. This time, we did things very differently. We knew we were a front-runner.”

Now everyone else knows it, too. Sanders’ lopsided win Saturday in Nevada caps his remarkable transformation from political insurgent to possibly even a favorite to face off with Trump in November. Both have campaigns built on mobilizing die-hard loyalists but also disaffected voters — even though their politics are polar opposite.

“The Trump Democrats are people that got abandoned by the Democrat Party and Bernie was straightforward about that,” said Jim Hightower, a populist former Texas agriculture commissioner who endorsed Sanders in 2016 and remains loyal to him.

Sanders’ impressive campaign bank account has helped keep many others loyal to him as well. He raised nearly $96 million by the end of last year, raked in an additional $25 million in January and has vowed to raise and spend $1 billion to defeat Trump in November. His donors are like a faucet that he can turn on as needed because they contribute in small amounts, with little concern of exceeding federal limits.

That stream of cash has also meant Sanders could build a more professional operation, with longer-range planning and better organizational structure.

His last campaign didn’t even have a human resources department, something that allowed multiple accusations of sexual harassment among staff to fester and forced Sanders to apologize before launching his 2020 bid. This time, Sanders has emphasized hiring more women and minorities to top positions, including Faiz Shakir, a Pakistani-American, who is the first Muslim to manage a major presidential campaign.

It’s a money advantage that few of his competitors can match.

Beyond money and organization, Sanders has also worked to better frame issues. After he struggled in 2016 with foreign policy, Sanders spent the years between presidential runs giving speeches about America’s place in the world and became an especially vocal critic of U.S. efforts to help Saudi Arabia fight a war against insurgents backed by Iran in Yemen.

He also worked for change within the structure of the national Democratic Party, muscling through rules changes that helped his campaign this time. “Superdelegates,” mainly elected officials and party leaders, helped Clinton secure the party’s nomination four year ago. Sanders supporters helped force a change to limit their influence during the national convention coming up this summer in Milwaukee.

And his campaign drove changes in the way that Iowa reported its caucus results by reporting voters’ first preference in addition to how many delegates a campaign won. That’s allowed Sanders to crow about edging Pete Buttigieg, the former mayor of South Bend, Indiana, in the popular vote, even though the pair essentially tied in the number of delegates awarded.

“One way to put it is the 2016 campaign was compost that the 2020 campaign has grown out of,” said Norman Solomon, co-founder of the activist group RootsAction.org and a Sanders delegate to the 2016 Democratic National Convention. “A lot of campaigns go boom and then go bust after they are over. Bernie is still booming.”

It didn’t always seem that way. Sanders joined the 2020 race with polling that was largely stable but not overly impressive, showing him among the leaders with former Vice President Joe Biden, but potentially with less room for growth than newcomers like Buttigieg.

To improve his standing, Sanders began hiring staff in Iowa, New Hampshire and Nevada far faster than in 2016 when “he wasn’t well-known and it took a while for people to catch on,” said Jane Sanders, the senator’s wife and close adviser.

“They didn’t know him throughout all of the country and that hurt,” she said. “They do now.”

Rather than introducing himself to voters, Sanders focused on attracting Iowans who traditionally didn’t vote, hiring students who lobbied their classmates. He ultimately won nine of the 13 precincts with more than 20% registered voters under 23.

Sanders also activated volunteers nationwide who supported him in 2016 and began pouring into Iowa as the election neared. By just before caucus night, his campaign said about 1,700 out-of-state volunteers had arrived.

“I think a lot of people wanted change in the Obama years and we didn’t see enough,” said Boyd Walker, a 51-year-old real estate investor who drove from his home in Virginia to volunteer in Iowa for Sanders in the weeks before the caucus. “Now we’re really ready for change.”

The campaign also concentrated on 87 satellite caucuses, sites which Sanders supporters had lobbied for and which were designed to make voting more accessible for people unable to attend traditional caucuses – which, in some cases, were college students and minority voters.

The campaign said it built similarly strong racially diverse support in heavily Hispanic Nevada, where Sanders advertised in Spanish-language media and organized more than 30 events in Spanish, including a town hall led by one of his top supporters, New York Rep. Alexandra Ocasio-Cortez.

It is attempting to do the same in California and Texas the largest states voting on March 2’s “Super Tuesday” and home to an estimated 13.5 million eligible Hispanic voters. During a Saturday night rally in San Antonio, organizers led the more than 1,500 people in the crowd — some of whom didn’t speak even basic Spanish — in cries of “Arriba Tio Bernie!”

Wooing minorities, especially African American Democrats throughout the South, was something Sanders was largely unable to do against Clinton in 2016. But his top advisers now say Nevada was a preview of their candidate’s improved appeal with people of color that can help carry him through not only this year’s primary but the general election against Trump.

Sanders’ core message, though, remains an economic one. He’s promising to reduce income inequality, appealing to Americans Sanders sees as most hurt by the current system, working-class people and those under 25 — even though they tend to vote in lower numbers.

“They are the hardest constituency to get out to vote,” Shakir said. “They’ve got other things on their mind.”

The results so far have been mixed. Sanders vowed to spark unprecedented Iowa caucus turnout and failed. Eight days later he won a New Hampshire primary that featured a record of nearly 300,000 Democratic ballots cast — but that total was inflated by the state’s voting-age population that’s increasingly rapidly.

Early in the campaign it seemed that Massachusetts Sen. Elizabeth Warren was ascendant, and Sanders adjusted. He replaced his state director in New Hampshire and in South Carolina, home to the South’s first primary.

And then there was Sanders’ heart attack Oct. 1.

“With that, I think he’s also reassessed the campaign. Similar to when you’re looking at your life and looking at a campaign, you’re trying to see what’s working, what’s not,” said Shannon Jackson, Sanders’ New Hampshire state director. “It was a great point for us to pivot and really focus on various parts of the campaign that can really hopefully lead us to victory.”

Indeed, Sanders was largely able to rebound not by overhauling his campaign, but by simply staying the same. Sanders’ top policy advisers say he focuses on making big ideas relatable to people who have felt left out of the political process.

One area the campaign had hoped to stress more this time compared to his 2016 run was Sanders’ personal side. In his announcement speech last March in Brooklyn, the senator spoke about growing up in “a three-and-a-half room rent-controlled apartment” nearby. In San Antonio on Saturday night, Sanders told a crowd about 150 miles from the U.S.-Mexico border that he understood the immigrant experience, speaking at length about his father arriving penniless in the U.S. from Poland.

While Sanders has made an undeniable connection with his voters, he hasn’t done it by revealing much about himself, something he acknowledged in an interview that aired on “60 Minutes” on Sunday.

“I’m a kind of — private person in a sense,” he said. “And … you know, I’m not particularly anxious to tell the world about everything personal in my life.”

The higher he rises, though, the harder that may become.