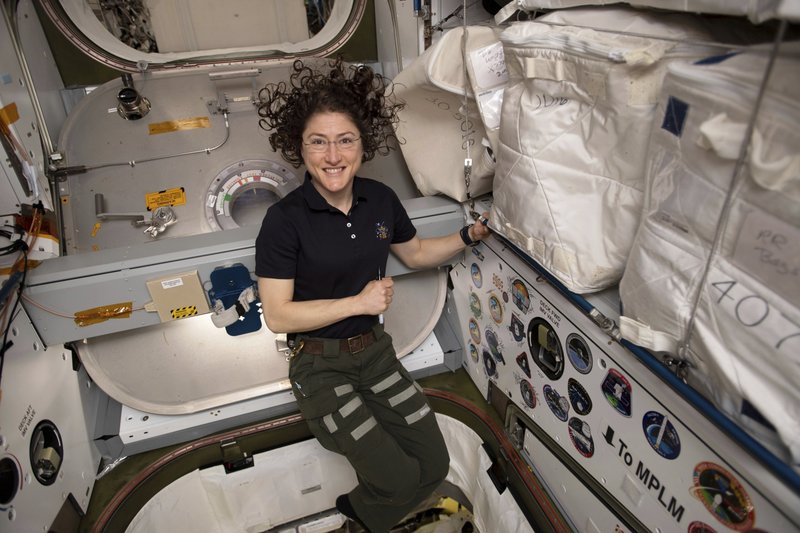 In this June 2019 photo made available by NASA, astronaut Christina Koch poses for a portrait inside of the vestibule between a SpaceX Dragon cargo craft and the Harmony module of the International Space Station. Still fresh from space, NASA's new record-setting astronaut says that aside from sore muscles and feelings of off-balance, she's readjusting well to gravity after nearly 11 months in space. Koch met with reporters on Wednesday, Feb. 12, 2020, six days after returning from the International Space Station. Her 328-day mission was the longest ever by a woman. (NASA via AP)

Christina Koch met with reporters in Houston six days after returning to Earth from the International Space Station. Her 328-day mission — which ended last Thursday — was the longest ever by a woman.

Her neck hurt for about a day. “I felt like a 2-week-old who was actually working hard to hold up my own head,” she said.

She considers herself lucky she didn’t have the sore feet and burning skin suffered four years ago by NASA’s all-time endurance champ, Scott Kelly, whose mission lasted 340 days.

Koch returned home to Galveston, Texas, to find a kitchen full of chips and salsa, something she’d craved in orbit, along with the Gulf of Mexico. She hit the beach with her husband, Bob, and their dog, a rescue pup named LBD for Little Brown Dog, just three days after her landing in Kazakhstan.

LBD was excited to see her, and vice versa.

“I’m not sure who was more excited to see the other,” Koch said.

Their reunion was recorded. “It’s just a symbol of coming back to the people and places that you love, to see your favorite animal,” she said.

The 41-year-old Koch is an electrical engineer who also has a physics degree. She flew to the space station last March and was part of the first all-female spacewalk in October. Three astronauts remain at the orbiting lab, including the other half of the all-female spacewalk, NASA’s Jessica Meir.