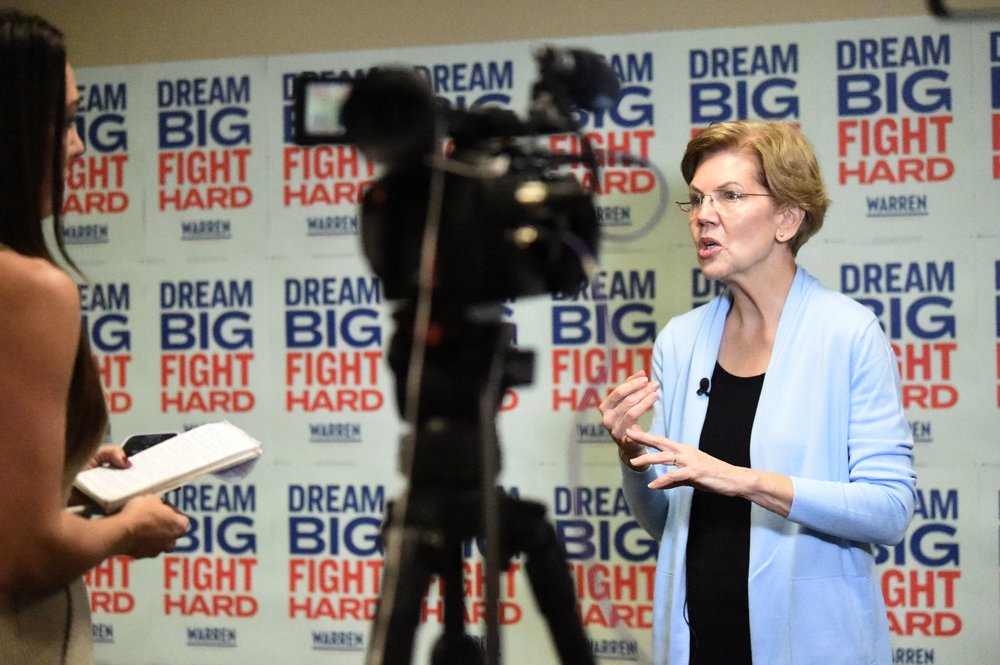 CHARLESTON, S.C. (AP) — Elizabeth Warren said Sunday she believes Americans are ready for a presidential ticket with two women at the top, rejecting concerns from some Democrats that a woman can’t beat President Donald Trump.

“Sure, why not?” the Democratic presidential candidate told The Associated Press in an interview ahead of a town hall campaign event in Charleston. “I think (voters) would support a lot of different combinations.”

In the aftermath of Hillary Clinton’s 2016 defeat, some Democrats have expressed hesitation about nominating another woman to take on Trump in 2020. But Warren argued that women notched historic wins during the 2018 midterms, suggesting voters are worried less about gender than the message candidates are offering.

Her comments come less than a week after California Sen. Kamala Harris abruptly dropped out of the race, prompting debate about whether a party that says it values diversity is shortchanging candidates of color and women. Other than Warren, the Democratic top tier is currently all male. They are also all white.

Warren has said she’d consider tapping Harris as a running mate. She also told the AP she would be “open” to asking former Vice President Joe Biden to reprise his old job.

“Look, it would be presumptuous of me to be talking about individuals, but I’m open to getting this right because that’s what we want to do,” Warren said. “We want to build a Democratic ticket and a stronger Democratic Party that’s ready to get out there and compete at the national level, at the state level, at the local level.”

Her openness to teaming with Biden is notable because the two candidates represent distinctly different visions of the Democratic Party’s future. Warren has embraced calls for systemic reforms to the nation’s economy and health care. Biden has urged more pragmatic approaches and has specifically rejected Warren’s $20 trillion plan to transition the U.S. to a single-payer health care system as unworkable.

Biden has the advantage in South Carolina, where he’s leading in the polls because of his deep ties to the black community. He told the AP in October that Warren “doesn’t affect my strategy, period” in the state.

But her trip to South Carolina on Sunday suggests she won’t cede the state to Biden. She has upped her efforts to appeal to black voters, especially women. She delivered a well-received speech at a historically black college in Atlanta last month and a group of more than 100 black female activists endorsed her candidacy.

In the interview and the town hall that followed, Warren went after her billionaire opponents, particularly former New York City Mayor Mike Bloomberg. She has decried his multimillion-dollar ad spending as a way to try to buy the election, especially considering his decision not to compete in early-voting states, including South Carolina.

“The problem with the billionaires is that there’s just no limit on how much they can spend. They can reach in their pockets and just spend and spend and spend,” Warren told the AP. “That means they get to buy a bigger share of democracy than anyone else, and that’s a real problem.”

But Warren said the problem extends to candidates willing to hold big-dollar fundraisers in lieu of relying on a small-dollar donor base, referring to recent criticism she levied against fellow Democratic hopeful Pete Buttigieg.

Regardless of who emerges from the crowded Democratic field, Warren said the party will have to find ways to attract Republicans who are disenchanted by Trump’s presidency.

“I think we’ve got a path to victory, and I think the energy and enthusiasm of women is really what’s going to carry us across the finish line with a good margin.”

She said women will “not only help us win the White House but, just as has been happening, help us win up and down the ticket.”

Meg Kinnard can be reached at http://twitter.com/MegKinnardAP