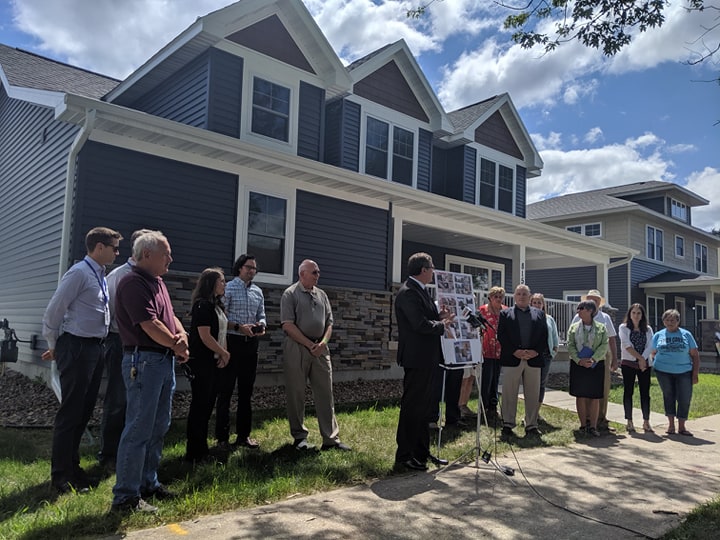 A block in La Crosse got the full Cinderella story. In 2015, the city bought six worn-down homes on sixth street and demolished them. Spies Construction bought the vacant lots to build new homes that added to the value of the city.

When the city first acquired the dilapidated homes, they had a total value of $442,096. Spies Construction build twin home units and two single-family homes valued at more than $930,000.

“These events never get old because it focuses and shows the results of all of the years of hard work and dedication,” La Crosse Mayor Tim Kabat said.

The construction brought new families to the area like Chris and Danelle Larson from north-central Minnesota who have two young children and one on the way. They were welcomed to the community Tuesday.

“I just wanted to thank La Crosse for this warm welcome,” Chris Larson said. “We are new here, and it has been like a dream for us. Thank you.”

The Larsons closed on their house Tuesday. They say they chose the area because of the home’s unique design and the La Crosse Promise Program which gives up to $50,000 dollars in college scholarships per family. Any buyer who purchased one of the homes was eligible for the La Crosse Promise program. Additionally, the La Crosse County grant program helped with the project by deferring some of the costs required to build new in the City, like the cost of new sewer and water laterals.

The city said the homes they destroyed had a blighting influence on the neighborhood. Joe and Courtney Smith were looking to move to La Crosse from Winona. They were hesitant about the area when the heard what the neighborhood used to be like but took the leap in October.

“Building our house was amazing,” Joe Smith said. “It went actually more smoothly than we would have ever hoped. We love our house. We love the location, and it has proven to be a very safe, comfortable living environment since we’ve been here.”

The Smiths were excited to finally have other families move into the area this week.