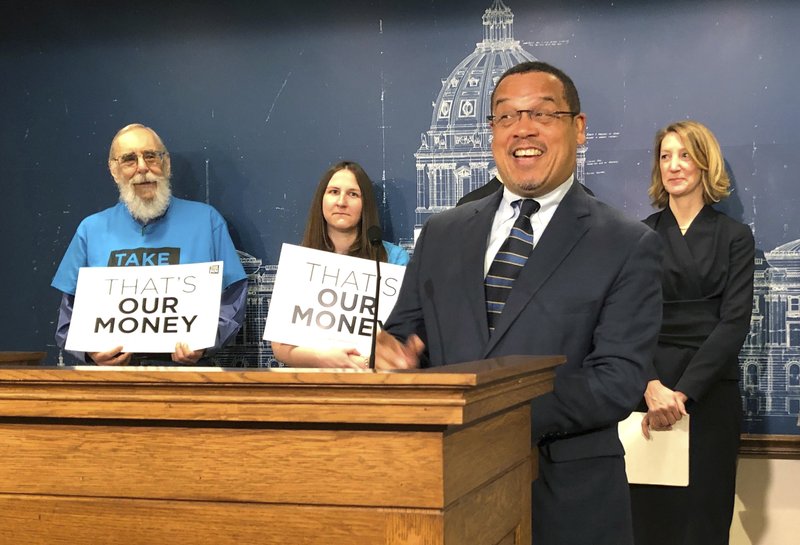 ST. PAUL, Minn. (AP) — Attorney General Keith Ellison called on lawmakers Tuesday to reverse a consequence of 2017 law that repealed Minnesota’s ban on for-profit health maintenance organizations, saying for-profit companies could pocket billions in assets now held by the state’s nonprofit HMOs that should be spent on health care instead.

“This issue of HMO conversion can sound a little complicated but it’s actually pretty simple,” Ellison said, pointing to a sign carried by a supporter standing nearby at his news conference. “That’s our money.”

As nonprofits, Ellison pointed out, HMOs pay little to nothing in taxes. Minnesota granted those tax breaks, protected them from competition from for-profit companies, and gave them exclusive rights to run public health care programs in the expectation that they would act in the public interest, he said. By the end of 2018, he added, Minnesota’s nonprofit HMOs held about $6.7 billion in reserves, about $300 million more than at the end of 2017.

“The only appropriate use of that money is for improving the health of all Minnesotans,” the attorney general said. “We need to pass some controls now to make sure that if or when an HMO converts from nonprofit to for-profit status that money stays in Minnesota.”

Rep. Tina Liebling said the repeal, which effectively ended a requirement for nonprofit HMOs to use their assets for health care, was slipped into a larger insurance bill late in the 2017 session, when Republicans controlled both chambers, and its origin remains a mystery.

“I’ve asked many people, ‘Who asked for that provision to be repealed?’” said Liebling, a Rochester Democrat who chairs a health and human services finance committee. “I’ve gotten no answer from anyone. Nobody wants to take responsibility for having asked to repeal that language.”

A two-year moratorium on nonprofit HMOs converting themselves into for-profit plans runs out July 1. Language to guard against the feared effects and restore the ban on for-profit HMOs is part of a broad health and human services bill that will be debated on the House floor Wednesday.

“Minnesota and Minnesota’s taxpayers stand to lose a lot of accumulated assets that are about to walk out the door if we don’t do something about it this session,” Liebling said.

Liebling said they want to prevent a repeat of what happened after the 2017 bill became law, when one of Minnesota’s biggest insurers, Medica, transferred $120 million from its nonprofit Minnesota HMO to its for-profit operations elsewhere. Minnesota regulators approved the transfer, given the new law.

Ellison said he couldn’t comment on whether he might try to claw back that money but his office “is extremely well aware of this issue” and is looking into it.

The Minnesota Council of Health Plans has expressed concern about the new legislation. Pat Riley, the group’s interim CEO, said none of her members are contemplating converting to for-profit plans, and they support extending the moratorium on conversions, as the legislation would do. But she said they want a level playing field if any for-profit plans start offering plans in Minnesota, so that all provisions that apply to nonprofits also apply to for-profits.