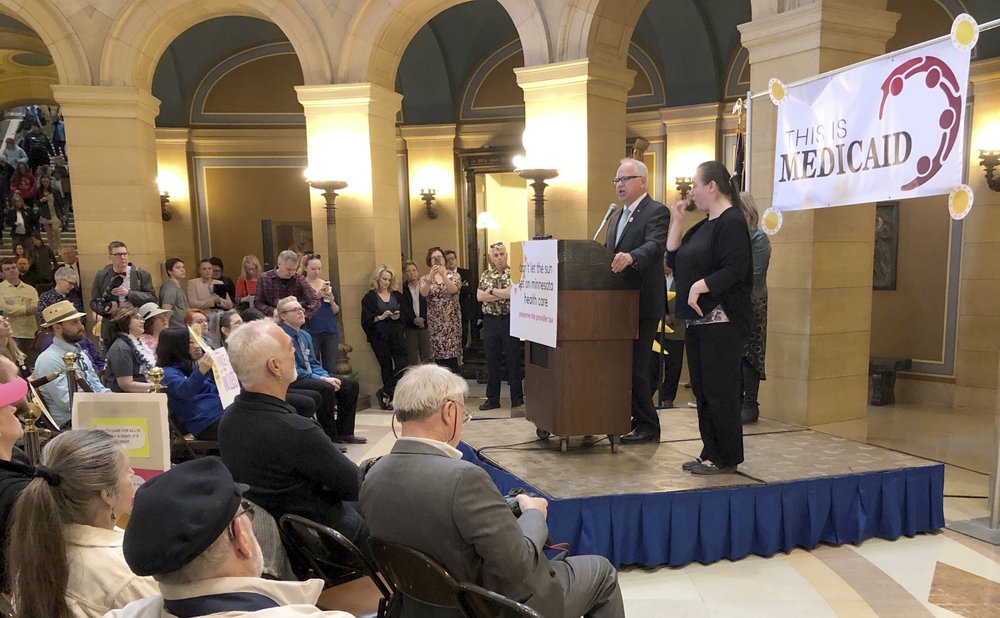 ST. PAUL, Minn. (AP) — Gov. Tim Walz turned up the heat Thursday on GOP lawmakers to try to prevent the state’s 2 percent tax on health care providers from expiring at the end of the year, a revenue stream that helps fund health care for low-income Minnesotans.

Speaking at a Capitol rally, the Democratic governor urged lawmakers not to jeopardize the care of 1.1 million Minnesotans and not to blow an eventual $1 billion hole in the budget by letting it lapse. Preserving the tax is especially crucial now, he said, “when we know we do not have a dependable partner in the federal government on anything, especially health care.”

The tax, which raises about $700 million annually, goes into the state’s Health Care Access Fund. From there it helps pay for Medicaid, the MinnesotaCare program for the working poor and other health programs. The Legislature passed the tax in 1992 under Republican Gov. Arne Carlson to fund MinnesotaCare. The GOP-controlled 2011 Legislature voted to let it expire at the end of 2019, and Democratic Gov. Mark Dayton acquiesced to end a 20-day government shutdown.

Now, the Legislature needs to decide what, if anything, to do about it. As with most difficult issues this session, Walz can count on support from the Democratic-controlled House but needs to find a way to work with Senate Republicans, who have a narrow three-vote majority. And Republican leaders are adamant that the tax should expire. The governor said he’s willing to compromise, but only to a point.

“I am not willing to compromise people’s health or sacrifice our values in the sake of some fake bipartisanship,” he said

House Minority Leader Kurt Daudt told The Associated Press that keeping the tax would raise health care costs. He said the state can squeeze enough money out of other sources to fund health care programs for people who really need them.

“We think there’s enough money the system already to fund the people that needs these dollars, but unfortunately we’ve got people accessing the dollars that don’t need them,” he said.

Walz told reporters that Republicans are waging “an ideological fight” and that their claims are “patently false.” He said the tax made Minnesota “one of the states with the highest insured rates and the best health care outcomes. That is not by accident — that is by plan.”

The governor said he hadn’t seen but was willing to look at an alternative funding mechanism floated Thursday by a bipartisan quartet of senators, Republicans Jim Abeler, of Anoka, and Scott Jensen, of Chaska, and Democrats Melisa Franzen, of Edina, and Matt Klein, of Mendota Heights.

They introduced a bill backed by the Minnesota Medical Association, which represents the state’s physicians, that would tax insurance claims paid by health plans and third-party administrators. They said it would be fairer than the provider tax because it would not be passed on to individuals who are uninsured or are paying out-of-pocket expenses, and that it would be easier to administer because far fewer entities would have to pay it.