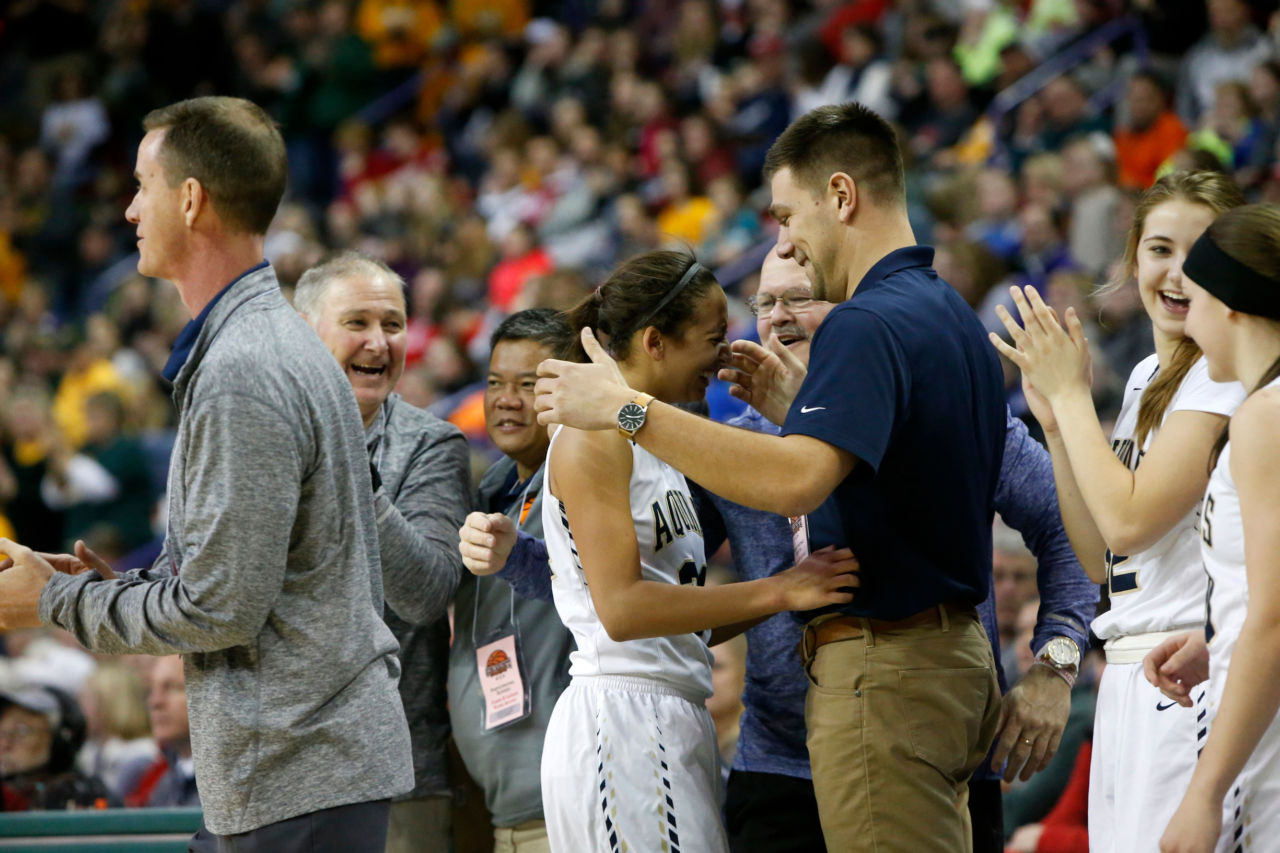 GREEN BAY, Wis. — There’s a unique dynamic the Aquinas High School girls basketball team has, that maybe no other team does.

As the top-ranked Blugolds (25-1) get set to play in the Division 4 state semifinals at 6:35 p.m. tonight against No. 7 Milwaukee Academy of Science (19-5) , part of this team’s success the last five seasons, has been because of assistant coach Lucas Morrissey.

Aquinas head coach Dave Donarski describes Morrissey as a humble guy, who will take little or no credit for the team’s success. In fact, Morrissey’s not going to be happy learning his team conspired to give him credit with this story.

But the relationship Morrissey has with this team is special.

While Aquinas tries this weekend to repeat as state champions at the Resch Center — it lost the state championship two seasons ago by one point — Morrissey can relate to it all.

The Aquinas girls finished the 2017 season 27-1 after losing to Howards Grove 44-43 in the aforementioned state championship.

In 2008, Morrissey scored 17 points in leading the Blugolds to a state championship, 70-51, over Iola-Scandinavia, finishing the season 24-3.

Last year, the Aquinas girls capped off a 28-0 season, beating Melrose-Mindoro (27-1) 68-52 — a rematch that likely could happen Saturday.

Throughout all this time, Donarski has been with Morrissey. He was the boys assistant coach for a decade. Coach remembers Morrissey as a freshman that needed a little motivation.

“I never felt like he worked hard enough,” Donarski said. “I always dogged him because I had him running first day of practice. I thought he was lazy and didn’t work hard enough, and here he turns out to be one the best players that has ever played (at Aquinas).”

That wasn’t Donarski taking credit. It felt more like he was a little embarrassed being so hard on a 14-year-old freshman who turned out to be such a great player and great person.

On the boys team, Morrissey finished 70-7 for his career. Now with the girls the past five season, Aquinas is 120-12 overall with Donarski and Morrissey coaching.

Morrissey went on to play three seasons at UW-La Crosse, after transferring from UW-Eau Claire. While there, he finished senior year the team MVP, leading the Eagles in rebounding, blocks and was second in steals and points. Morrissey was first team all-WIAC as well as named to the all-WIAC defensive team — one of only three UW-L players ever at that time.

So, as a coach, Morrissey brings a couple things to the Lady Blugolds Donarski admits he, himself, cannot.

“There’s something about his youth and he’s played a lot closer proximity to the game than I have,” Donarski said. “He has a players’ perspective. He brings a dimension we need. If he’s ever thinking of quitting, we won’t let him.”

Morrissey also brings something else — a ridiculous athleticism, a 6-foot-5 frame and a guy who landscapes all spring and summer (AKA: he’s in shape). There might not be a girls coach in the nation with a better leader of the scout team.

Blocks off the backboard and breakaway dunks are not uncommon.

“He’s swatted me so many times,” junior guard Lexi Donarski said. “I’m just going up for a layup and, ‘Oop, there he is.’

“That’s helped me a lot actually, as a player. I’m not going to be going against 6-foot-5, or whatever, girls that are as long as him.”

But, it’s not completely one sided. This is, afterall, a team that’s 80-2 over the past three seasons, including a 44-game win streak that only ended when playing the 20th-ranked team in the nation that had the No. 1 recruit in the 2020 class.

In other words, every once in awhile one of those girls scores on Morrissey, as Lexi Donarski has done, and that’s what really gets the team laughing.

“So when Lex does hit a shot on him, then she starts popping off to him,” coach Donarski said. “It’s a cool relationship. It really is a big brother type of thing.”

But it isn’t like Morrissey is out there on the practice court reliving his glory days on a bunch of high school girls. He’s coaching them. Teaching them.

“He gets it, too,” coach Donarski said. “He understands how to make kids better and forces them to do stuff they may not be as great at.”

So, yeah, once in awhile that’s with a dunk or a blocked shot, but more often than not, it’s the intangibles he brings and experiences in high school and college he’s had. But being 6-5 athletic freak doesn’t hurt.