Happ benched, Badgers get boost from Davidson, Iverson in win over Illini 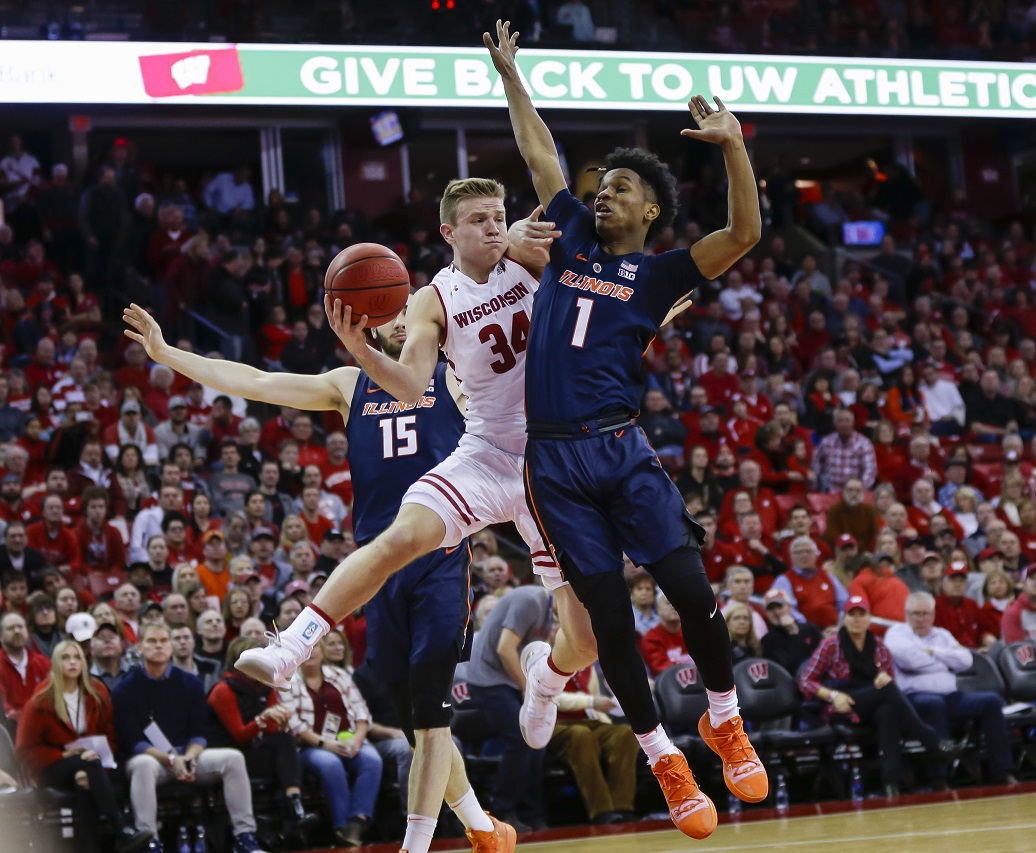 MADISON, Wis. (AP) — With leading scorer Ethan Happ struggling, Wisconsin coach Greg Gard benched his star down the stretch and looked for someone else to lead the Badgers past Illinois.

Davison scored 18 points, Iverson added 16 and the No. 22 Badgers held off Illinois 64-58 on Monday night, as Happ was benched the final four minutes.

“So many nights he’s carried us,” Gard said of Happ. “Tonight we had to have other people carry him.”

Happ, who averages 18 points, scored just six points on 3-of-7 shooting. He was 0-for-3 from the free-throw line and had three turnovers.

Happ also has proven a liability from the line in crunch time in past games, shooting less than 45 percent. Gard, however, said he benched his senior because of his decision making, not his struggles from the line.

La Crosse native Kobe King played 20 minutes off the bench. The redshirt freshman was 1 of 4 from the field, all 3-pointers, and 1 of 2 from the line. He also had a rebound and a turnover.

King is now averaging 4.3 points on 48.8-percent shooting from the field and 37.1 percent from deep to go with 2.2 rebounds.

Last season, the Central High graduate played just 10 games for the Badgers before fracturing the patella on his left knee. Had he played one more game, he would not have been eligible for a medical redshirt.

The turning point in the game came from the Davidson-Iverson pair.

First, it was Davidson that gave the Badgers the lead for good, 54-52, with 3:21 remaining with a jumper. On the next possession, Iverson blocked Giorgi Bezhanishvili, and Davidson took the loose ball for a layup to go up 56-52 with 2:45 to go.

From there the teams traded blows until Nate Reuvers’ putback dunk on a missed 3-pointer gave Wisconsin a 62-58 lead. Iverson then stole the ball on the next Illinois possession following a timeout, helping put away the game.

Iverson said Wisconsin coaches told the Badgers which inbounds play they thought Illinois might run and called it correctly.

“I was just trying to anticipate when he was going to throw the ball in,” Iverson said. “I think I’m pretty quick, and I just threw my hand up there.”

“They’re a lot more than Ethan Happ, and I think we’re the one team that’s a little bit different in Big Ten play,” Underwood said. “We’re going to pick you up and get after you earlier and maybe Ethan doesn’t get those spots.”

Aaron Jordan finished with 12 points for the Illini, while Ayo Dosunmu added 11 and Bezhanishvili 10.

As exciting as the finish may have been, it was an ugly beginning offensively for both teams. The Badgers hit just 3 of 16 to start and didn’t crack double digits for scoring until 6:42 left in the first half. But Illinois wasn’t much better at 4 of 13 to start. Wisconsin’s offense didn’t generate much excitement until Iverson’s putback dunk at the buzzer to pull the Badgers within 26-25.

D’Mitrik Trice’s 3 to open the second half gave the Badgers their first lead of the game. It also was Trice’s first bucket after missing three shots on Wisconsin’s first three possessions. Gard said those early misses weren’t bad shots, either. “The two or three that Trice had, he’s not that open if he’s in the gym by himself,” Gard said, adding his confidence waned after the early misses.

BACK, BUT NOT THE SAME

Illinois’ Trent Frazier left the game early in the second half after tangling with Davison on the Badger’s layup attempt. Davison appeared to come down on the back of Frazier’s ankle, and he was helped off the court and back to the locker room. But he quickly returned to the bench and was back in not long after, though Underwood said he “didn’t quite have the same pop in his game.” He finished with eight points after shooting 3 for 10 for the game, including 1 for 4 in the second half after returning.

Illinois: The Illini had won four straight coming in and were looking for their first five-game conference winning streak since 2013. Instead, they lost their 15th in a row to the Badgers, the longest streak to any Illinois opponent.

Wisconsin: The Badgers snapped a two-game losing streak and proved they could win in a grind-it-out game with Happ on the bench.

Wisconsin: Travels to Northwestern on Saturday.